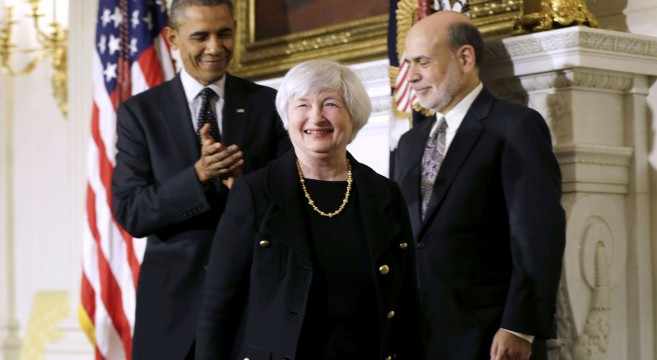 On Wednesday President Obama nominated Janet Yellen, 67, as head of the U.S. Federal Reserve.  Yellen, the current Vice Chair of the Federal Reserve, was one of the first to spot the bubble and how much damage it could cause the economy.  “The Fed” as it’s come to be known, is the most powerful central bank in the world, and Yellen’s confirmation on February 1, 2014 will make her the most powerful woman on Earth.

“She’s an excellent choice, and I believe she’ll be confirmed by a wide margin,” Charles Schumer of New York, the Senate’s No. 3 Democrat, said in a statement.  Senate Banking Committee Chairman Tim Johnson, a South Dakota Democrat, pledged to work “to move her nomination forward in a timely manner,” saying her depth of experience is unmatched.  Bloomberg News writes: “As a top deputy to Bernanke, Yellen supported the central bank’s unprecedented bond buying programs and was a driving force behind a new strategy adopted in 2012 to commit the central bank to goals on inflation and unemployment.  ‘It’s hard to imagine a better choice by virtue of intelligence, temperament, demonstrated good judgment, understanding of the Fed, and extensive experience,’ said Alan Blinder, a Princeton University professor and former Fed vice chairman. ‘She should make a great Fed chair.  Larry Summers also welcomed the decision, saying that ‘Janet Yellen is a terrific choice to lead the Federal Reserve.  I have admired and learned from her ever since she taught my first macroeconomics graduate class in 1976,’ he said in an e-mail.  As the Fed’s No. 2 official, she has articulated the case for maintaining highly accommodative monetary policy.  In a series of 2012 speeches, she outlined why interest rates could remain near zero into late 2015, and in a 2011 speech she justified the Fed’s first two rounds of large-scale asset purchases with an estimate that the programs would create 3 million jobs.”

When Yellen failed to get tenure at Harvard in 1976, she packed her bags and moved to Washington and took a job as a staff economist in the Fed’s division of international affairs.  That’s where she met her husband George Akerlof, and together they went to the London School of Economics and then the University of California at Berkeley.  The husband and wife duo specialize in the labor market, and together they wrote more than a dozen papers focussing on the mechanics of how people switch jobs, and the complexities that manifest when workers perceive their wages as unfair.  In 1994 Yellen was appointed by President Bill Clinton to the Fed’s Board of Governors, while her husband went on to win the Nobel Prize in Economics.  In 2004 Yellen became President of the San Francisco Fed.  Her confirmation on February 1, 2014 will make her the very first woman to head the Federal Reserve in the institution’s 100-year history.