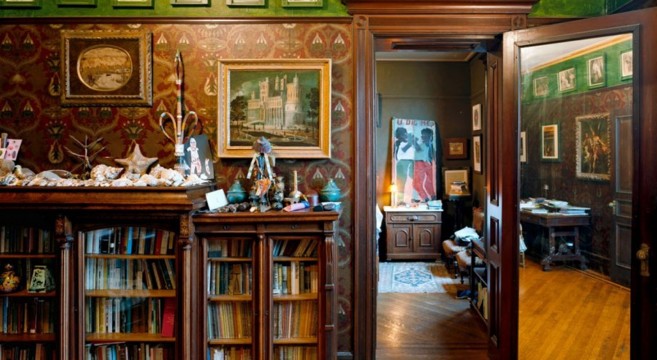 Built between 1883 and 1885, the Chelsea Hotel opened for initial occupation in 1884, and the 12-storey red brick building was one of the city’s very first co-op apartment buildings.  Jack Kerouac wrote On The Road (1957) while living in the Chelsea, and Arthur C. Clarke wrote 2001: A Space Odyssey (1968) while living there as well.  It is also where writer Dylan Thomas was staying when he died of pneumonia on November 9, 1953, and where Nancy Spungen (girlfriend of Sid Vicious of the Sex Pistols) was found stabbed to death on October 12, 1978.  Joni Mitchell, Edith Piaf, Rufus Wainwright and numerous other musicians also called the Chelsea their home.  In the early 80s Madonna lived here too, and returned in 1992 to photograph her book SEX in room 822.  Frida Kahlo, Robert Mapplethorpe, Jasper Johns, and Willem de Kooning are some of the renowned artists who called the Chelsea home, while Andy Warhol’s “Warhol Superstars” added to the legend of the famed hotel as well.

Recently VANITY FAIR published a revealing series of images taken by photographer Robert Polidori, and you can browse the gallery in full below, with captions courtesy of VANITY FAIR.  To learn more about another iconic New York hotel, The Algonquin, CLICK HERE.

Previous post:
In Four Months This Woman Will Be The Most Powerful Woman On Earth Next Post:
Tilda Swinton Is Furious With Harvey Weinstein & His Senseless Snowpiercing Scissors