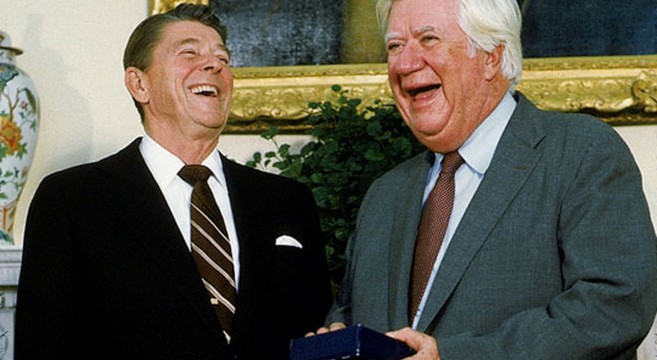 In light of the U.S. government shutdown that has been caused by the partisan conflict between Democrats and an in-fighting Republican party, it’s hard to imagine a time in Washington’s history when there was productive peace.  How can two fiercely opposed sides of American government possibly thrive by meeting in the middle and achieving long-lasting legislative results for the American people?  To find the answer all one has to do is study the relationship between Republican President Ronald Reagan and Democratic Speaker of the House Tip O’Neill.  Although the pair faced off in numerous battles on Capitol Hill, they also shared a strong admiration and respect for one another that evolved into a beautiful friendship.

NBC’s Chris Matthews served six years as Speaker O’Neill’s Chief Of Staff, and in those years Matthews was given a front row seat to one of the most extraordinary friendships in modern Washington history.  In a recent interview with Charlie Rose, Matthews tells the story of his first encounter with President Reagan when Reagan walked into one of the Speaker’s offices in the House just before he was to deliver the 1982 State of the Union address.  Matthews introduced himself, and said lightheartedly: “Mr. President, welcome to the room where we plot against you.”  Reagan replied: “Oh no, not after six.  The Speaker says we’re all friends after six.”  Matthews goes on to share some other remarkable stories, including an extraordinary description of what happened hours after Reagan was badly shot in March 1981.  The President’s then Chief of Staff Jim Baker made certain that Tip O’Neill was the very first politician to be granted access to Reagan’s bedside as soon as Reagan’s family had left the hospital room.  What happened inside that room is not only enough to make your eyes moist, it may also be enough to give one hope that the power players in the Washington of today can someday learn how to be as civilized as these two men were not so many years ago.

The story of Reagan and O’Neill’s unlikely friendship is chronicled by Chris Matthews in his brand new book Tip And The Gipper: When Politics Worked.  You can purchase your own copy via Amazon, and be sure to watch Matthews’ brilliant conversation with Charlie Rose below.