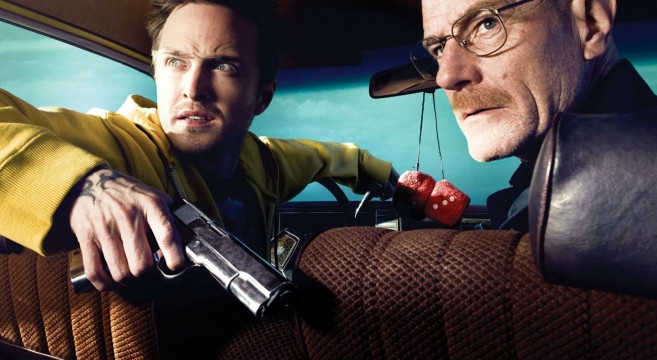 It is by far the most highly anticipated television series finale in years, and when Breaking Bad wraps up this coming Sunday night, it will be one for the record books.  But not in the ways you might think.  In a feature story published earlier today by Forbes, Brad Adgate, SVP for Research at Horizon Media, predicts the episode will draw a whopping 8 million viewers.  Adgate, one of the most trusted analysts in the television business, predicts an audience of 8 million viewers — easily a record for the show, but nowhere near the records reached by other giant television series.  Forbes writes: “[The biggest cable finale record breakers would be the] finales of ‘The Sopranos’ (June, 2007, 11.9 million) and ‘Sex and The City’ (Feb, 2004, 10.6 million) — both of which were all the more impressive given that both aired on HBO, a paid service.”  Adgate adds: “Coming off its first Emmy Award for Best Drama, I think the finale will attract 8+ million viewers,” says Adgate.  “While it’s not ‘M*A*S*H’ or ‘Cheers’ it should do better than recent broadcast finales.  ’30 Rock’ was 4.8 million and ‘The Office’ 5.7 million earlier this year.”  You can read the full story by visiting Forbes.com.