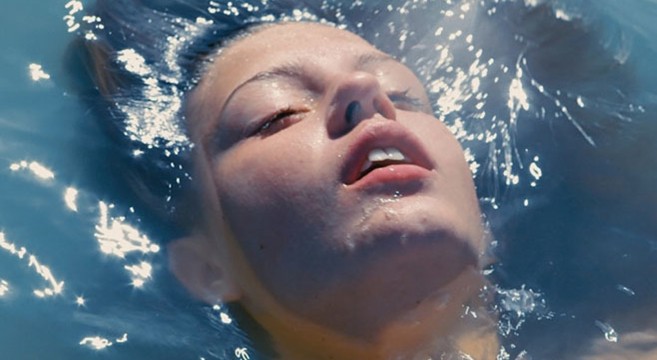 Directed by Abdellatif Kechiche, and based on a graphic novel by Julie Maroh, when Blue Is The Warmest Color bowed at this year’s Cannes Film Festival it went home with the grand prize Palme D’Or.  Steven Spielberg was the president of the Cannes jury which awarded the top prize.  Marlow Stern of The Daily Beast is just one of the critics praising the remarkable film.  Stern lays out the film’s synopsis: “‘Blue’ tells the story of Adèle (Adèle Exarchopoulos), an awkward but beautiful 15-year-old girl whose initial sexual forays leave much to be desired.  All that changes when she crosses paths with Emma (Léa Seydoux), a blue-haired college student studying art. It’s love—or is it lust?—at first sight, and before long, the two are inseparable.”

Earlier this morning the film got its very first North American trailer which you can watch below.  It bypasses the crude subtitles which normally litter the trailers of most foreign films, and chooses instead to focus on the atmosphere of the film’s romantic power, highlighted by the amazingness that is BEACH HOUSE and their stunning song “Take Care”.  Blue Is The Warmest Color opens in North America on October 25th.

Previous post:
Paul Koudounaris’s Mindblowing Photos Of Diamond-Encrusted Skeletons From The Catacombs Of Europe Next Post:
The Real Reasons Why Fall/Winter Has Two Different Names