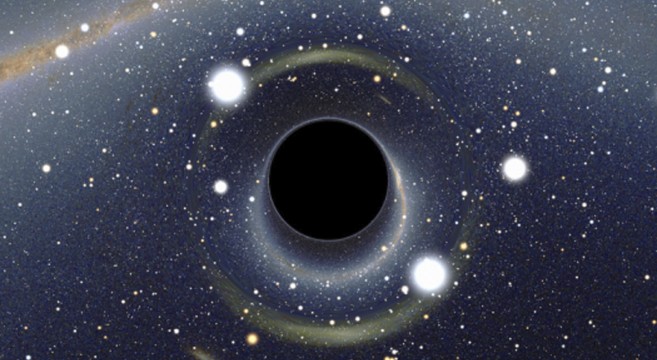 Universe May Have Formed From Collapse Of A 4-Dimensional Star

The Big Bang theory has come to be the most trusted theory in explaining the birth of the Universe.  In short form, the Big Bang theory speculates that the Universe started with an infinitely dense clump of matter that began cooling and expanding.  This cooling, in turn, is what led to the formation of subatomic particles, stars, planets, and lemurs.  The theory, however, is by no means perfect.  Among the theory’s blank spaces are: 1) it’s unknown what could trigger an ultradense pinpoint of matter to explode outwards, and 2) the Universe is almost of universal temperature throughout (something that doesn’t jive well with the Big Bang thesis).  As of this morning, however, a brand new credible idea has been put forth which may answer the mystery.

Experts believe a new possible explanation is that the Universe was born out of the collapse of an insanely complex 4-dimensional star — the likes of which is not just more impossible than you imagine — it’s more impossible than you can imagine.  In conventional understanding, a typical black hole is 3-dimensional, with an event horizon “membrane” of 2-dimensions.  In this new theory, this 4-dimensional black hole had an event horizon membrane of 3-dimensions.  The theory’s abstract reads: “In that model, our three-dimensional (3D) Universe is a membrane, or brane, that floats through a ‘bulk universe’ that has four spatial dimensions.  [The] team realized that if the bulk universe contained its own four-dimensional (4D) stars, some of them could collapse, forming 4D black holes in the same way that massive stars in our Universe do: they explode as supernovae, violently ejecting their outer layers, while their inner layers collapse into a black hole.”

But don’t call your mother with the big news just yet.  For instance, the European Space Agency recently detected fluctuations in ancient microwaves which matches up well with the Big Bang theory, but not with this new 4D Collapsing Star theory.  You can read the full story by visiting PopularScience.com and Nature.com.  And as an added footnote, there are more stars in the Universe than there are grains of sand on Earth.

Previous post:
Homeless Boston Man Who Returned $40,000 In Lost Money Is Getting The Karma Shock Of A Lifetime Next Post:
SOLANGE’s “Lovers In The Parking Lot” Is My Favorite Thing In The World Right Now