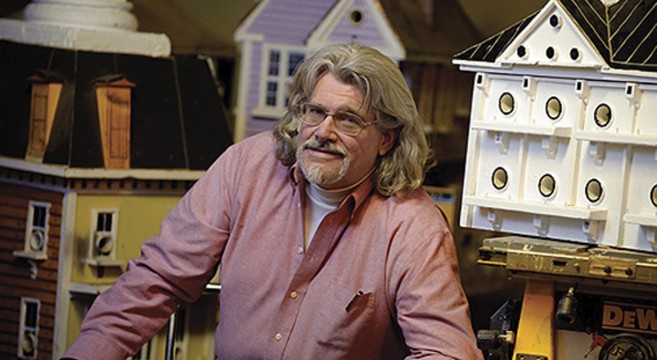 Tom Burke spent 25 years building custom homes with his father in Delaware.  He still builds houses but now his business card reads: “Builder of Fine Bird Homes.”  Burke combines his craftsman’s skills with an artistic bent to create replicas of historic buildings or a client’s home.  “These birdhouses are whimsical, not architectural reproductions,” says Burke, whose custom work can be spotted in yards all around Wilmington.

From a workshop in the basement of his Delaware Avenue condo building, Burke has been crafting birdhouses that are as impressive as the homes they replicate.  The bird that nests in one of his multi-room creations may enjoy features such as a Palladian window, cedar-shingle roof, or clapboard siding.  A Delaware native, Burke came of age in the ’60s and loves to talk about those freewheeling days.  He attended maritime school in New England and after a stint in college, went to work in his father’s construction business.  In the 1970s he lived in Chadds Ford, where he was a regular with the Chadds Ford Inn’s artsy crowd.

His ties to Chadds Ford inspired his most ambitious project so far.  For the past several years Burke has poured his energy into creating some of the iconic houses that artist Andrew Wyeth painted in his best-known works.  Before Wyeth died earlier this year, Burke had completed six, including Chadds Ford landmarks such as Kuerner’s farm, the John Chads house, and the N.C. Wyeth studio — as well as the Maine farmhouse depicted in Christina’s World.  You can watch Tom’s story in the following CBS Sunday Morning profile, and to enter Tom’s world be sure to visit TFBurkeBirdHomes.com.