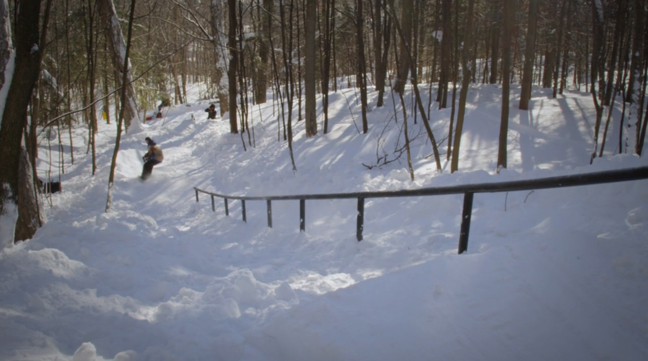 On Thursday December 27th Montreal got its ass whipped by an epic snowstorm that would have crippled most cities in the modern world. 45cm (18 inches) of snow fell within 24 hours, grinding most of the city to a semi-halt. A local snowboarder, however, took the opportunity to walk to the top of the city’s Mont Royal Park (a 730-foot-tall mountain in the centre of the city, designed in the late 1800s by Frederick Law Olmsted, the same designer as New York’s Central Park and San Francisco’s Golden Gate Park) with his snowboard in hand.

Seb Toots (a.k.a. Sebastien Toutant) is a competitive snowboarder from Montreal, and together with a crew from Sunset Films, they documented the journey from mountaintop straight down the southern slope into the downtown core (although I did spot some shots filmed on the northern and eastern sides of the mountain as well). XX-cellent job guys! For all things Seb Toots be sure to visit SebToots.com and follow him on Twitter.

In case you didn’t know, Montreal is also a world-class snowboarding mecca, with many A+ hills within a close drive. I’ve been thinking a lot these days about taking snowboarding more seriously, which means getting my hands on a great snowboarding jacket. A friend of mine recently sent me a link to a ranking of the top ten snowboarding jackets on the market, and it’s helped me a lot. You can see the full list by CLICKING HERE.
.
Source: The Atlantic

Previous post:
Hold Onto Your Helmets & Get Ready To Dance Your Ass Off: DAFT PUNK To Release New Material In 2013 Next Post:
The Greatest Grid: The Truly Remarkable Story Of How Manhattan Got Its Legendary Grid System