National Geographic broke the news last Friday about an incredible new discovery in Guatemala:  “Some 1,600 years ago, the Temple of the Night Sun was a blood-red beacon visible for miles and adorned with giant masks of the Maya sun god as a shark, blood drinker, and jaguar.  Long since lost to the Guatemalan jungle, the temple is finally showing its faces to archaeologists, and revealing new clues about the rivalrous kingdoms of the Maya.”  The Mayans — unlike the more centralized Aztec and Inca empires — was a loose aggregation of city-states (now present day Guatemala, Belize, and Mexico’s Yucatán region: SEE MAP).  Some of these city-states were hell bent on standing out and making a fierce impression, which is exactly what the kingdom of El Zotz (now Guatemala) achieved in its heyday.

By 2010 archaeologists working on a hilltop near the ancient city centre had discovered the 45-foot-tall Diablo Pyramid, and on top of that they found a royal palace and tomb, which experts believed held the city’s first ruler who lived around (A.D. 350-400).  Around this time, archaeologists discovered the first hints of the Temple of the Night Sun, just behind the Diablo Pyramid.  Only recently, however, have they been able to uncover the unprecedented artworks buried under centuries of thick overgrowth.  The building is incredibly unique because the sculptures are so dramatic and protrude so far out of the structure (the Mayans regarded this monument as a living being).  Usually in these cases, the sculptures would have all fallen off by now, but not here.

Evidence at the site suggests the building was abandoned sometime in the fifth century, for reasons unknown.  Brown University archaeologist Stephen Houston tells National Geographic, “It’s like they just dropped their tools and left” in the middle of once again expanding the temple, Houston said. “I think what you’re looking at is the death of a dynasty.”  These and more answers will likely become evident as more of the Temple of the Night Sun is unearthed.  Only 30% of the temple has been excavated so far.  To read the full story, including the significance of the giant faces that cover the monument (one of thse faces is The Maya sun god portrayed as half shark / half man) be sure to visit NationalGeographic.com. 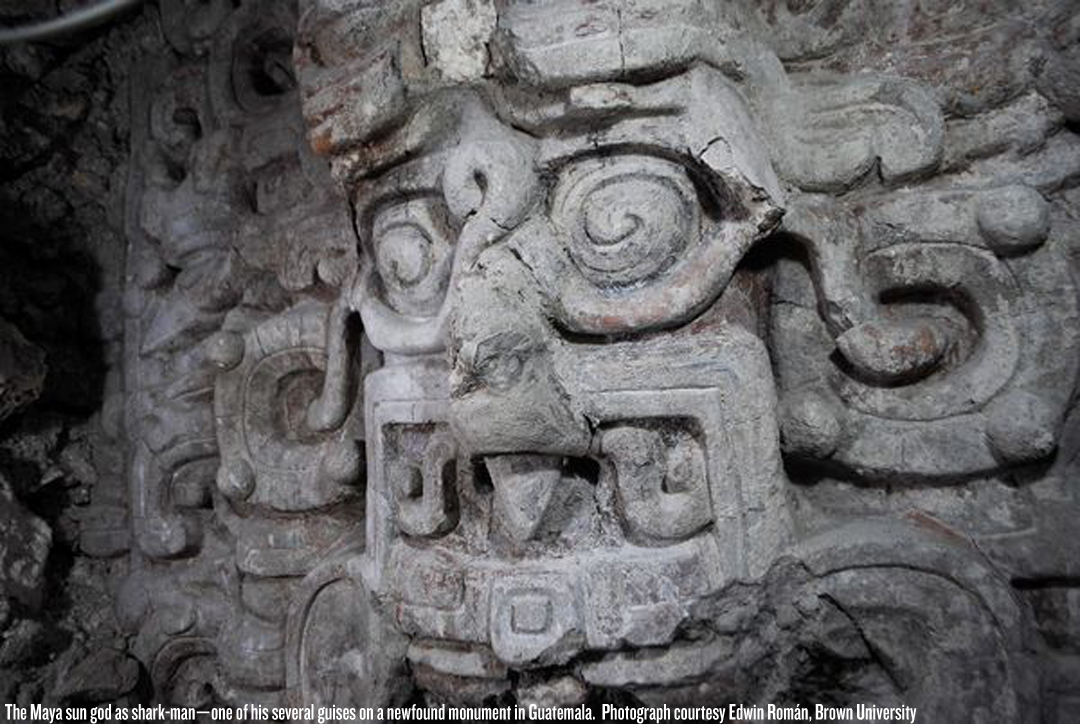