I’ve been a die hard news whore ever since I was a little boy. And part of the reason I enjoy FEELguiding so much is that it makes me feel more connected to the world of broadcast journalism.  From Charlie Rose, to the TODAY show, to 60 Minutes, to NBC Nighly News, to This Week, to ABC NEWS, and to CBS NEWS — I have made it clear to my readers over the past couple years that news is one of my biggest passions.

When it comes to news and media, the mother ship is and always will be New York City.  I’m not exaggerating in the slightest when I tell you I’ve had fantasies of showing up for work every day at any one of these legacy newsrooms.  And until the day when that dream comes true, a VIP tour will do just nicely.  ABC NEWS‘ resident hottie World News anchor David Muir — one of my Future Husbands — recently gave viewers a taste of what it’s like to call ABC NEWS headquarters your home.  Watch below as David takes us deep inside the bowels of ABC NEWS at 47W 66th Street in NYC, including the newsroom, the control room for all of ABC’s programming, the studio itself, a pop-in visit to Diane Sawyer‘s 2pm meeting where she and her team were building the evening’s newscast, as well as a quick peek inside Diane’s office which is filled with so many awards they’re falling off the table tops.

Thanks for the tour David!  And I look forward to someday picking up where this tour left off — perhaps with a romantic dinner overlooking the Manhattan skyline, followed by a midnight yacht cruise around the island where we eventually make our way to the boat’s private rooftop with our chilled champagne and puffy white bed where we will make our own very “special” kind of newscast.  I’ll take the top stories and you can handle the bottom ones.  Or vice versa.  Either way will be magical.  For all things David Muir be sure to follow him on Twitter and Facebook, and watch him anchor World News on Saturday and Sunday nights at 6pm. 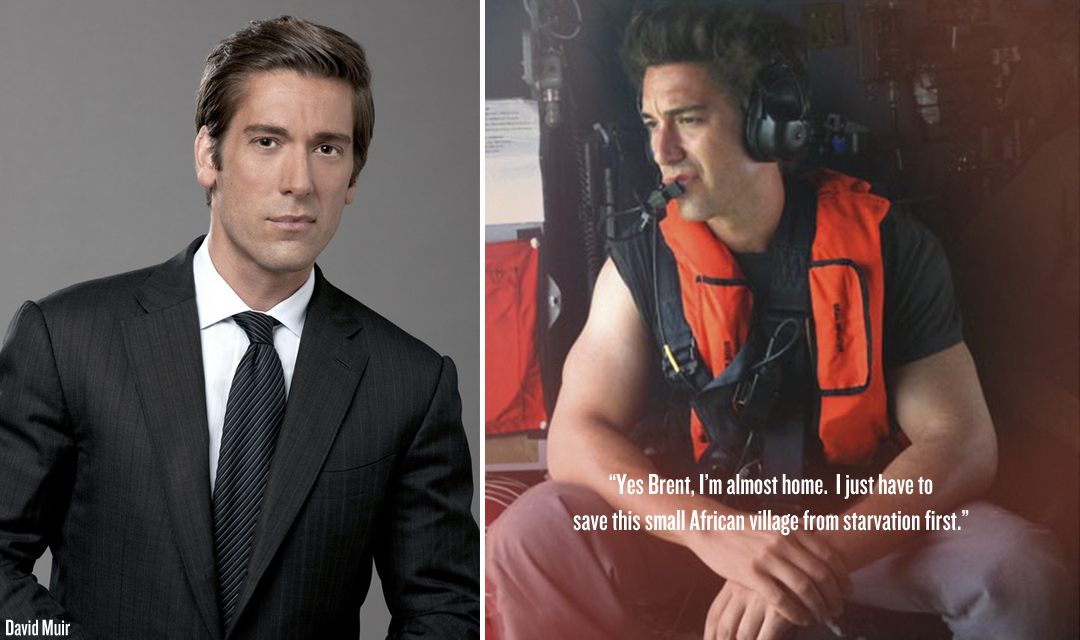 Previous post:
European Police On The Hunt For OJ The Dentist: The Man Who Just Stole Brahms’ & Strauss’ Teeth Next Post:
Aarnio’s Dreamy “Cloud Chamber Under The Mountain” Mixtape Is Customized For Gin & Stargazing