When director Joseph Kasinski‘s TRON: Legacy hit theatres in December 2010, it secured his place near the very top of film’s most exciting new directors.  An alumnus of the Columbia Graduate School of Architecture, Planning and Preservation, Kasinski is also serves as an adjunct assistant professor at the prestigious university.  His passion for pushing the limits of computer-generated space and the philosophical implications this precipitates, is matched by his love of storytelling.  This combination not only produced mindblowing results in TRON, it also led Kasinski to begin writing his graphic novel entitled Oblivion back in 2005 when he first moved to Los Angeles.  In August 2010, Disney bought the rights to the work, and it’s now well on its way to becoming a feature film starring Tom Cruise and Academy Award-winner Melissa Leo (The Fighter).  The following is the synopsis of Oblivion:

Tom Cruise stars in ‘Oblivion’, an original and groundbreaking cinematic event from the director of ‘TRON: Legacy’ and the producer of ‘Rise of the Planet of the Apes’. On a spectacular future Earth that has evolved beyond recognition, one man’s confrontation with the past will lead him on a journey of redemption and discovery as he battles to save mankind.  Jack Harper (Cruise) is one of the last few drone repairmen stationed on Earth. Part of a massive operation to extract vital resources after decades of war with a terrifying threat known as the Scavs, Jack’s mission is nearly complete.  Living and patrolling the breathtaking skies from thousands of feet above, his soaring existence is brought crashing down when he rescues a beautiful stranger from a downed spacecraft. Her arrival triggers a chain of events that forces him to question everything he knows and puts the fate of humanity in his hands.

And the amazingness doesn’t stop there.  Yesterday, The Playlist reported that French electronic music group M83 are busy working on the film’s score.  In an exclusive interview with The Playlist, M83 frontman Anthony Gonzalez revealed his excitement about the project: “I’ve wanted to do soundtracks for so long, and starting with such an ambitious project, especially in the sci-fi category, means a lot to me.  I’m not afraid to do my first soundtrack on a big Hollywood movie, with a big budget and a lot of pressure … I like challenges and it excites me more than frightens me. I can’t wait to hear my music played by amazing musicians, and an orchestra and brass and maybe choirs. It’s a chance to create something big and I’m ready for it.”  You can read the full interview by visiting The Playlist.  Oblivion is scheduled to arrive in theatres on April 26, 2013.  To learn more about Joseph Kasinski be sure to visit his website at JosephKosinski.com.  And to enter the world of M83 you can visit ILOVEM83.com, and follow them on Facebook, Twitter, Soundcloud, and YouTube.  To purchase your own copy of Kasinski’s Oblivion graphic novel simply head over to Amazon. 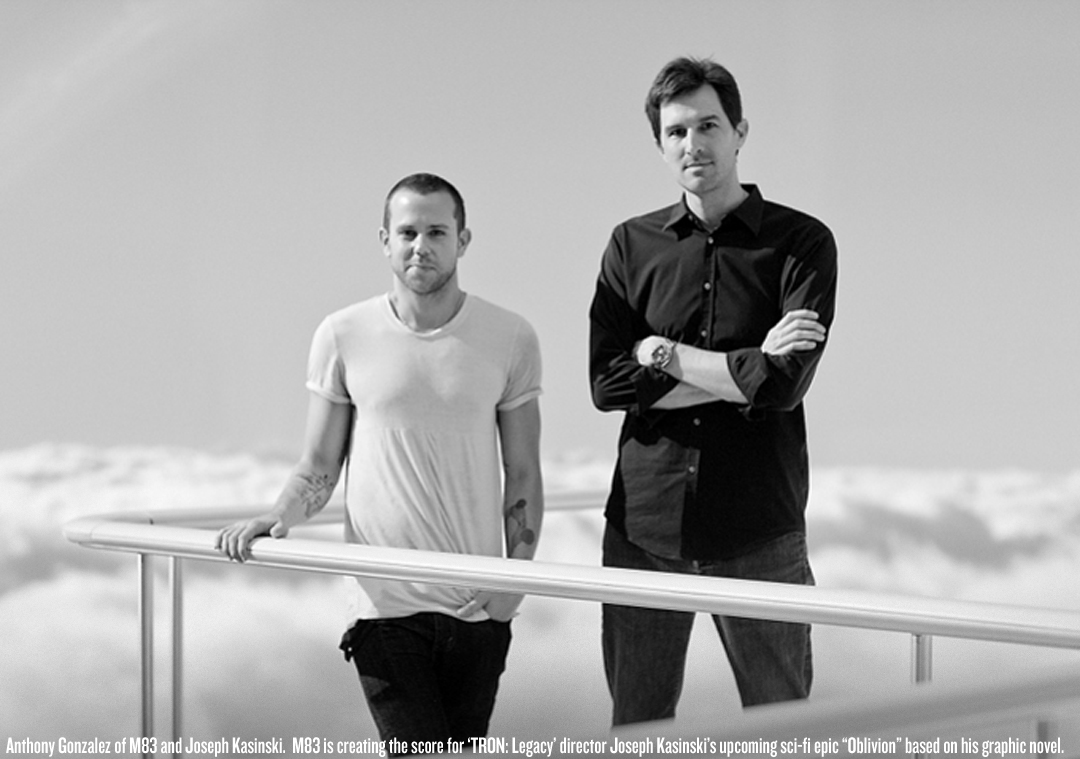