Physics is the great grandfather of all sciences, which is reflected in the amount of money that international governments accord it.  For example, the epic Large Hadron Collider (LHC) particle smasher which is cranking out awesome results as you read these words, came in with a price tag of $9 billion.  As well as the International Thermonuclear Experimental Reactor (ITER), an international collaboration to build the world’s largest fusion reactor (read more about that at Popular Science), which will cost $12.8 billion.  But occasionally, other fields get some big slices of tax payer pie as well, and this week astronomy got one of those mega slices.

For years now, various countries have been competing to be the host nation(s) for the Square Kilometre Array (SKA), a gigantic $1.9 billion telescope first proposed in 1991 and designed to be the most sensitive ever built in history.  We already have some huge telescopes out there, such as the 305m-wide Arecibo Telescope carved into a Puerto Rican hillside, and the 100m Robert C. Byrd Green Bank Telescope in West Virginia (unlike Arecibo, the Byrd dish can actually move).  But as huge as these two are, they’re still insufficient with regards to the motherload questions that astronomers dream of.  The Economist explains why:

The resolving power of a telescope is determined by the ratio of its size to the wavelength of the radiation it is collecting. A typical optical telescope has a diameter a few million times the wavelength of visible light. Applying that sort of ratio to the SKA, which is designed to work with wavelengths measured in metres, would require a dish thousands of kilometres across.  Building such a dish is obviously impossible. But what is possible is to build many smaller dishes spaced a long way from one another, and to link them with clever computer algorithms so that they behave as if they were a single giant telescope. This is called interferometry, and is not a new idea. Many of the world’s radio telescopes are linked in this way, providing far better resolution than any of them could alone. And several countries have already built collections of small, cheap dishes and networked them into more powerful “virtual” instruments.  What makes the SKA special is its sheer scale. The design calls for around 3,000 individual receivers arranged rather like a spiral galaxy, with most of the telescopes concentrated in an inner core, and the rest arranged into a set of arms up to 3,000km (about 2,000 miles) long. Fibre-optic cables will link each of these dishes to a central processing area, where supercomputers will stitch their data together. When it is fully up and running (by 2024, assuming no big delays), the SKA will be more than 50 times more sensitive than any other radio telescope, and able to survey the sky thousands of times faster.

As The Economist wrote yesterday that the SKA committee reached their final decision.  The 3-part telescope is so huge it will be built in separate countries around the world: the low-frequency antennae will be built in Australia and New Zealand, and the medium- and high-types are going to be built in Africa.  The decision process took several things into account, from the political stability of the respective countries, to the geography and topography of the sites, to the accessibility to electricity (the SKA will use about 110 megawatts when up and running, so power bills will be a significant expense).  You can read the entire fascinating story by visiting TheEconomist.com.

As soon as it is activated, the SKA will begin to unlock the biggest outstanding questions in astronomy.  It will start by hunting down gravitational waves — the ripples in the structure of space as predicted by Albert Einstein’s General Theory Of Relativity.  It will unlock the secrets of the mysterious magnetic field that exists between the stars.  It will have the capability of literally seeing back in time — namely the 400,000 to 800 million years immediately after the Big Bang, when things started cooling off and forming the first giant objects to form, such as galaxies and clusters of galaxies.  And as far as our search for extrasolar planets is concerned, imagine what it would be like to be stuck in a pitch black cave with no guiding light and having someone hand you a kick ass billion dollar flash light.  Pure amazingness. 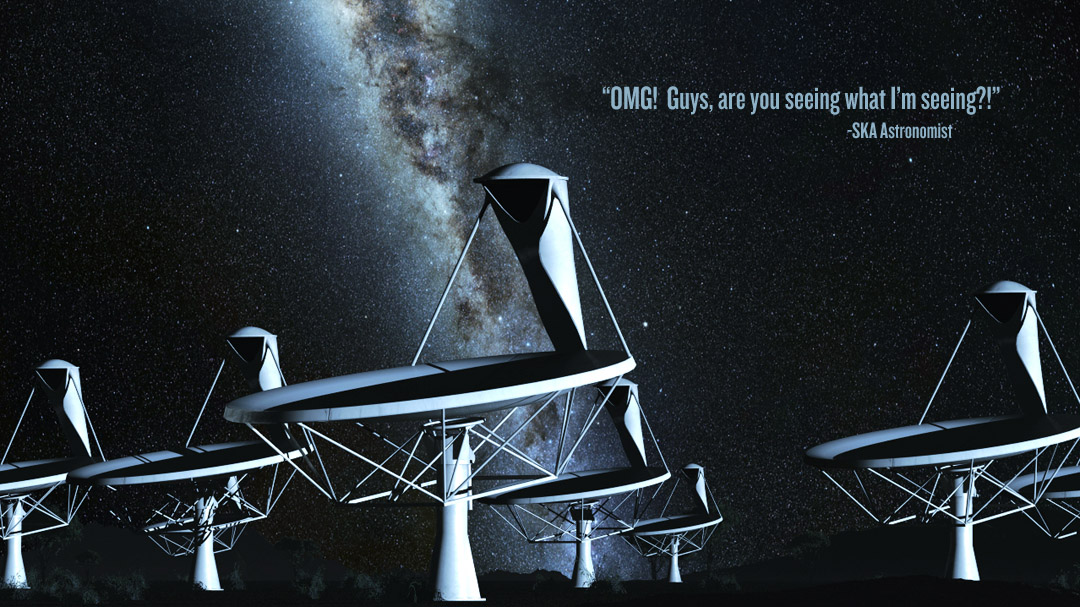