Last Wednesday, Dr. Margaret Chan, Director General of the World Health Organization gave her keynote address at a Copenhagen conference on combating antimicrobial resistance, and Chan’s words were so bone-chilling, they went around the world almost instantly.  As bacteria evolve to evade antibiotics, Chan warns, common infections could become deadly: “We are losing our first-line antimicrobials.  Replacement treatments are more costly, more toxic, need much longer durations of treatment, and may require treatment in intensive care units.”  Chan said hospitals have become “hotbeds for highly-resistant pathogens” like methicillin-resistant Staphylococcus aureus, “increasing the risk that hospitalization kills instead of cures.”  Diseases that were once curable, such as tuberculosis, are becoming incredibly difficult — and incredibly expensive — to treat.  “[Treatment now] typically requiring two years of medication with toxic and expensive medicines, some of which are in constant short supply,” Chan says.  “Even with the best of care, only slightly more than 50 percent of these patients will be cured.”  Antibiotic-resistant strains of salmonella, E. coli, and gonorrhea have also been discovered.

“Some experts say we are moving back to the pre-antibiotic era
No. This will be a post-antibiotic era. In terms of new replacement antibiotics,
the pipeline is virtually dry,” said Chan. “A post-antibiotic era means, in effect,
an end to modern medicine as we know it. Things as common as strep throat or
a child’s scratched knee could once again kill.”

The scarcity of effective antibiotics could also make surgical procedures and certain cancer treatments risky or even impossible, Chan said.  “Some sophisticated interventions, like hip replacements, organ transplants, cancer chemotherapy and care of preterm infants, would become far more difficult or even too dangerous to undertake,” she said.  The development of new antibiotics now could help stave off catastrophe later. But few drug makers are willing to invest in drugs designed for short term use.  “It’s simply not profitable for them,” said Dr. William Schaffner, chairman of preventive medicine at Vanderbilt University Medical Center in Nashville. “If you create a new drug to reduce cholesterol, people will be taking that drug every day for the rest of their lives. But you only take antibiotics for a week or maybe 10 days.  While we try to encourage the pharmaceutical industry to create new antibiotics, we have to be very prudent in their use,” he said.

But there are ways to limit the potential for bacteria to develop antibiotic resistance: Use antibiotics appropriately and only when needed; follow treatment correctly; and restrict the use of antibiotics in food production to therapeutic purposes.  “At a time of multiple calamities in the world, we cannot allow the loss of essential antimicrobials, essential cures for many millions of people, to become the next global crisis,” said Chan. 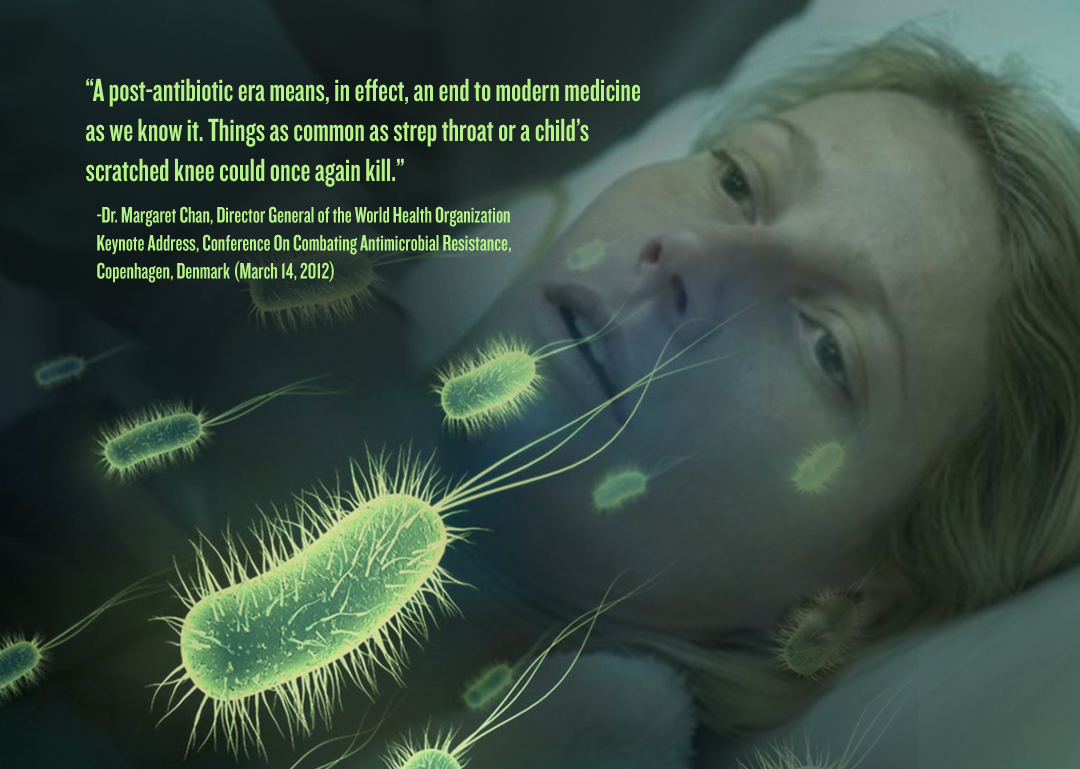 Previous post:
Interview Magazine Sits Down With Ambient Electro-Trio HOUSE OF BLONDES For Some “Clean Cuts” Next Post:
The Crazy Story Of Haydn’s Robbed Grave & Stolen Skull Which Was Eventually Returned (Kind Of)