Yesterday I was getting my daily morning dose of classical music from the amazingness that is Julie Nesrallah and her show Tempo on CBC Radio2, and she told an insane story about iconic Austrian composer Joseph Haydn (1732-1809).  When Haydn passed away on May 31, 1809 at the age of 77, Austria was at war and the capital of Vienna was occupied by Napoleon‘s troops.  Because of the war, a quick and simple funeral was held for Haydn in the suburbs of Vienna where Haydn had lived, followed by burial in the Hundsturm cemetery.  Following the burial, two men bribed a cemetery worker and severed and stole the dead composer’s head.  The two numbskulls were Joseph Carl Rosenbaum, a former secretary of Prince Nikolaus Esterházy II (the Prince of Austria who happened to be a very close friend of Haydn’s, as well as Haydn’s number one fan and main employer) and Johann Nepomuk Peter, a manager of one of Vienna’s biggest prisons.  Rosenbaum and Haydn were also good friends as well — it was Haydn himself who intervened with the Esterházys which made possible Rosenbaum’s marriage to the soprano Therese Gassmann.

So why did Peter and Rosenbaum steal Haydn’s skull?  Their motivation was an interest in phrenology (a now-discredited scientific movement) that attempted to associate mental capacities with aspects of cranial anatomy. Of particular interest to phrenologists was the anatomy of individuals held to have exhibited great genius during their lifetime (sixteen years later, a similar attempt was made on the body of Ludwig van Beethoven for the same reason).  The process of stealing the head was, apparently, not pleasant, since decomposition had set in and the smell was intense.  However, Peter and Rosenbaum succeeded in cleaning the skull and duly carried out their phrenological examination. Peter declared that “the bump of music” in Haydn’s skull was indeed “fully developed”.  Afterward, Peter kept it in a handsome custom-made black wooden box, with a symbolic golden lyre at the top, glass windows, and a white cushion.

In 1820, Haydn’s old patron Prince Nikolaus Esterházy II was inadvertently reminded by the chance remark of an acquaintance that he had forgotten to carry through his plan of having Haydn’s remains transferred from the Vienna suburbs to the family seat in Eisenstadt.  When the remains were exhumed, the Prince was shocked to find that they included no skull, and quickly put two-and-two together, realizing that Peter and Rosenbaum were responsible.  Peter and Rosenbaum, however, were always two steps ahead of the police, and managed to maintain possession of the skull.  With both men’s houses due to be searched, Peter gave the skull to Rosenbaum, who hid it in a straw mattress.  During the search of Rosenbaum’s house, his wife Therese lay on the bed and claimed to be menstruating, so the police respected Mrs. Rosenbaum’s privacy and didn’t go near the mattress.  Eventually Rosenbaum gave Prince Esterházy a different skull.

On his death Rosenbaum willed the skull to Peter, under the condition that on his own death Peter would will the skull to the Gesellschaft der Musikfreunde (Society of the Friends of Music) in Vienna, where it did indeed pass in 1895. The musicologist Karl Geiringer, who worked at the Society before the advent of Hitler, would on occasion proudly bring out the relic and show it to visitors.  In 1932, Prince Paul Esterházy, Nikolaus’s descendant, built a marble tomb for Haydn in the Bergkirche in Eisenstadt.  This was a suitable location, since it is where some of the masses Haydn wrote for the Esterházy family were premiered.  The Prince’s express purpose was to unify the composer’s remains.  However, there were many further delays, and it was only in 1954 that the skull was finally transferred from the Gesellschaft der Musikfreunde to this tomb, thus completing the 145-year-long burial process.  When the composer’s skull was finally restored to the remainder of his skeleton, the substitute skull was not removed. Thus Haydn’s tomb now contains two skulls.

For more amazingness from the world of classical music be sure to visit JulieNesrallah.com, and listen to Tempo each weekday morning from 9:00am – 1:00pm EST by CLICKING HERE, and be sure to also follow Tempo on Twitter. 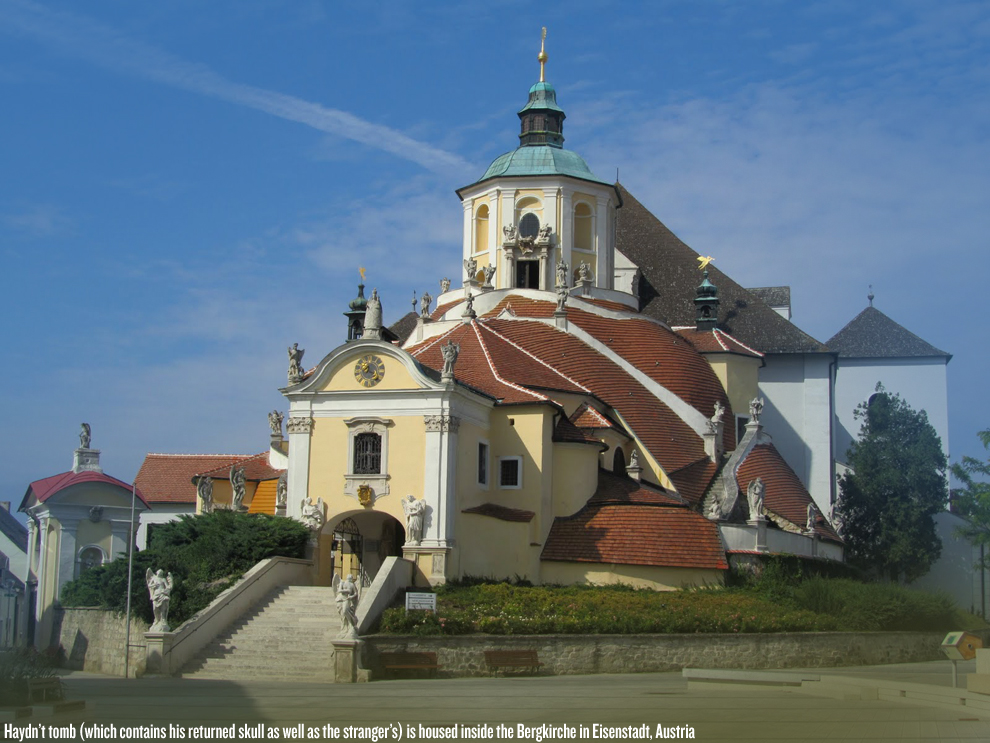