When I was around 13-years-old I first discovered Entertainment Tonight.  Within 30 minutes I was instantly hooked, and for the next several years I watched the show religiously.  And I mean that in every possible way.  Hollywood was my obsession as a young kid growing up deep in the Ottawa Valley (Canada’s siamese cultural twin to Tennessee) where lumberjacks, chain saws, giant trucks, deer hunting, and 24-hour country music on every single radio were de rigueur.  Being gay and growing up surrounded by this suffocating sea of hillbillyus testosteronicus, it was no wonder I fell in love with a show that provided me with a daily 30-minute glimpse of a world that was infinitely more fascinating than my own surroundings.  In many ways I felt like a miner trapped deep inside a cave desperately sipping the life-giving water that would miraculously arrive like clockwork each weeknight at 7pm.  ET was very much an incubator for my very first Hollywood dreams as a young kid, and I will even go as far as to say this show is directly responsible for sending my career on a trajectory towards the entertainment industry which has provided me with so many incredible memories, friends, stories and experiences over the past decade.

I kicked off my childhood love affair with ET right around the same time as I kicked off my eight and final year in elementary school, and a few months into my daily ET routine I developed a fascination for the most important figure behind the show that became such an influence in my life — none other than ET’s longtime Executive Producer Linda Bell Blue.  I can even remember writing to Ms. Blue personally to let her know about how much ET would benefit from having one lucky viewer attend the 1988 Grammy Awards alongside the ET crew, and who better to fill this position than yours truly?  I never heard from Linda, so I kicked off a one-year boycott of the show in protest.  This boycott, however, only lasted a week.  I quite simply could not do without my dream machine.  Fast forward to 2012 and Linda Bell Blue is still running the Entertainment Tonight empire, and has singlehandedly invented and evolved the art of entertainment journalism.  The show is now seen in nearly ever corner of the developed world, from India to the Philippines, from Brazil to New Zealand.  For nearly 30 years, the face and voice of the show was Mary Hart, and on Friday, May 23rd, 2011, Linda stood just off camera as her longtime friend and colleague bid adieu to the anchor’s seat.  And three short days later, that baton was passed to Nancy O’Dell, the next in line for the ET throne.  So how exactly did Nancy snag the most coveted job in broadcast entertainment journalism?  The Hollywood Reporter was there behind the scenes for the incredibly smooth transition, and published a feature story about Linda, the evolution and future of ET, and the incredible string of serendipitous events that led up to O’Dell getting the anchor position.  The following is an excerpt from that story.

First published in The Hollywood Reporter (June 4, 2011) by Stephen Galloway ☛  If Entertainment Tonight‘s Executive Producer seems even more possessed of nervous energy than usual, there’s a reason: This is the first day in 29 years that her show will welcome a new woman to the anchor desk: Nancy O’Dell, the former Access Hollywood co-host who is replacing veteran Mary Hart.  It’s 9:30am on Monday, May 23, less than 72 hours since ET bid Hart farewell at a champagne-soaked party. Now the staff isn’t just recovering from the celebration, it’s also coming to terms with adding an outsider to the mix of this CBS syndication jewel.  “It’s the biggest challenge I’ve faced on the job,” Bell Blue admits. “Finding the right person was everything.” Seconds later, she and the “right person” are hugging warmly in O’Dell’s dressing room. They’re a study in contrasts — one a human tornado, the other a picture of Southern charm, immaculate in a bright red dress that Bell Blue has personally approved for her debut today. 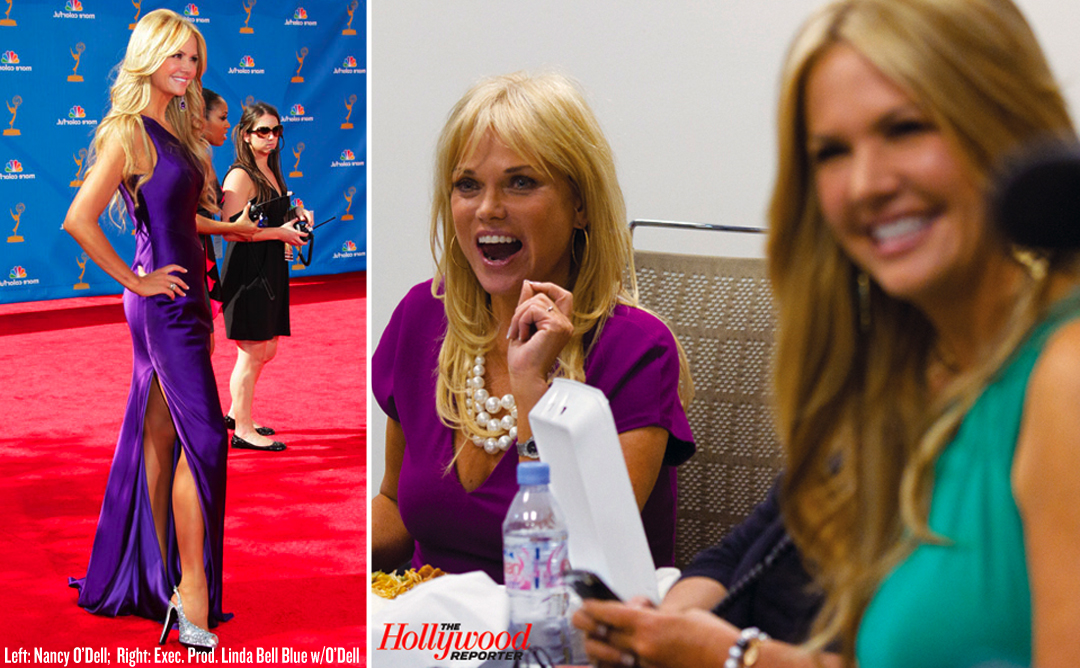 “You’re gonna be great, hon,” the producer says. “You’re gonna do just fine.” Then Jamie Foxx sweeps in for a “surprise” visit and soon they’re all racing toward ET‘s studio, where O’Dell clambers onto a revolving stage, takes her place beside fellow anchor Mark Steines and, as light and bright as a souffle, scans through the day’s top stories — from the Dancing With the Stars finale to Arnold Schwarzenegger’s “love-child.” Two hours later, it’s over, virtually without a flub. “One thing’s for sure,” O’Dell beams as a stage manager helps her down — no easy feat in six-inch heels — “I’m always going to remember Arnold.”

… At a time when television has been rocked by some of the highest-level departures in history — from Katie Couric at CBS Evening News to Simon Cowell at American Idol to Oprah at The Oprah Winfrey Show — it’s been easy to overlook another with almost equal significance to CBS: Hart at ET.

[At 60-years-old, Mary Hart] had already cut back her hours over the past year
allowing the show to reduce her salary from $6 million to approximately half that,
when she formally announced in August 2010 that she would not return for a 30th season.
Finding a substitute would impact ET‘s annual $100 million-plus in profits,
according to sources, still immense in the midst of a declining
syndication business that has led to some layoffs and cutbacks,
reducing ET‘s total budget from around $40 million to $35 million
per year. “The money’s not there anymore,” an executive notes of syndication.
“CBS doesn’t have Oprah as a bargaining chip, and stations don’t want to pay as much.
They say, ‘I know you’re throwing [ET spinoff] ‘The Insider’ in, but
you’ve got to drop your price.’ That’s where the problem lies.”

To address this, Bell Blue created a shortlist of five names as potential replacements. But when she heard O’Dell was available — a candidate embraced not only by her, but also by CBS Television Distribution president John Nogawski and the division’s then-head of creative affairs and development, Terry Wood — everything changed. In 2009, the presenter had left Access of her own volition after 13 years on the show. “It just didn’t feel like the right fit anymore,” is all she’ll say. While still technically under contract to NBC, that was about to expire, and she would be free to join ET. Following an initial meeting with Wood and Bell Blue, a second get-together took place Oct. 7 among Bell Blue, O’Dell and Nogawski. The three searched for a place where they could confer in secret, finally settling on Nogawski’s country club. Almost immediately,  they bonded. “I said, ‘I remember watching ‘Entertainment Tonight’ from my home in South Carolina as a teenager and thinking, I’d love to work for that show!'” O’Dell recalls. “And John made a comment, ‘Boy you’re going to have your dreams come true!'”

After a brief period of radio silence while Bell Blue was abroad, O’Dell got a call offering her the job. Within weeks, her agent had wrapped negotiations guaranteeing his client some $2 million per year, and on Nov. 8, ET made the signing public. 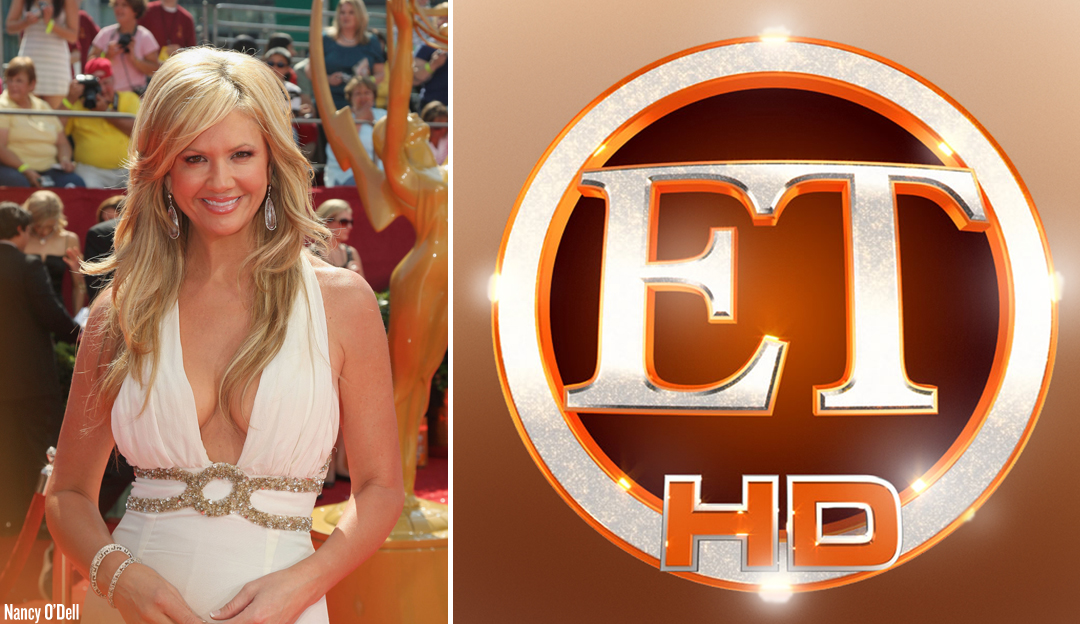 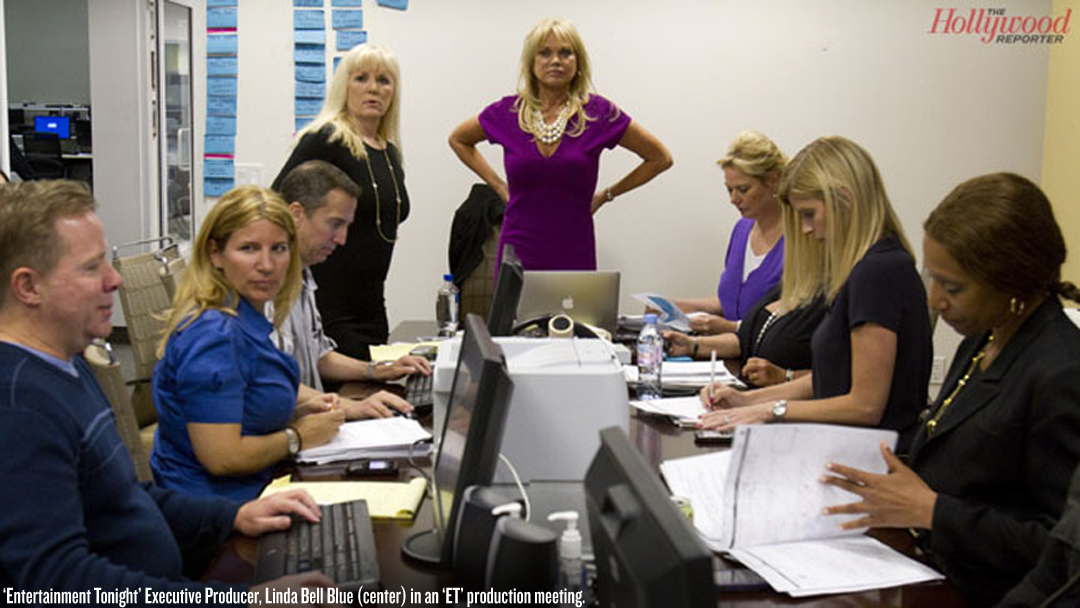 … “ET’s success is simple,” says one of the show’s most admired newshounds, Bonnie Tiegel. “It’s Linda Bell Blue, Linda Bell Blue, Linda Bell Blue.” O’Dell shares her enthusiasm. “I remember I left [our first meeting] and called my husband saying, ‘I love this lady!'” she says. “You click or you don’t click, and we just clicked.” It’s Thursday morning, right after the last day of sweeps, and O’Dell sits back in her vast, empty office as her week draws to a close, relieved that everything else has clicked, too. She laughs at the office’s Spartan décor. “I’ve been working so hard, I haven’t even had time to furnish it!” she says.

It would be a mistake to think O’Dell is simply a glorified newsreader. She’s constantly out at premieres, interviewing celebrities, doing marathon “radio tours” to promote the show and texting sources for information. After stumbling into journalism, following a start in TV sales, she did everything from covering local news to pretending she was a prostitute, walking the streets with a black wig while taking part in an on-air police bust — twice. Today, she’s been up since 5am. She hopes to be done by mid-afternoon, but is prepared to handle breaking news — like yesterday, when word spread as the show wrapped that Schwarzenegger might be indicted by California’s attorney general.

Even at home, she has a dedicated high-speed line for quick voiceover updates. “One of the first things they did was build that,” she notes. At the same time, she’s juggling a marriage to Conviva Networks exec Keith Zubchevich, two stepsons and a 3-year-old daughter — all with an unbridled enthusiasm that makes one think nothing can possibly have gone wrong in her life. Which is, of course, ridiculous.

Dissatisfied during her last years at Access, she was there when she learned her mother was terminally ill. “It was the most traumatic thing I have ever gone through in my life,” she says. “She lost her voice for about a year and we couldn’t figure out why. She was hoarse, then got a whisper, then her voice completely went away. A year later, she was diagnosed with ALS” — Lou Gehrig’s disease. Eight months after that, in 2008 she died. Her death may have impacted O’Dell’s decision to leave Access before her contract was up, plunging her into the unknown. “I was a little scared,” she confesses. “I wondered if other things would come.” They did — first a series of freelance gigs, then ET. “I didn’t have any idea Mary would announce this was going to be her final season,” she marvels. “Had that not happened [exiting ‘Access’], I’d never have been available.”

With only a few hours’ work ahead tomorrow before her initial week ends, the future looks good. These first four days, ET‘s ratings have been up 8% over a year ago, according to a CBS spokesman. In some major markets, they’ve been even better — like New York, up 27% over the previous Monday-Thursday. The Schwarzenegger maelstrom has helped; so have all those staffers toiling behind the scenes. But O’Dell has been crucial. “I’m very happy,” she admits modestly. Then her eyes glint, and some of Bell Blue’s drive seeps out. “But we’ve still got the next sweeps ahead.”

You can read the entire feature by visiting The Hollywood Reporter.  Entertainment Tonight premiered on September 14th, 1981 as the very first entertainment news program, and was also the very first syndicated program in the world distributed via satellite.  For decades, ET has consistently held an unprecedented top ten position in the ratings race between syndicated television programs, and generates a whopping $100 million per year in net profit.  It is produced and distributed by CBS Television Distribution, and is taped on Stage 4 at the CBS Studio Center in Los Angeles.  For all things Entertainment Tonight be sure to visit ETonline.com, follow the show on Facebook and Twitter, download the show’s iPhone app by CLICKING HERE, follow Linda Bell Blue on Twitter, and visit Nancy’s site at NancyOdell.com.  For more great stories such as this be sure to visit The Hollywood Reporter at HollywoodReporter.com, and follow THR on Facebook and Twitter.  To learn how you can support Betty’s Battle, the charity Nancy created in order to find a cure for ALS (Lou Gehrig’s disease), and founded in honor of her mother who lost her own battle with the disease in June 2008, be sure to visit BettysBattle.org.  The more you spread the word, the more lives you will help save.