For anyone who loved The Tree Of Life as much as I did, one of the most achingly beautiful moments came when François Couperin‘s exquisite 1716 composition “Les Barricades Mystérieuses” accompanied the heavenly images of the film’s characters moving softly through love, grace, and Mother Nature herself.  The music struck me instantly and at that moment I had no idea what I was listening to, and had made the assumption that the piece was an original composition for the film’s score.  Boy, was I wrong.  “Les Barricades Mystérieuses” is, in fact, a kaleidescopic musical trompe l’oeil masterpiece created by Couperin as part of his Sixiéme Ordre of Couperin’s Pièces Pour Clavecin, published in 1716–17.  The Guardian has a wonderful summary of this incredible piece of music that has fascinated and enthralled countless people throughout the centuries, and in his feature article, Guardian’s Tom Service first tries to find out Couperin’s source of inspiration for the mysterious title (The Mysterious Barricades).  Although the answer may never be known, Service nails down the top three possibilities that have risen to the top through the years: masks, Freemasonry, or theories of harmony of melody (NOTE: The title is also the source for ex-Police guitarist Andy Summers’s 2009 album.)

None of that speculation would mean anything, though, if the music of these mysterious barricades weren’t so interesting. The four parts create an ever-changing tapestry of melody and harmony, interacting and overlapping with different rhythmic schemes and melodies. The effect is shimmering, kaleidoscopic and seductive, a sonic trompe l’oeil that seem to have presaged images of fractal mathematics, centuries before they existed.  In Frankfurt earlier this week, Thomas Adès described Les Barricades as a better composition lesson than any he’d received from his teachers, an object lesson in how to generate melody from harmony and vice versa. His arrangement of the piece makes Couperin both clearer and more mysterious, in a scoring for double bass, bass clarinet, clarinet, viola and cello. Adès’s performance at the harpsichord, part of a concert with Ensemble Modern, was itself a sort of arrangement, teasing out the most daring implications of the music. On YouTube, Blandine Verlet comes closest to making the music sound as if it’s being composed in the moment – and I guarantee, it will haunt you for days.

Knol also takes a fascinating look at this musical gem that is as small as it is powerful, writing: “‘The Mysterious Barricades’ makes extensive use of syncopation in the right hand, and it has been suggested the ‘barricades’ in the title might refer to notes that are tied across measure lines.  Otherwise there is no definitive information for the origin of the title.  ‘The Mysterious Barricades’ is in the musical form known as ‘rondo’ as shown below, where the letter A refers to the main theme and the letters B through D refer to variations on the main theme.  After each variation there is a return to the main theme:

“In this particular rondo the main theme is repeated twice at the beginning, and twice at the end.  A tempo that completes the piece in about two and a half minutes is typical for modern day performances.  (The last repeat of the main theme is often omitted nowadays.)  The original key of the harpsichord music is Bb with both staves labeled with a bass clef.  Unlike the piano, a harpsichord can play a fast melody in the lower registers with brilliance and clarity.  The same notes on a piano would sound muddy and blurred.  Because of the similarity of sounds of the harpsichord and guitar, and ease of arrangement for guitar, ‘The Mysterious Barricades’ is a favorite of classical guitarists.”  You can read more about this classical treasure by CLICKING HERE. 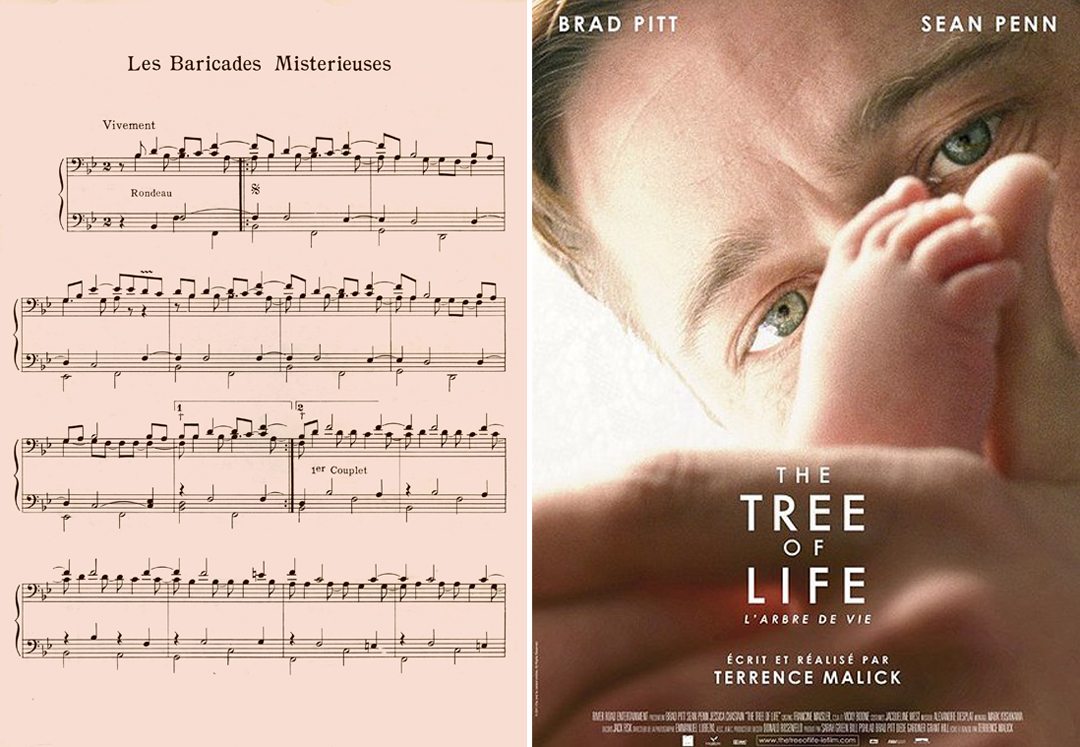