FEELguide And FOCUS Features Present The “Being Flynn” FEELprize Contest

Can one life story have two authors?  That is the premise behind Being Flynn, the new dramatic feature from Academy Award-nominated writer/director Paul Weitz (About a Boy).  Adapted from Nick Flynn’s 2004 memoir Another Bull$@#t Night in Suck City, the movie explores bonds both unbreakable and fragile between parent and child.  Nick Flynn (portrayed in the film by Paul Dano of Little Miss Sunshine and There Will Be Blood) is a young writer seeking to define himself.  He misses his late mother, Jody (four-time Academy Award nominee Julianne Moore), and her loving nature.  But his father, Jonathan, is not even a memory, as Nick has not seen the man in 18 years.

Jonathan Flynn (two-time Academy Award winner Robert De Niro) has long defined himself as a great writer, “a master storyteller.” After abandoning his wife and child, Jonathan scrapes through life on his own terms, and ends up serving time in prison for cashing forged checks. After prison, he drives a cab for a number of years, but with his drinking and eccentricities now accelerating, he loses his job. Despite the occasional grandiose letter to his son, he has remained absent from Nick’s life.  Suddenly facing eviction from his apartment, Jonathan impulsively reaches out to Nick and the two come face-to-face. The older man is eloquent and formidable; overwhelmed, Nick nonetheless prepares to integrate his father into his own life. But, as quickly as he materialized, Jonathan flits away again.  Moving on, Nick takes a job at a homeless shelter, where he learns from Captain (Wes Studi) and Joy (Lili Taylor) how to relate to the guests who arrive night after night. Seeing the homeless – some permanently, some temporarily so – and hearing their stories, Nick finds purpose in his own life and work. He also sustains a romance with a co-worker, Denise (Olivia Thirlby). Then one night, Jonathan arrives, seeking a bed, and Nick’s senses of self and compassion falter. To give the two of them a shot at a real future, Nick will have to decide whom to seek redemption for first.

Evocatively told, ruefully funny, and moving in its depiction of the ties that bind, Being Flynn tells a story that reveals universal truths.  The film opens this coming Friday March 16th across North America, and in association with FOCUS Features we present the Being Flynn FEELprize Contest.  One lucky winner will receive a $25 Fandango gift card, the official motion picture soundtrack featuring 15 original songs by Badly Drawn Boy, as well as the exclusive Being Flynn book.

TO WIN SIMPLY POST ON OUR FACEBOOK WALL THE ONE ACTOR WHO WOULD PLAY YOUR FATHER IN THE MOVIE ABOUT YOUR LIFE (OR CAST YOUR MOTHER’S ROLE INSTEAD IF YOU LIKE).  IT’S THAT EASY.  YOU CAN EVEN POST A PIC IF YOU LIKE AS WELL.  TO POST ON OUR FACEBOOK WALL CLICK HERE.  IF TWITTER’S YOUR PREFERRED NETWORK YOU CAN TWEET US INSTEAD BY CLICKING HERE.  THE WINNER WILL BE CHOSEN RANDOMLY (NOTE: IF YOU SEND AN FB POST AS WELL AS A TWEET, THIS WILL COUNT AS JUST ONE ENTRY). WINNERS WILL BE ANNOUNCED EARLY NEXT WEEK.

To learn more about Being Flynn you can visit the film’s official website by CLICKING HERE, and following the film on Facebook and YouTube.  The original motion picture soundtrack for Being Flynn, features 15 original songs by Badly Drawn Boy, including the tracks “I’ll Keep The Things You Throw Away,” “Asleep At The Wheel,” “Harbor Street Check-in,” and more.  If you can’t wait you can download it on iTunes or buy it from Amazon.  The soundtrack is available digitally now and physically on March 27th. 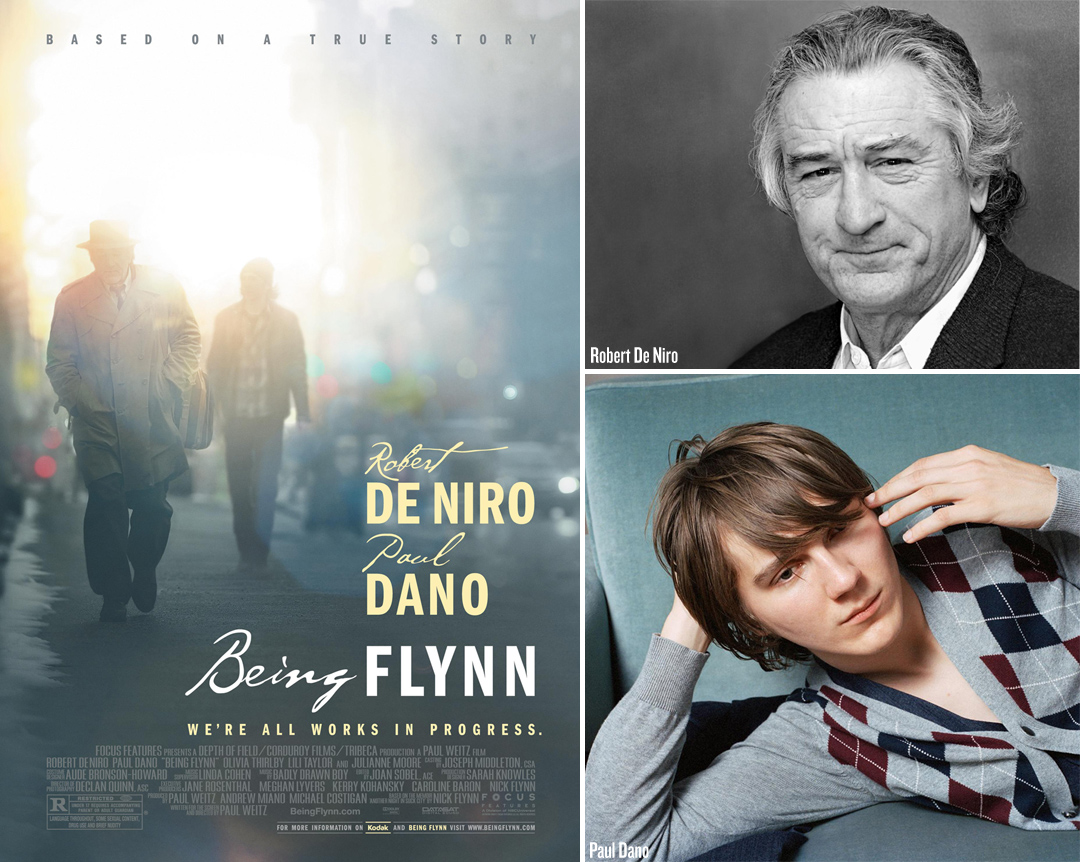 Previous post:
Goosebumps & Tears: Watch Neil deGrasse Tyson Explain “The Most Astounding Fact In The Universe” Next Post:
The Highly Anticipated Trailer For “On The Road” Is Finally Released (And It’s Pretty Amazing)