I was at work the other day when I first heard SHIGETO‘s remix of Sufjan Stevens’ gorgeous song “Futile Devices” from his 2010 album The Age Of Adz, and I was instantly taken away to a very magical place.  I’ve written in great length here on FEELguide about my reverence for the power of music, how I regard it as the most profound form of art, and my fascination with the phenomenal speed with which music can spin one’s mind from one atmospheric state to the next.  Film or literature can take several minutes — or even hours — to evoke the same level of emotion in the human brain as a truly great piece of music can almost instantly.

I would not only rank Sufjan Stevens near the top of my list of potential future husbands, he is a force of nature as far as I’m concerned, and any brilliant remix such as this one is as much a love letter to the original artist as it is a testament to how the DNA of a brilliant song can lend itself to rearrangement, transfiguration, and new potential realities.  And in this case, SHIGETO’s love letter to Sufjan’s “Futile Devices” cast my mid-workday mind adrift with daydreams of a great big campfire, a lakeshore forest filled with chirping crickets and fireflies, and a close-knit circle of storytelling friends beneath a glistening dome of stars with the looping sound of lapping waves nearby, and a whole lot of sand between our toes.  The entire 4:08 tribute to Sufjan is as good as it gets as far as I’m concerned, and has once again reminded me of the Magnificent Mr. Stevens’ incomparable talent as a master storyteller, singer, songwriter, and musician.

Combing throught the Web, I discovered a lovely little story written by Sufjan himself on April 24, 2009 which was published on the site of his Michigan-based record label Asthmatic Kitty.  He tells the charming story of how his parents had once sat him down when he was younger and confessed their embarrassment of having given him such an unusual name:

“‘We were out of our minds!’ [my parents] admitted.
‘We didn’t know what we were thinking!’  To make up for it, they said
I could change my name to anything I wanted. Anything at all. Something familiar,
normal, American, easy-to-spell, perhaps? It was totally up to me.  What democracy!
What fun!  I scanned the possibilities: Benjamin, Jason, Derek, Chad.”

Sufjan explains how after weeks of test-driving new potential names, he decided to keep Sufjan in the end because it was the only one that felt right.  He said his parents were equally confused as they were relieved, mainly because they discovered while Sufjan was bounding names around that they didn’t actually have enough money to pay for the expensive legal fees associated with changing a name.  As the years went on, Sufjan found himself in college where his fascination with names continued as he dedicated several songs to such friends as Mary, Chris, and even his imaginary confidant Sofia Coppola with “Sofia’s Song”.  As any burgeoning creative individual (especially a musician) of that age can testify, giving birth to these incredibly personal forms of expression allows people to see inside your soul, thereby making oneself much more vulnerable — especially to criticism.  For Sufjan, his imaginary confidant, Sofia Coppola, provided him the unconditional love and support during those early college years — an imaginary friendship, he explains, “where singing out of tune was perfectly OK!”  You can read Sufjan’s full story by visiting AsthmaticKitty.

You can enjoy SHIGETO’s gorgeous remix of “Futile Devices” below, as well as listen to Sufjan’s dedication to his friend Sofia.  For enter the magical world of Sufjan Stevens be sure to visit Music.Sufjan.com (where you can purchase his entire brilliant catalogue), follow him on Facebook, and check out his label AsthmaticKitty.com.  For the ultimate Sufjan Steven’s fan club you can head over to FuckYeahSufjanStevens.tumblr.com.  For all things SHIGETO you can visit IAMSHIGETO.com, follow him on Facebook, and check out his bio on his label Ghostly International.  To download your own free copy of SHIGETO’s remix of “Futile Devices” simply click on the grey arrow on the right-hand side of the Souncloud below: 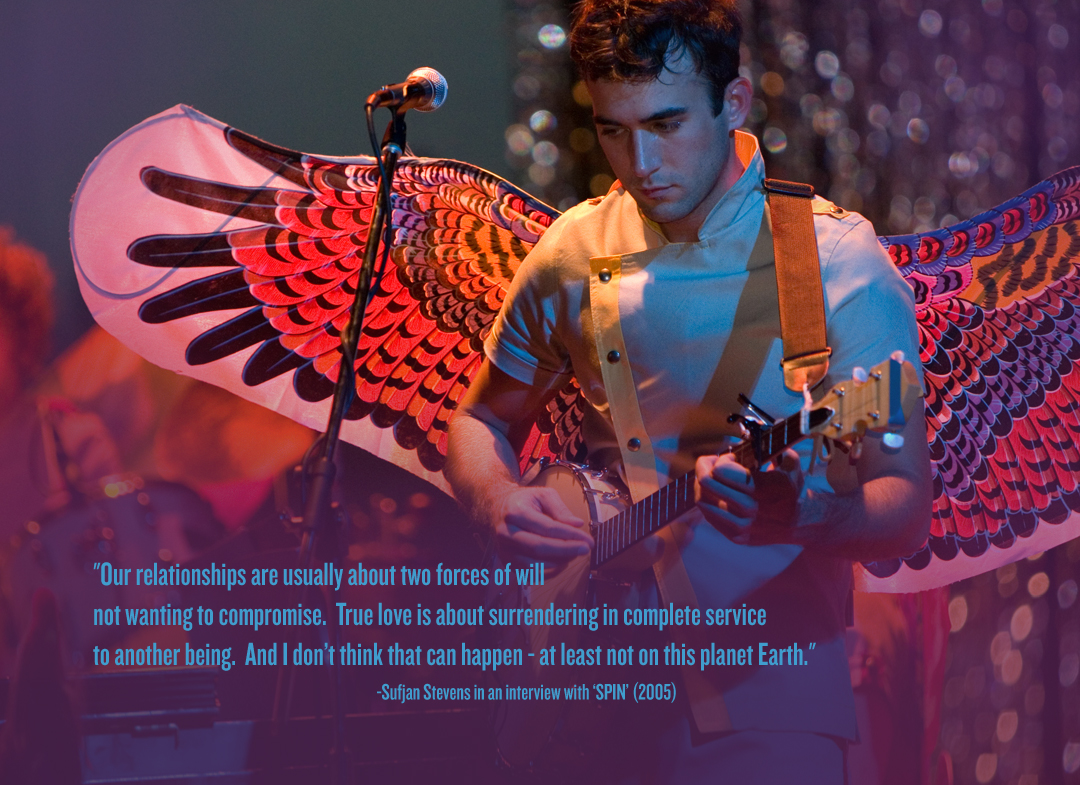 Previous post:
FALCON LAKE Released His Dreamy “Drown” EP And Gives It Away For Free Just For You Next Post:
Popular Science Explains How You Can Upload Your Consciousness Into A Robotic Shell