Years ago a very close friend of mine, who so happens to be the most learned psychologist I have ever known, told me about the very first lesson learned on day number one by any student embarking on an education in psychology.  He said how the first thing one must know when beginning this venture of understanding the human mind is how the majority of all human suffering is inherently connected to one solitary source: the emotion of regret.  It would be impossible to live one’s life without experiencing this heavy emotion, and most of us will spend our entire lives without fully unpacking these complex boxes in order to do away with them.  The fact that somehow we never manage to achieve a complete resolution of these impossibly difficult mental wars within ourselves could very well be an indication that they are indeed essential to the human experience, and may even tell us that they, in fact, make us all the better for it.

Someone who understands this inner war better than most is Bronnie Ware, an Australian nurse who spent several years working in palliative care, caring for patients in the last 12 weeks of their lives. She recorded their dying epiphanies in a blog called Inspiration and Chai, which gathered so much attention that she put her observations into a book called The Top Five Regrets of the Dying.  Ware writes of the phenomenal clarity of vision that people gain at the end of their lives, and how we might learn from their wisdom. “When questioned about any regrets they had or anything they would do differently,” she says, “common themes surfaced again and again.”  The following are the top five regrets of the dying, as witnessed by Ware and recently published by in a feature story by The Guardian:

1. I wish I’d had the courage to live a life true to myself, not the life others expected of me.  “This was the most common regret of all. When people realise that their life is almost over and look back clearly on it, it is easy to see how many dreams have gone unfulfilled. Most people had not honoured even a half of their dreams and had to die knowing that it was due to choices they had made, or not made. Health brings a freedom very few realise, until they no longer have it.”

2. I wish I hadn’t worked so hard.  “This came from every male patient that I nursed. They missed their children’s youth and their partner’s companionship. Women also spoke of this regret, but as most were from an older generation, many of the female patients had not been breadwinners. All of the men I nursed deeply regretted spending so much of their lives on the treadmill of a work existence.”

3. I wish I’d had the courage to express my feelings.  “Many people suppressed their feelings in order to keep peace with others. As a result, they settled for a mediocre existence and never became who they were truly capable of becoming. Many developed illnesses relating to the bitterness and resentment they carried as a result.”

4. I wish I had stayed in touch with my friends.  “Often they would not truly realise the full benefits of old friends until their dying weeks and it was not always possible to track them down. Many had become so caught up in their own lives that they had let golden friendships slip by over the years. There were many deep regrets about not giving friendships the time and effort that they deserved. Everyone misses their friends when they are dying.”

5. I wish that I had let myself be happier.  “This is a surprisingly common one. Many did not realise until the end that happiness is a choice. They had stayed stuck in old patterns and habits. The so-called ‘comfort’ of familiarity overflowed into their emotions, as well as their physical lives. Fear of change had them pretending to others, and to their selves, that they were content, when deep within, they longed to laugh properly and have silliness in their life again.”

The following is a brief description of Ware’s upcoming book: “After too many years of unfulfilling work, Bronnie Ware began searching for a job with heart. Despite having no formal qualifications or experience, she found herself working in palliative care. Over the years she spent tending to the needs of those who were dying, Bronnie’s life was transformed. Later, she wrote an Internet blog about the most common regrets expressed to her by the people she had cared for. The article, also called “The Top Five Regrets of the Dying”, gained so much momentum that it was read by more than three million people around the globe in its first year. At the requests of many, Bronnie now shares her own personal story. Bronnie has had a colourful and diverse past, but by applying the lessons of those nearing their death to her own life, she developed an understanding that it is possible for people, if they make the right choices, to die with peace of mind. In this book, she expresses in a heartfelt retelling how significant these regrets are and how we can positively address these issues while we still have the time. ‘The Top Five Regrets of the Dying’ gives hope for a better world. It is a story told through sharing her inspiring and honest journey, which will leave you feeling kinder towards yourself and others, and more determined to live the life you are truly here to live. This delightful memoir is a courageous, life-changing book.”

To learn more about the life work of Bronnie Ware be sure to visit her blog Inspiration and Chai, as well as her main site BronnieWare.com.  To pre-order your own copy of her brand new book you can do so via Amazon.  The Top Five Regrets of the Dying is being released by Hay House Publishing on May 20, 2012.  To learn more about regret, the negative conscious and emotional reaction to personal past acts and behaviors, CLICK HERE. 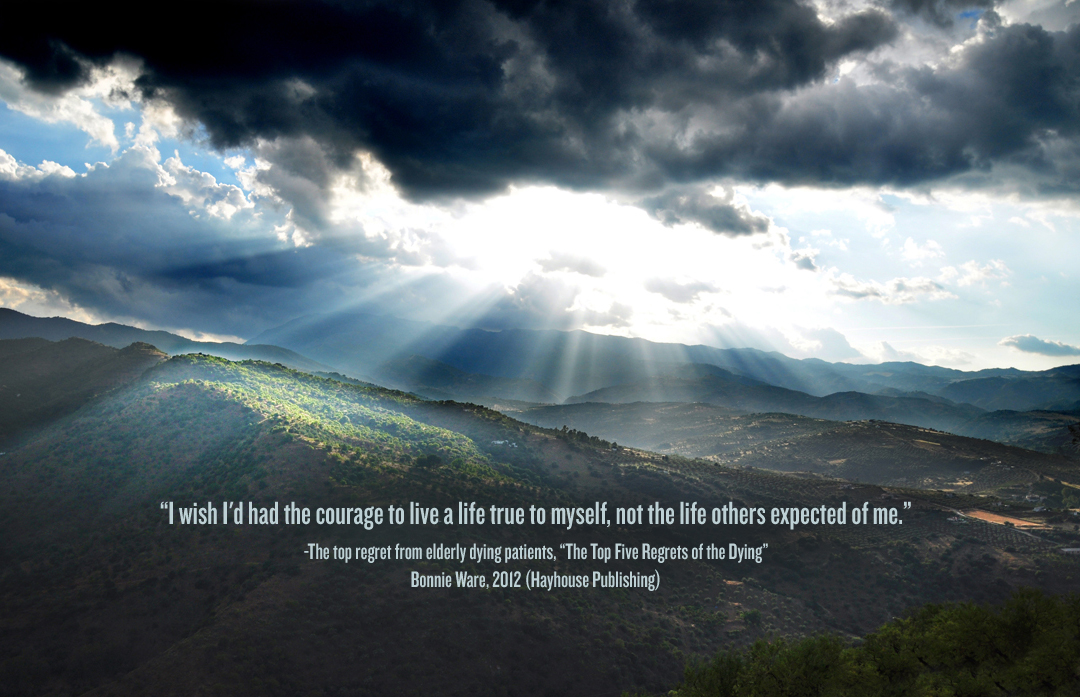 Previous post:
Banner Photo #68: The Mayan Calendar Explained Next Post:
The Incredible Story Of How Disco Changed Music, Civil Rights, And Freedom Forever, And Continues To Live On