New Zealand based designer Phil Cuttance is the man behind the beautiful Faceture series of lampshades and vessels.  In the lovely vignette video you are about to see, Cuttance reveals the process behind his creations, and the final result is quite simply poetic.  Cuttance explained in more detail to Yatzer what goes into each piece: “First the mould of the object is hand-made by scoring and cutting a 0.5mm plastic sheet. This sheet is then folded, cut and taped into the overall shape of the product that is to be cast. The mould’s final shape, and strength, is dictated by which triangular facets I pop in and out. I do this each time I ready the mould for the next object, meaning that no two castings are the same. I then mix a water-based casting resin that is cast in the mould where it sets. The resin is poured into the hollow mould and rolled around to coat and encase the sides which is controlled by me on the casting jig on the machine. The material soon sets creating a hollow solid object. Then another, different coloured measure of resin is poured into the same mould, and swirled around inside, over the first. When it has set, the mould is removed to reveal the solid set cast piece. The casting takes shape complete with sharp accurate lines and a digital quality to its aesthetic, a visual ‘surprise’ considering the ‘lo-fi’, hand-made process involved. The mould is then cleaned and ready for re-use.”  To learn more about the process as well as the story behind the table itself you can head over to Yatzer.  To enter the world of Phil Cuttance be sure to visit his website at PhilCuttance.com. 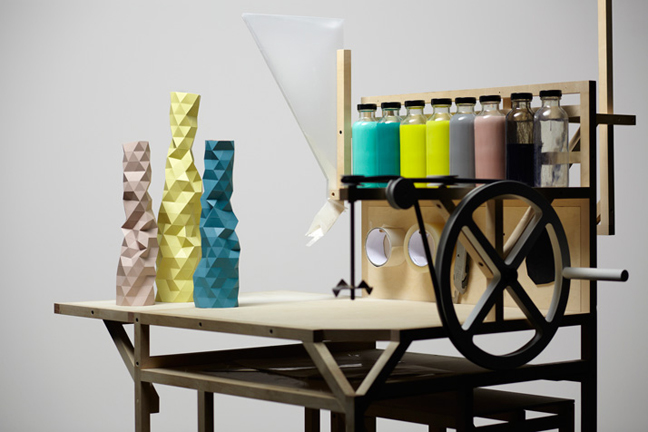 Previous post:
The 60th Anniversary Of The Nazi Invasion Of Winnipeg, Manitoba (Yes, You Read That Right) Next Post:
Meet Magnus Carlsen: The 21-Year-Old Millionaire Model And Borderline Supernatural “Mozart Of Chess”