It’s a bright, cold, and early Sunday morning and the TV in my bedroom is flickering with news footage of a very surreal intersection between celebrity and tragedy.  As you will likely see yourself, the footage shows news reporters gathered last night in front of the Beverly Hilton Hotel for a pre-GRAMMY party at the very same time as coroners, police, and forensic investigators descended on the hotel to remove the body of Whitney Houston (1963-2012) who had passed away earlier in the day from an as yet unknown cause.  When Gladys Knight was asked on the red carpet of the Hilton about Houston’s talent, she replied: “No one has ever come close to that voice.”  And Barbra Streisand wrote: “She had everything, beauty, a magnificent voice.  How sad her gifts could not bring her the same happiness they brought us.”

As the news flickered in the background on mute I began listening to CHROMATICS‘ brand new second single, a beautiful cover of Neil Young’s “Hey Hey, My My (Into The Black)” which bookended Young’s 1979 album Rust Never Sleeps,  and it’s created a strange parallel with the life of Whitney Houston this morning, considering the history of the original recording and the trajectory of Houston’s final years.  Young wrote the song out of frustration and sadness in response the rise of punk and what Young viewed as his own growing irrelevance, yet ironically “Into The Black” not only crossed generations (and continues to do so in 2012), but it was also embraced by the very same alternative punk scene which Young felt was creating a vacuum in youth culture, and significantly revitalized Young’s then-faltering career.  The song is about the alternatives of continuing to produce similar music (“to rust” and “to fade away”) or to burn out, as John Lydon of the Sex Pistols might be considered to have done by abandoning his Johnny Rotten persona.  The song was also cherished by the grunge scene, and a part of a lyric from the song, “it’s better to burn out than to fade away,” became infamous in modern rock after being quoted in Nirvana frontman Kurt Cobain’s suicide note.  Young later said that he was so shaken that he dedicated his 1994 album Sleeps with Angels to Cobain.  Because of Cobain’s suicide, in live concerts Young now emphasizes the line “once you’re gone you can’t come back.”

The gorgeous title track from Kill For Love was released last October and you can hear and read its full story in the link below.  The complete album is set for release very soon, and to download your own free copy of CHROMATICS’ cover of Neil Young’s “Into The Black” simply head over to Johnny Jewel’s Soundcloud.  You can follow CHROMATICS on MySpace, Facebook, as well as their label’s website by CLICKING HERE, and to read more about the life and death of Whitney Houston be sure to visit The New York Times. 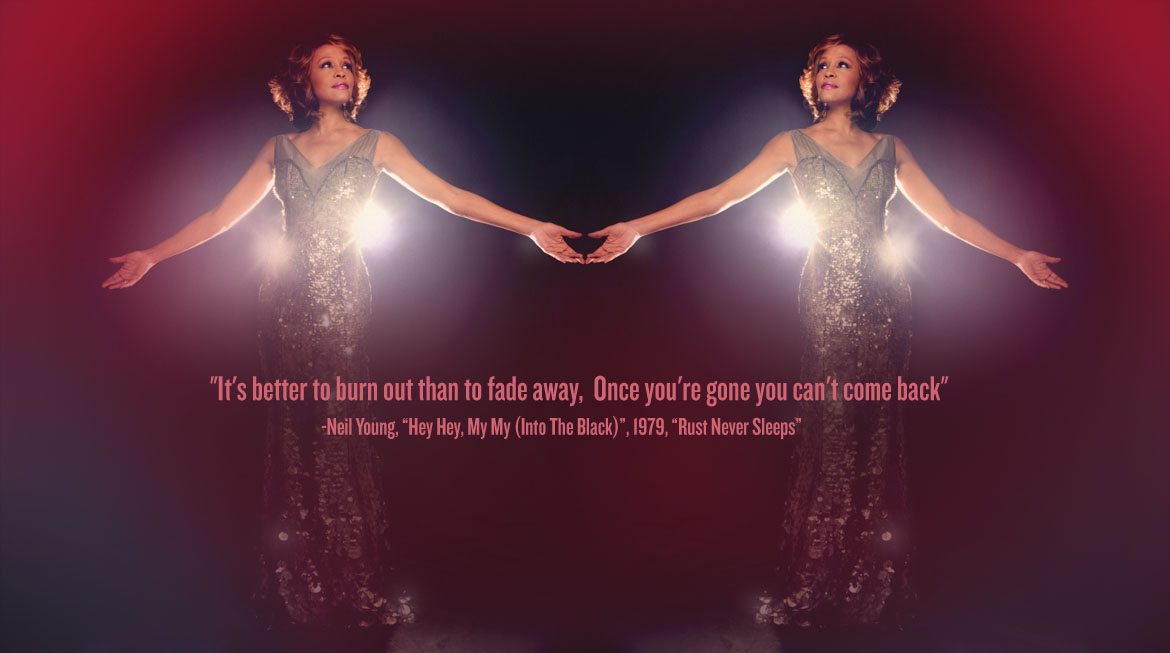