Banner Photo #65: Kicking Off My Movie Adventure With The Smurfs

For the past several months I’ve had a fairly light schedule with regards to my design career in the film industry.  This slow period in Montreal’s movie business has given me an amazing chance to put 100% of my time and creative energy into FEELguide which has been incredibly rewarding.  As of this week FEELguide is 16 months old and to be perfectly honest, I’m not sure what I did with all my time before I started this venture.  As the great American mythologist, writer and lecturer Joseph Campbell once wrote:

“Follow your bliss, and doors will open for you where there weren’t ever doors before.”

FEELguide has become my own personal bliss and has given me the creative voice I had been searching for my entire adult life; and it hasn’t just opened doors for me, it’s also become one of my best friends.  I realized it last week when I sat down to do a daily batch of posts that I had developed the same feelings for this project as I have for my closest group of friends.  I care about it, I cultivate it, I grow with it, and yes — I even talk to it.  Not literally of course, but more so in a figurative sense in the way a writer would slowly build a novel over the span of many months and years.  I wasn’t exactly sure what FEELguide would become when I started, but over the course of its development it’s taken on a life and character of its own.  Having the luxury of being able to spend so much time with this friend over the past several months has been nothing short of a blast.

As of this week, however, I’m going to be spending a lot of time with another group of friends — The Smurfs.  For the next few months I’ll be busy in the art department working on the set designs for the sequel to the 2011 live action/animation film The Smurfs directed by Raja Gosnell.  The hours are long — usually 8am to 7pm everyday — which gives me a few hours each night to work on FEELguide.  Last fall I spent about 6 weeks working on the 3rd chapter of the Chronicles Of Riddick franchise and I managed to find a nice balance of a quick FEELguide post in the morning, followed by a long day’s work, followed by a few more posts before getting some shut eye.  It sounds like a lot, but FEELguide doesn’t feel at all like work to me — it’s pure creative bliss.  So in the coming months if you happen to notice a slight reduction in post size and frequency on FEELguide this is why.  My goal has always been to do at least 4 posts a day, but don’t be surprised if it dips to 3 on a rushed day.

Last July when the first Smurfs movie was released I had written a long post about the history of the franchise from its beginnings as a comic strip in 1958 by Belgian illustrator Peyo all the way up to the film’s release.  Why did it take so long to bring these beloved creatures to the big screen?  To read the full FEELguide story CLICK HERE.  And be sure to follow FEELguide on Facebook and Twitter. 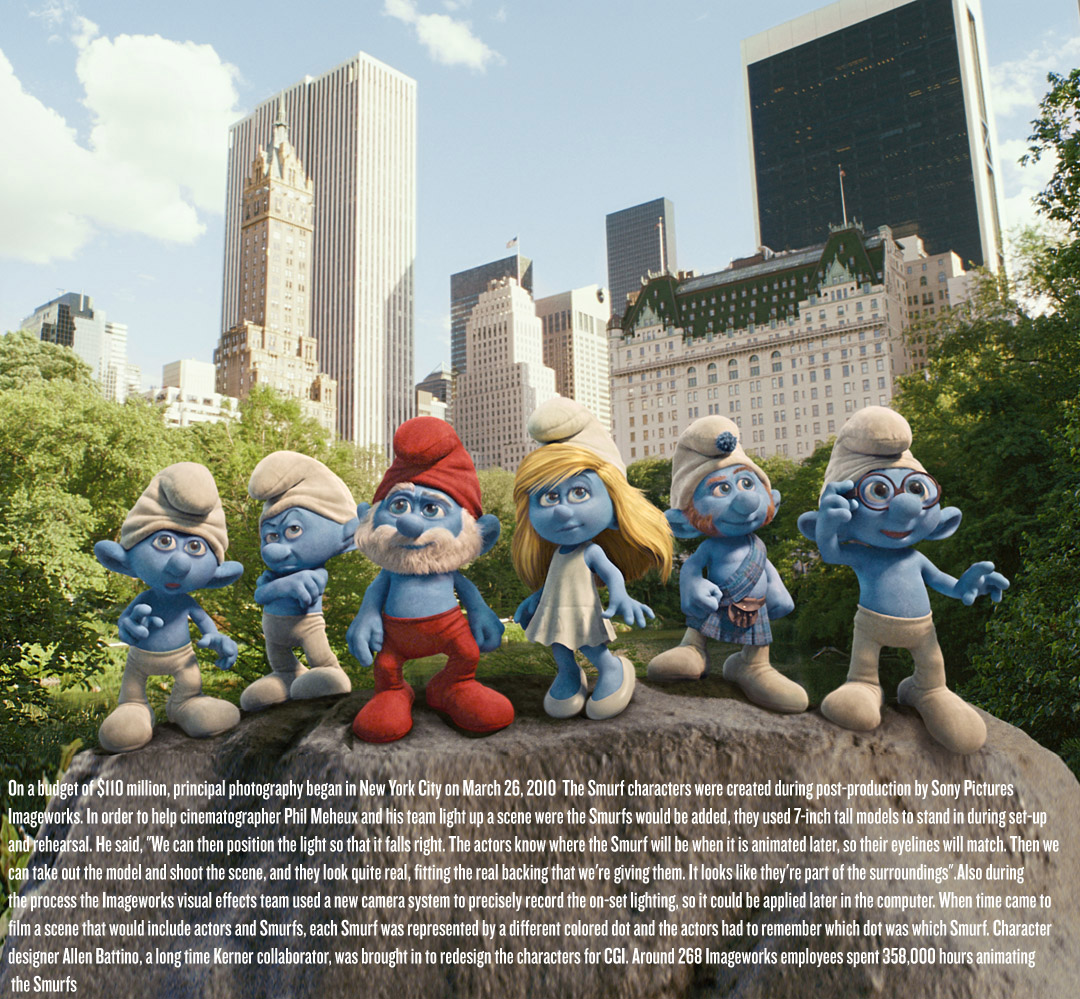