“What Kind Of Bird Are YOU?” Deconstructing The Patterns & New Ground In The “Moonrise Kingdom” Trailer

When Albert Einstein said so famously “Imagination is more important than knowledge,” he was speaking about the infinite power and wisdom of a child’s mind. With each passing year Einstein became more and more passionate in his conviction that in order to discover the answers to the greatest mysteries of this universe, one must first begin with the greatest questions. And in Einstein’s opinion, no one asks more profound questions than children (i.e. “If you are staring in a mirror while travelling at the speed of light would you still see your reflection?”) The imaginative brains of our world are very much like those countless baby sea turtles hatching along the warm sandy beaches of the sunbelt: they explode into this world in a burst of wonder, run towards the sea of life, and 99.9% of them are eaten alive by a very cruel world. Some, however, manage to survive, and return to their breeding grounds to inspire and incubate even more wonder and imagination. Director Wes Anderson is one of these minds, and if Einstein were still alive he would be Anderson’s number one fan. The world’s greatest physicist also once said: “If you want your children to be intelligent, read them fairy tales. If you want them to be more intelligent, read them more fairy tales.” And in a parallel universe I can almost picture Einstein saying these words with his arm wrapped around Wes at the premiere of Moonrise Kingdom.

It’s been five years since Wes Anderson’s last film with actual live human beings, The Darjeeling Limited, was released in 2007 (although I would argue his incredible cast of creatures in 2009’s Fantastic Mr. Fox are far more three dimensional than most of the characters I see in live action films these days). So when the trailer for Moonrise Kindgom hit last week it caught on like a wild fire. Once again, Anderson has created a world so uniquely Andersonian it led the team at The Playlist to take a deeper, closer look at the recurring motifs and patterns embedded in the trailer, Anderson’s career in general, as well as the new ground Anderson appears to be forging. The following is an abbreviated version of the breakdown:

1. THE COPPOLA CONNECTION: Ever since casting Francis Ford Coppola‘s nephew Jason Schwartzman in Rushmore 14 years ago, Anderson has become as much a part of the Coppola family as one possibly could without being a blood relative. Moonrise Kingdom was co-written by Roman Coppola, and the pair are a shining example of what can happen when two kindred spirits collaborate. They also co-wrote The Darjeeling Limited together (along with Schwartzman), and Anderson also cast Roman in Fantastic Mr. Fox, as well as the commercial he directed for American Express (Roman was also a producer of Darjeeling, and shot 2nd unit photography as well). Wes and Roman also co-directed a ’60s-set ad for Stella Artois, and Coppola has cast Anderson regular Bill Murray in his upcoming directorial effort, A Glimpse Inside The Mind of Charles Swan III. The characters in Darjeeling, Francis, Peter and Jack are supposedly named after Coppola, Bogdanovich and Nicholson who were all close friends in the late ’60s while making movies for Roger Corman. Anderson also staged the final scene of The Life Aquatic in homage to a picture of Francis and Sofia at the Cannes Film Festival in 1979, and the writer featured in his AMEX commercial bears more than a passing resemblance to The Godfather director in his younger days. As The Playlist also noticed, Moonrise lead Jared Gilman looks like he could be a member of the Coppola clan or at the very least related to Max Fischer.

2. CHILDREN RUNNING AWAY: In 2001’s The Royal Tenenbaums, young Margot and Richie Tenenbaum run away at the film’s beginning, escaping to the New York Museum Of Natural History. In Moonrise Kingdom, Sam and Suzy run off to New Penzance Island, an island which bears a striking resemblance to Eagle’s Island in Tenembaums.

3. LETTER WRITING AND PAINTINGS: The exchanging of letters is a major device in nearly every one of Anderson’s films. Bottle Rocket has Anthony writing letters to his failed sister Grace, and Tenembaums has Richie writing to his buddy Eli wherein he confesses his love for his adopted sister Margot. Rushmore also features a terrific exchange of letters between Max and former best friend Dirk. Life Aquatic, Darjeeling, and Moonrise Kingdom each use letter writing to strong effect.

4. COMPOSITION: Anderson is meticulous with his compositions and production design, often going to incredibly elaborate lengths to get one solitary shot. In Moonrise Kingdom, it appears as if his 6th collaboration with longtime Director of Photography Robert Yeoman (who shot all of Anderson’s live action films) is venturing into even deeper, more deliciously surreal terrain. Several of the shots in Moonrise would not have been out of place in Fantastic Mr. Fox.

5. RELIGIOUS SUBTEXT: Apart from two children escaping the uptight morals of their community, the short preview of Moonrise Kingdom reveals even more of its religious connection. Notice the doghouse on fire with the words “PREPARE TO MEET THY GOD” scratched into the rocks nearby, and the miniature church that the two kids are exiting at the end of the clip. As The Playlist notes, Anderson’s characters are each struggling more with internal forces compared to external. The collision in Moonrise Kingdom has clearly provided Anderson with a huge new playground to explore the human condition.

6. WHAT KIND OF BIRD ARE YOU?: In The Royal Tenenbaums, young Margot Tenenbaum produces a play where all the kids are sporting animal costumes. In Moonrise Kindgdom, Suzy is starring in a play where all her co-stars are dressed as birds. The hawk costume that Suzy is wearing connects to a hawk featured in Tennenbaum named Mordecai (a part that was originally written for Jason Schwartzman). 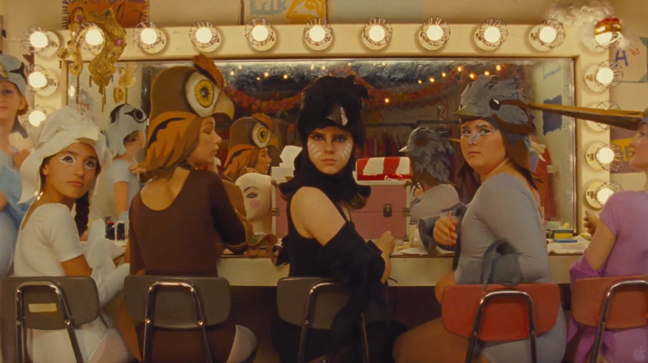 You can read the entire incredible feature essay at The Playlist where writer Cory Everett goes even deeper, touching on SEVEN more categories:

To read the entire feature simply head over to The Playlist. Moonrise Kingdom opens on May 25, 2012. As you watch the trailer below, try and focus on these words from King Einstein himself: “Imagination is everything. It is the preview of life’s coming attractions.” I like to think of Anderson’s films as mirrors through which we are reminded to never let go of our youthful imaginations. Andersonian fairytales that indeed are travelling at the speed of light — as well as 24 frames per second.

SEE ALSO: “What Kind Of Bird Are YOU?” The First Trailer For “Moonrise Kingdom” 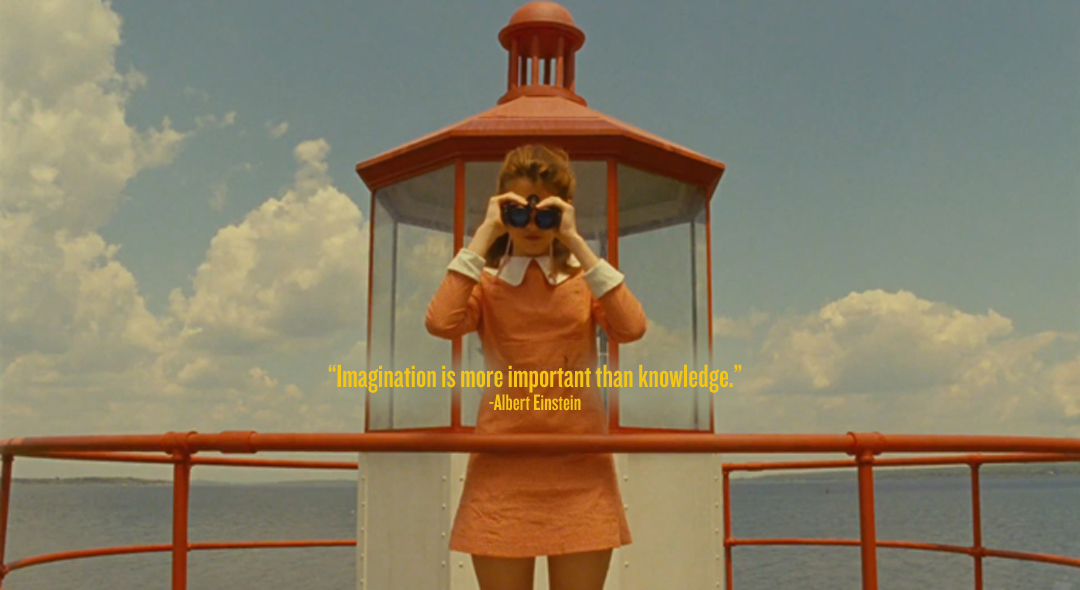