The 1984 Interview Between Andy Warhol And Living Legend Dolly Parton: “Don’t Mess With Me”

Having grown up in The Ottawa Valley where country music was — and still is — the predominant force of the cultural landscape, Dolly Parton remains nothing short of a force of nature. The road to the peak of Hollywood is an impossibly arduous one, paved with countless trampled souls and countless trampled dreams. So one would think the odds of a bright-eyed “dirt poor” young girl from the Great Smoky Mountains of Tennessee ever reaching the heights of Tinseltown would be impossible. But then again, for a legend such as Dolly Parton, odds have never played any role when it comes to getting what she wants. Parton’s path to Hollywood has been one built purely on incomparable talent, and her own trample-proof dreams made of pure steel. Since the day she was born on January 19, 1946, it seems as if this Steel Magnolia has always had an intuitive sense of knowing exactly “when to hold ’em, and when to fold ’em.” As part of their celebration of Dolly’s 66th birthday, Interview magazine reprinted this July 1984 sit down with the magazine’s founder, Andy Warhol, and the Queen Of The Smoky Mountains herself. The following is an excerpt from the interview which was held in the magazine’s Union Square office on St. Patrick’s Day, 1984. Looking trim and squeezable in white jeans, a red sweater and slick red boots with perilously high heels, Parton was in the midst of promoting Rhinestone, a project she developed for herself and co-star Sylvester Stallone. Her drive was as strong back then as it is today: “I’m still not the star I’m going to be,” she revealed to Warhol and writer Maura Moynihan with characteristic candor. The following is an excerpt from that interview:

ANDY WARHOL: Where is Maura? Maybe she got caught in the parade.
DOLLY PARTON: Maybe she got hooked up with a horny leprechaun somewhere, dressed in green with no pants on.
WARHOL: Do you want some lunch?
PARTON: I’d love a glass of white wine.
WARHOL: How did you like working with Sylvester Stallone?
PARTON: I think he’s beautiful. I’d never seen him in person before I started on Rhinestone. I was surprised when I first saw him because I thought he would be gigantic. When I had my surgery I decided I had to get myself in better shape, eat better, because I just turned 38. I lost all of my weight before I even met Sly. He’s a great inspiration to be around, though. He was more than happy to help me. I loved working with him, he’s a great person.
MOYNIHAN: How many wigs do you have?
PARTON: I don’t know, I’ve got better things to do than count them. But I wear one every day of the week, so probably 365.
WARHOL: How long were you sick [during the filming of ‘Whorehouse’]?
PARTON: I’d never really been sick in my life until a couple of years ago, and then I was sick for 18 months to two years. It was brought on by a lot of emotional problems that I was having. I had to make a lot of decisions with a lot of people I had been with for years and years, and we were not helping each other emotionally. We did great business together, but it was just very hard. I just had to shuffle a lot of things around in my life and make some decisions that were very painful, and I’m a very sensitive person.
MOYNIHAN: Did you have to fire some people?
PARTON: Yes, but I’ve always done my own hiring and firing. But in this particular case, I was going through a lot of problems with family and stuff.
MOYNIHAN: With [your husband] Carl?
PARTON: No, me and Carl are fine. We have no problems at all. We’ve been together for 20 years, and we’ve been married for 18. First time for him and first time for me.
MOYNIHAN: How did you meet?
PARTON: I met him the first day I got to Nashville, in 1964. I graduated on a Friday night, went to Nashville on a Saturday morning with dirty clothes and I went to a Laundromat looking for anything but love. I had just left two boyfriends back home and I wasn’t looking to get involved because I had gone to Nashville to really get started in the business. I met him at the Why Washy and he’s been wishy washy ever since. We dated for two years before we got married. I often get myself in love trouble because I’m so passionate; I love so much and so deep. But Carl’s a special guy, I didn’t have any problems with him.

You can read the entire interview with Dolly Parton and Andy Warhol by visiting Interview magazine. To read more about the extraordinary life of Dolly Parton CLICK HERE. For all things Dolly be sure to visit her official websites: DollyPartonMusic.net and DollyParton.com. You can also follow Dolly on Facebook. And in case you’ve never seen her incredible performance of “Coat Of Many Colors” you can watch it below. I’ve also attached a clip of Steel Magnolias, a 1977 Barbara Walters feature profile, and a clip of Alison Krauss’s performance of “Jolene” at the December 3, 2006 gala tribute where Dolly Parton was inducted alongside Steven Spielberg into the Kennedy Center For The Performing Arts for her iconic contributions to American culture. You can watch the ceremony in full here: PART 1 and PART 2. 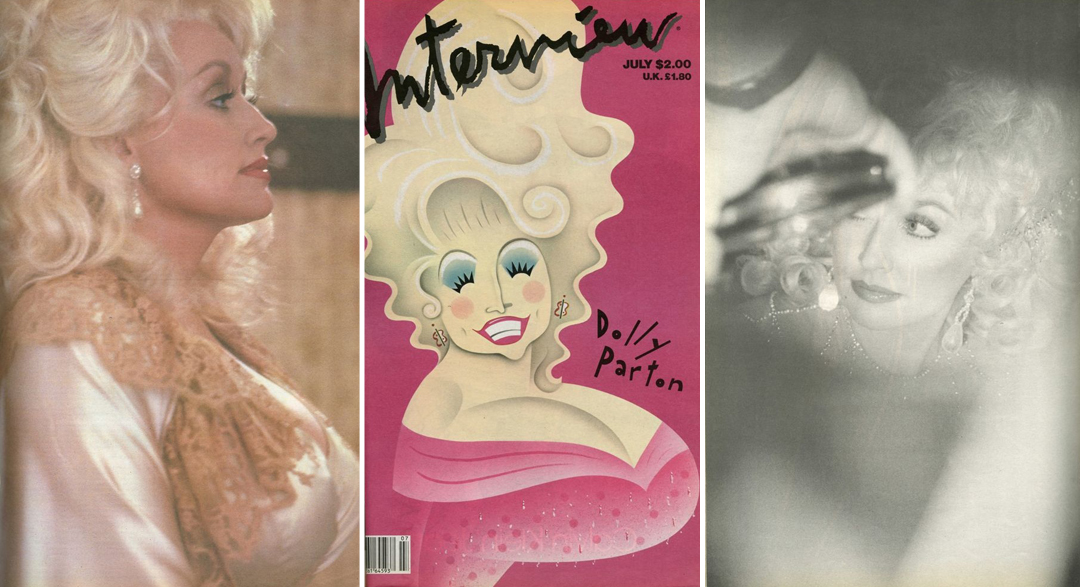 Previous post:
“What Kind Of Bird Are YOU?” Deconstructing The Patterns & New Ground In The “Moonrise Kingdom” Trailer Next Post:
How To Fly Fish With A Magic Harp: Active Child Releases A Gorgeous New Video For “Hanging On”