Charlie Rose Week On FEELguide: James Watson, The Man Behind The Discovery Of DNA’s Double Helix

Charlie Rose himself has said more often than once that his 2005 interview with James Watson and E.O. Wilson is one of his most cherished conversations.  Rose has conducted nearly 40,000 interviews in his career as a broadcast journalist, adding even more weight to the special place he holds in his heart for what you are about to watch.

The episode is a love letter of sorts to Charles Darwin (1809-1882), the English naturalist who established that all species of life have descended over time from common ancestry.  He proposed the scientific theory that this branching pattern of evolution resulted from a process that he called natural selection.  Darwin published his theory with compelling evidence for evolution in his 1859 book On the Origin of Species, overcoming scientific rejection of earlier concepts of transmutation of species.  By the 1870s the scientific community and much of the general public accepted evolution as a fact. However, many favoured competing explanations and it was not until the emergence of the modern evolutionary synthesis from the 1930s to the 1950s that a broad consensus developed that natural selection was the basic mechanism of evolution.  In modified form, Darwin’s scientific discovery is the unifying theory of the life sciences, explaining the diversity of life.

What Darwin did not understand was the exact mechanics of evolution.  This breakthrough came in 1953 when James D. Watson and Francis Crick published what is now accepted as the first correct double-helix model of DNA structure in the journal Nature.  Their double-helix, molecular model of DNA was then based on a single X-ray diffraction image (labeled as “Photo 51”) taken by Rosalind Franklin and Raymond Gosling in May 1952, as well as the information that the DNA bases are paired — also obtained through private communications from Erwin Chargaff in the previous years.  Harvard professor (emeritus) Edward O. Wilson is a two-time winner of the Pulitzer Prize for General Non-Fiction.  He is known for his scientific career, his role as “the father of sociobiology”, his environmental advocacy, and his secular-humanist and deist ideas pertaining to religious and ethical matters.

Charlie Rose’s interview with James D. Watson and Edward O. Wilson took place on Dec 14, 2005. Rose sat down once again with Watson on October 30, 2009 and I have included this interview below as well.  Two full hours’ worth of conversation that are evolving as beautifully in the digital world as nature is in her own. 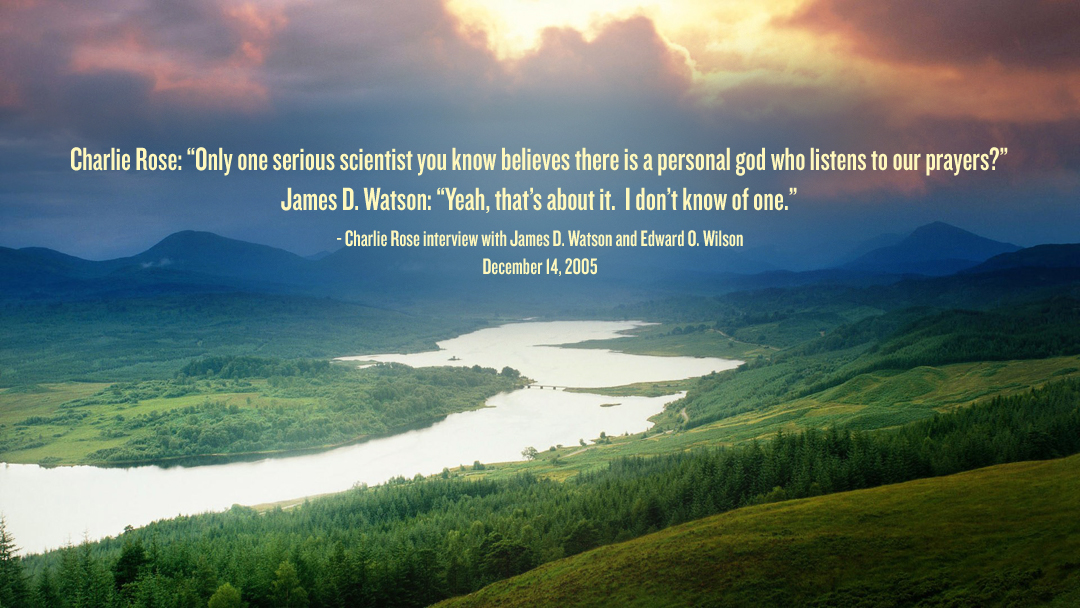 Previous post:
Slate On Why The Globes Are Better Than The Oscars: “Where Entertainers Are Rewarded For Being Entertaining” Next Post:
Change Your Attitude And Enjoy ME AND MY DRUMMER’s Gorgeous Video For “Runner (Reprise)”