Not Such A Sunny Delight: Everything You Need To Know About The Orange Juice Fungus & FDA Ban

Yesterday the Food and Drug Administration shut down all orange juice imports into the United States due to safety concerns.  It was prompted by a discovery made by Coca-Cola which owns, produces, and distributes Minute Maid™, Simply Orange™, as well as a huge number of other beverage brands (see the full list HERE).  Coca-Cola alerted officials at the FDA that “it had detected traces of an illegal fungicide in some of its juice as well as that of its competitors.”  Coca-Cola is not saying which brands were affected, but the FDA says there is no risk to consumers due to the “miniscule amounts” of the fungicide that have been detected.

The FDA has now begun a massive testing process of all orange juice imports in order to destroy the affected shipments — a process that could take days or even weeks.  Many people have been wondering this morning: why the large scale reaction to a small scale problem?  The FDA felt that legally, “once it heard Coca-Cola’s concerns, they had no choice but to start testing all of it — even though no health concerns are seen.  Consumer groups tell CBS News that while the FDA is probably right, the extent of any risk remains to be seen until all of the shipments are tested.  Once this testing phase is over, however, it’s unlikely they’re going to have the resources to do this testing on a permanent basis.”

In a hilarious stroke of serendipity, after I watched CBS’ report this morning, the commercial break that followed immediately afterwards had one of the funniest commercials I have seen in a long time — about orange juice, no less.  The ad entitled “Diner” was produced by the Florida Department Of Citrus as part of their Take On The Day campaign.  Each of the commercials features a person getting a glimpse into the mini disasters they can expect to encounter in the next 24 hours of their day.  Once the guy in the “Diner” ad is briefed on what he’s about to face, he replies: “Pfew!  Good thing I got my orange juice.”  Once you check it out below you’ll realize that he’s not worried about his OJ.  Nope, his real terror is the stalking psycho blonde he’s currently dating.  The HILARIOUS look he gives her at the 0:17 mark had me spitting out my own OJ all over my new duvet.  Good thing I got my stain protector. 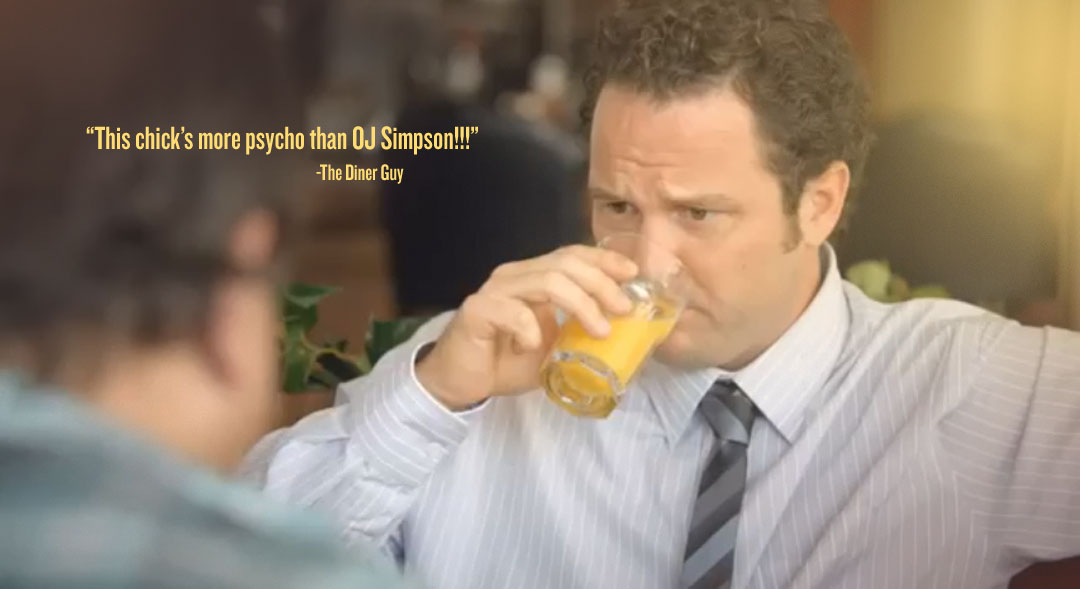