Lee Kuan Yew (born September 16, 1923) is a living legend in the world of global intergovernmental affairs.  He is the founding father of Singapore, and served as the country’s groundbreaking Prime Minister for more than 30 years from 1959-1990, making him the longest-serving PM in world history (NOTE: Lee’s son, Lee Hsien Loong, is the current Prime Minister of Singapore — you might recognize Loong from the incredible trailer for the documentary ‘Inside Job‘).  Lee Kuan Yew is the man behind the unprecedented transformation of Singapore from a small, weak, and vulnerable country into one of the most developed nations in Asia, despite its small population, limited land space and lack of natural resources.  Lee has often stated that Singapore’s only natural resources are its people and their strong work ethic.  He is practically a god in his home country, and the reverence for his accomplishments and brilliant mind are not restricted to Singapore’s borders.  Lee is admired in every corner of the world, serving as an advisor to Presidents and Prime Ministers around the globe who hang on his every word.

In October 2009, Lee was conferred the first Lifetime Achievement award by the U.S.-Asean Business Council at its 25th anniversary gala dinner in Washington, D.C..  In his tribute, former United States Secretary of State and 1973 Nobel Peace Prize winner, Dr. Henry Kissinger said: “He has become a seminal figure for all of us. I’ve not learned as much from anybody as I have from Mr. Lee Kuan Yew.  He made himself an indispensable friend of the United States, not primarily by the power he represented but by the quality of his thinking.”  Meeting the U.S. President at the White House Oval Office a day later, President Barack Obama introduced him as “one of the legendary figures of Asia in the 20th and 21st centuries.  He is somebody who helped to trigger the Asian economic miracle.”

Lee Kuan Yew’s model of economic transformation served as the primary inspiration for China’s own  reshaping.  In this, and many other regards, few people have had more direct influence in the shaping of the modern world  than Lee.  On April 29, 2010, Lee was named in the The 2010 TIME 100 list as one of the people who have most greatly affected our world.  Six months later on October 19, 2011, Lee received the Lincoln Medal in Washington D.C. — one of the most prestigious honors in the United States, bestowed upon those who have exemplified the legacy and character embodied by former President Abraham Lincoln.

Two years prior to receiving the Lincoln Medal, Lee had sat down with Charlie Rose for one of the most fascinating interviews I have ever seen in my entire life — and this is by no means an exaggeration.  In my opinion this should be mandatory viewing for anyone even remotely interested in how our world has changed over the past 50 years.  Furthermore, I have never seen anyone paint as clear a picture of what the next century will look like as Lee Kuan Yew has in the following hour-long conversation.  Truly remarkable. 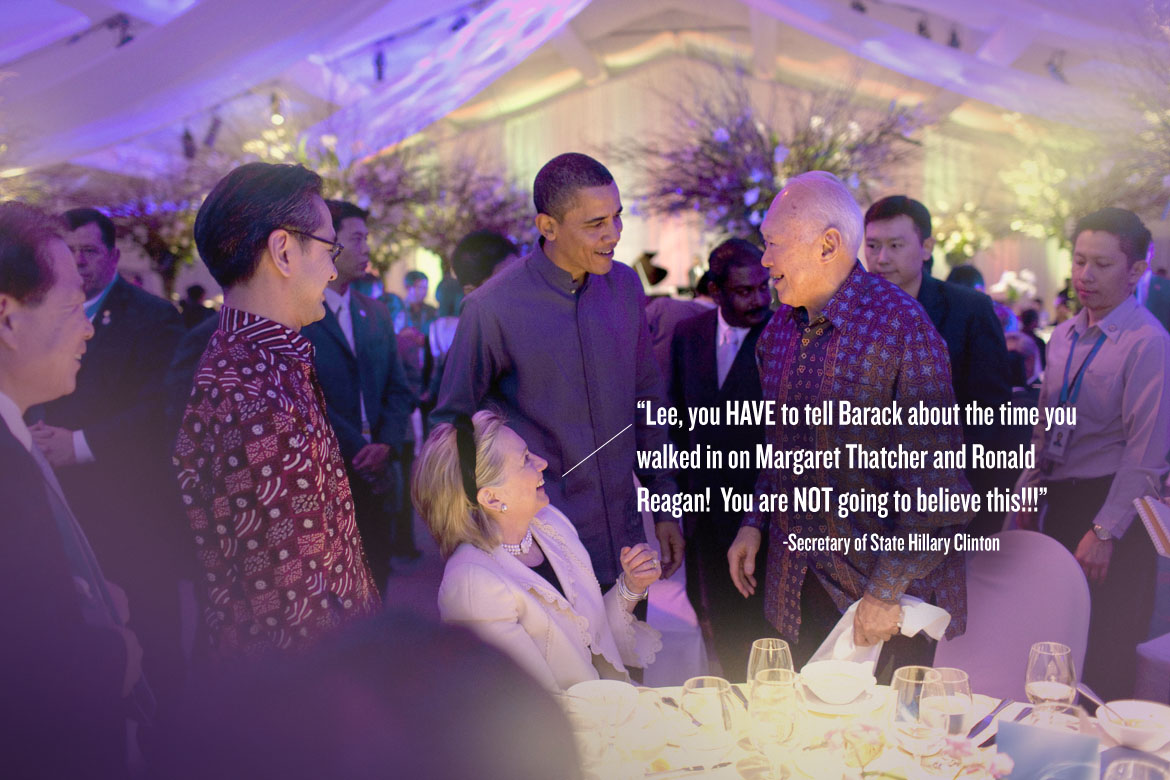