No one in Hollywood is having more fun intellectualizing their fame than James Franco.  A diehard patron of education, Franco himself has become as famous for his academic career as he is for his acting.  For the past several years Franco has immersed himself in some of the most challenging and mind-expanding learning environments any artist could ever dream of:

1.  Enrolled at UCLA in 2006 as an English major with a creative writing concentration. He received permission to take as many as 62 course credits per quarter compared to the normal limit of 19,  while still continuing to act. He received his undergraduate degree in June 2008 with a GPA over 3.5/4.0.  For his degree, Franco prepared his departmental honors thesis as a novel under the supervision of Mona Simpson.   While at the university, the actor studied French, the Holocaust, philosophy of science, and American literature among other things.  To continue acting, he would study on film sets.  Pineapple Express producer Judd Apatow has said of him: “He’s a very education-minded person. We used to laugh because in between takes he’d be reading ‘The Iliad‘ on set.  We still haven’t read ‘The Iliad’. It was a very difficult book. With him, it was always James Joyce or something.”

2.  He moved to New York to simultaneously attend graduate school at Columbia University’s MFA writing program, New York University’s Tisch School of the Arts for filmmaking, and Brooklyn College for fiction writing, while occasionally commuting to North Carolina’s Warren Wilson College for poetry.  He received his MFA from Columbia in 2010.

3.  He is a PhD student in English at Yale University & will also attend the Rhode Island School of Design

4.  He has been accepted to the University of Houston for the doctoral program—one of 20 people to be selected out of 400 applicants—in literature and creative writing and plans to enroll in fall 2012

6.  He is a regular volunteer at the charity The Art of Elysium (along with his Spiderman co-star Kirsten Dunst) which helps children with serious medical conditions.  He said the experience helped save his life.  He is also one of the top supporters of 826 National, a nonprofit organization dedicated to helping students, ages 6 to 18, with expository and creative writing at eight locations across the United States.  Franco became involved with 826 National after the organization asked him to create a conceptual proposal for the program, which resulted in a documentary Franco made for them.  At a recent 826 National event, Franco spoke about how he thought schools needed to be more original with their literature programs: “Writing can do things that video cannot.”

Over the past few years James Franco has been making some impressive contributions to the art world as well (read more about that HERE, HERE, HERE and HERE).  For his latest project he teamed up with documentary filmmaker Ian Olds and co-directed Francophrenia (Or Don’t Kill Me, I Know Where The Baby Is) which takes existing footage from Franco’s recent string of General Hospital appearances and reshapes it into a deliciously meta “humorous psycho-thriller”.  Love it!  The film is premiering soon at the International Film Festival Rotterdam.  On top of this news, James has just sold his first novel Actors Anonymous to Amazon.  The work is a “fictionalized version of Franco’s experiences as an actor.”  Very intriguing indeed.

Franco’s most recently published work is his collection of short stories entitled Palo Alto.  The book is described as: “being written with an immediate sense of place — claustrophobic and ominous — [tracing] the lives of an extended group of teenagers as they experiment with vices of all kinds, struggle with their families and one another, and succumb to self-destructive, often heartless nihilism. In ‘Lockheed’ a young woman’s summer — spent working a dull internship — is suddenly upended by a spectacular incident of violence at a house party.  In ‘American History’ a high school freshman attempts to impress a girl during a classroom skit with a realistic portrayal of a slave owner — only to have his feigned bigotry avenged.  In ‘I Could Kill Someone,’ a lonely teenager buys a gun with the aim of killing his high school tormentor, but begins to wonder about his bully’s own inner life.  These linked stories, stark, vivid, and disturbing, are a compelling portrait of lives on the rough fringes of youth.”  You can purchase your own copy of Palo Alto by visiting Amazon.  A spokeswoman for Amazon, which ventured into publishing in 2011, declined to discuss the terms of Franco’s book deal for his debut novel Actors Anonymous, and whether or not the book would be published in e-book, or print form, or both.  Ed Park, the editor who acquired the book, described it as “a hugely ambitious and wild ride.”  It is set to be released in 2013.  For all FEELguide posts related to James Franco CLICK HERE.

SEE ALSO: The Evolutionary Psychology Of Celebrity Obsession & The Top 8 Reasons Star Culture Exists
SEE ALSO: “The Frenzy Of Renown” Is A History Of Fame And Its Impact On Culture And Society Over The Past Several Thousand Years 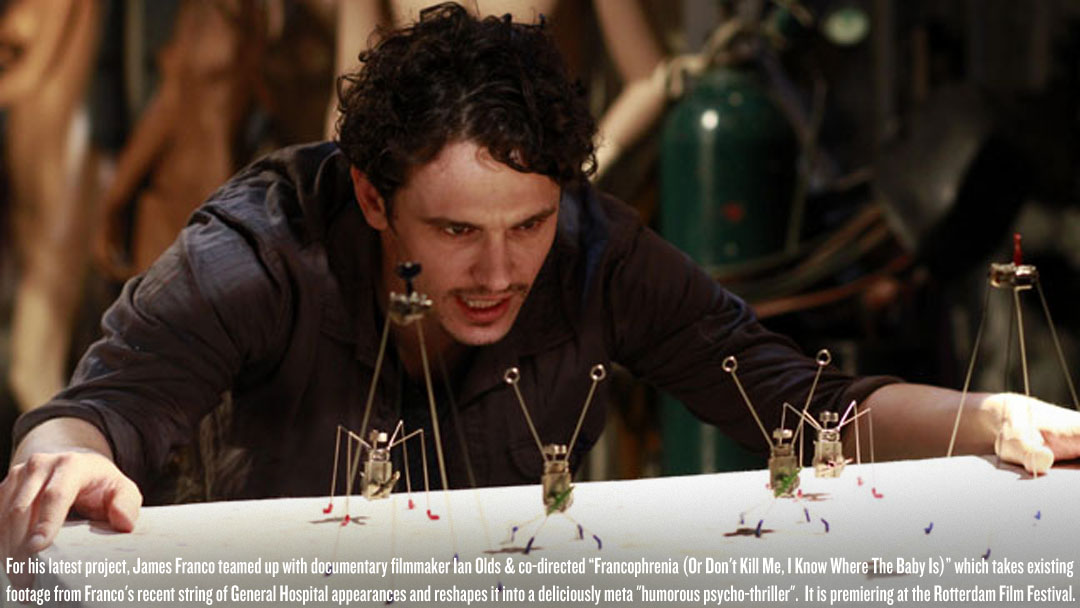 Previous post:
Feel Like Shakin’ That Ass? That’s All But Guaranteed With Expensive Looks’ Amazing New “Decisions” Mix Next Post:
Charlie Rose Week On FEELguide: Charlie Sits Down With Jeff Daniels To Talk About Zen And Country Music