On 26 May 1828, a teenage boy named Kaspar Hauser (1812 -1833) appeared in the streets of Nuremberg, Germany with stories about being raised in a dungeon, and although he was educated, Hauser claimed he had never once been allowed to leave his cell.  It was the first time he had ever stepped foot into the natural world.  Director Werner Herzog brought the true story to life in his 1974 film The Enigma Of Kaspar Hauser.  The following is the synopsis of Herzog’s film which he wrote himself, going to great lengths to be true to the real events by using the text of actual letters found with Hauser, and following many details in the opening sequence of Hauser’s confinement and release:

The film follows Kaspar Hauser who lived the first seventeen years of his life chained in a tiny cellar with only a toy horse to occupy his time, devoid of all human contact except for a man who wears a black overcoat and top hat who feeds him. One day, in 1828, the same man takes Hauser out of his cell, teaches him a few phrases, and how to walk, before leaving him in the town of Nuremberg. Hauser becomes the subject of much curiosity, and is exhibited in a circus before being rescued by Herr Daumer who patiently attempts to transform him.  Hauser soon learns to read and write, and develops unorthodox approaches to logic and religion, but music is what pleases him most. He attracts the attention of academics, clergy, and nobility, but is then physically attacked by the same unknown man who brought him to Nuremberg. The attack leaves him unconscious with a bleeding head. He recovers but is again mysteriously attacked, this time stabbed in the chest. Hauser rests in bed describing visions he has had of nomadic Berbers in the Sahara Desert, and then dies. An autopsy reveals an enlarged liver and cerebellum.

Now the story is being updated by director David Manuli in The Legend Of Kaspar Hauser set to premiere soon at the International Film Festival of Rotterdam.  Vincent Gallo, the renegade writer/actor, director/producer, musician/fascinator, signed on to the film last spring and took on two roles in two different languages: Gallo will speak Italian for his role of The Pusher and English for the part of the Sheriff.  The cast also includes Claudia Gerini as the Duchess, Fabrizio Gifuni as the Priest, and Elisa Sednaoui as the Psychic, with stage actress Silvia Calderoni taking on the title role of Kaspar Hauser.  As of this week the film is only slated to be released in Italy, but a North American release is highly likely.  Check out the brilliant teaser below which features an amazing track from Vitalic (to hear my favorite Vitalic song “Trahison” CLICK HERE) which I had never heard before, as well as a few UFOs to boot.  If you find yourself in Rotterdam be sure to check out The Legend Of Kaspar Hauser at the IFFR which runs from January 25th to February 5th.  To read more about Kaspar Hauser’s fascinating true story CLICK HERE.  For all things Vincent Gallo (including samples of his writing, art, photography, and music) be sure to check out his incredible website VincentGallo.com. 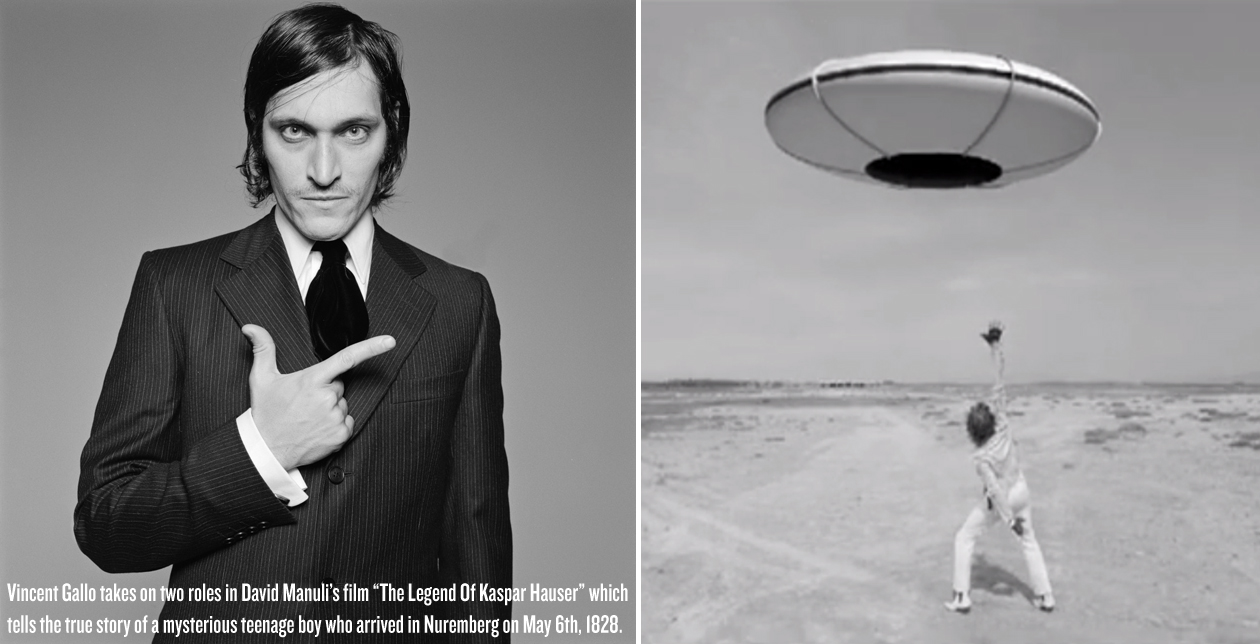