I remember when I was a 22-year-old student I was sharing a house with four friends to save money. Rent was about $225/month each person, but I had to share the very long (yet very short) attic space bedroom with my buddy Steve.  No worries, we saved a lot of cash.  The girls each got their own bedroom and we shared the bathroom, and it was never a problem.  The kitchen was big, we had our own backyard, and it was close to school.  It was a dump, so we were always having parties and didn’t really care if an extra dent or scratch popped up here and there.  The trade off was that the home was infested with silverfish (probably my number three most cringeworthy insect following close behind spiders at #2 and scorpions at #1).  The advantage of having the attic bedroom was that the silverfish got progressively smaller the higher up you moved through the house (about 1/2″ long in the attic and a freakish 3″ long in the basement).  No worries, we saved a lot of cash.

For one 22-year-old Russian student in New York, a living situation such as this is simply out of the question.  Why?  Because her daddy’s a billionaire Russian fertilizer tycoon who just purchased an apartment in New York for his little princess.  And it’s not just any apartment — it’s the most expensive in the city, coming in at $88 million.  I’m guessing the only silverfish to be found in her new home would be the silverware on which she eats her freshly caught sea bass flown in fresh from the Pacific Ocean on a private jet at her beck and call.  The floor below hers was also for sale, but with all the studying she has to do it would be too much of a hassle to renovate into a two-floor apartment so she didn’t buy it.  No worries, she saved a lot of cash.

The student’s name is Ekaterina Rybolovleva, and she’s the daughter of Dmitriy Rybolovlev, who made big money after the fall of the Soviet Union in the 1990s, when national resources were auctioned off — at often ridiculously low prices.  The four-bedroom penthouse, covering the length of a city block, is in one of the city’s ritziest buildings, constructed in 2007 at 15 Central Park West.  It has two wood-burning fireplaces and a library.  The two-towered Art Deco-style edifice even offers residents an art concierge and private wine cellars. The previous highest price for a New York home was paid by equity manager J. Christopher Flowers: $53 million for a Manhattan townhouse in 2006.  The record-setting penthouse is not the wealthy Russian family’s only U.S. treasure. Rybolovlev also bought Donald Trump’s mansion in Palm Beach, Florida, in 2008, for $95 million.  Rybolovlev, with a net worth estimated at $9.5 billion, is among the world’s 100 richest people. He sold the majority of his stake in the fertilizer business, Uralkali, for $6.5 billion last year.  For monthly taxes, maintenance fee, and more info CLICK HERE. 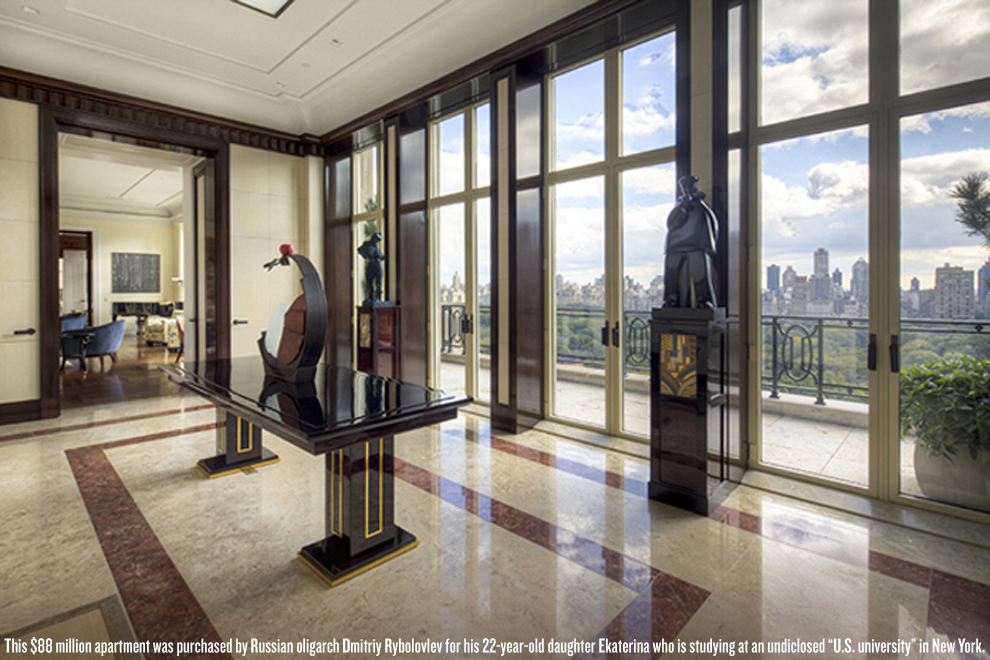 Previous post:
Details Emerge From Apple’s Top Secret Meetings With Media Executives Regarding The Future Of Television Next Post:
The Weeknd Releases 3rd Free Mixtape The Same Day I Fall In Love With Frank Ocean’s “Novacane”