Off Without A Hitch: Celebrating The Incredible Life And Mind Of Christopher Hitchens (1949-2011)

“In whatever kind of a ‘race’ life may be, I have very abruptly become a finalist.”  These were some of the last words written by Christopher Hitchens, one of the greatest writers, orators, intellectuals, and philosophers in the world.  Hitchens passed away last night at the M. D. Anderson Cancer Center in Houston where he was being treated for esophageal cancer, for which he had recently stopped treatment and entered hospice care. He was 62.

Famous for his love of Johnnie Walker Black and a bottomless pack of smokes, “Hitch”, as he was affectionately known, expressed no regrets for a lifetime of heavy smoking and drinking. “Writing is what’s important to me, and anything that helps me do that — or enhances and prolongs and deepens and sometimes intensifies argument and conversation — is worth it to me,” he told Charlie Rose in a television interview in 2010, adding that it was “impossible for me to imagine having my life without going to those parties, without having those late nights, without that second bottle.”  In another recent interview with Anderson Cooper, Hitchens remarked, “I burned the candle at both ends, and it gave a lovely light.”  Never one to apologize, Hitchens had built an incredible life for himself making one radical statement after another, although he would argue there’s nothing radical about clarity of thought.  And Christopher Hitchens made himself extremely clear.

Armed with a quick wit and a keen appetite for combat, Mr. Hitchens was in constant demand as a speaker on television, radio and the debating platform, where he held forth in a sonorous, plummily accented voice that seemed at odds with his disheveled appearance. He was a master of the extended peroration, peppered with literary allusions, and of the bright, off-the-cuff remark.  Mr. Hitchens, a British Trotskyite who had lost faith in the Socialist movement, spent much of his life wandering the globe and reporting on the world’s trouble spots for The Nation magazine, the British newsmagazine The New Statesman and other publications.  His work took him to Northern Ireland, Greece, Cyprus, Portugal, Spain and Argentina in the 1970s, generally to shine a light on the evil practices of entrenched dictators or the imperial machinations of the great powers.

After moving to the United States in 1981, he added American politics to his beat, writing a bimonthly “Minority Report” for The Nation. He wrote a monthly review-essay for The Atlantic and, as a carte-blanche columnist and Contributing Editor at VANITY FAIR, filed essays on topics as various as getting a Brazilian bikini wax and the experience of being waterboarded, a volunteer assignment that he called “very much more frightening though less painful than the bikini wax.” He was also a columnist for the online magazine Slate.  His support for the Iraq war sprang from a growing conviction that radical elements in the Islamic world posed a mortal danger to Western principles of political liberty and freedom of conscience. The first stirrings of that view came in 1989 with the Ayatollah Ruhollah Khomeini’s fatwah against the novelist Salman Rushdie for his supposedly blasphemous words in The Satanic Verses.  To Mr. Hitchens, the terrorist attacks of Sept. 11, 2001, confirmed the threat.

In his final years, he aimed his ammunition squarely at organized religion, and the absurdity of a world tearing itself apart over who has the better God.  His debates, essays, books, columns, and famous “Hitchslaps” will now be moved from the arm’s reach of his writing desk to the halls of history, and cement his place near the very top of the greatest minds of not only the past hundred years, but of all time.  “My chief consolation in this year of living dyingly has been the presence of friends,” Hitchens wrote this past June.  And this morning, one of his dearest friends, Stephen Fry, said: “Goodbye, Christopher Hitchens. You were envied, feared, adored, reviled and loved. Never ignored. Never bested. A great and marvellous man.”

Many of us live our mortal lives and merge with the infinite without leaving much to be remembered by.  Christopher Hitchens is not one of those people — his words, his ideas, and his mind will live on forever.  Never one to lose a battle, Hitchens has won the greatest one of all — immortality.  His life, one could say, went off without a Hitch.

UPDATE: CHARLIE ROSE PAID TRIBUTE THIS MORNING TO CHRISTOPHER HITCHENS WITH THIS RECENT INTERVIEW.  TO WATCH IT CLICK HERE, AND CLICK ON CHRISTOPHER’S IMAGE TO START THE VIDEO PLAYER. 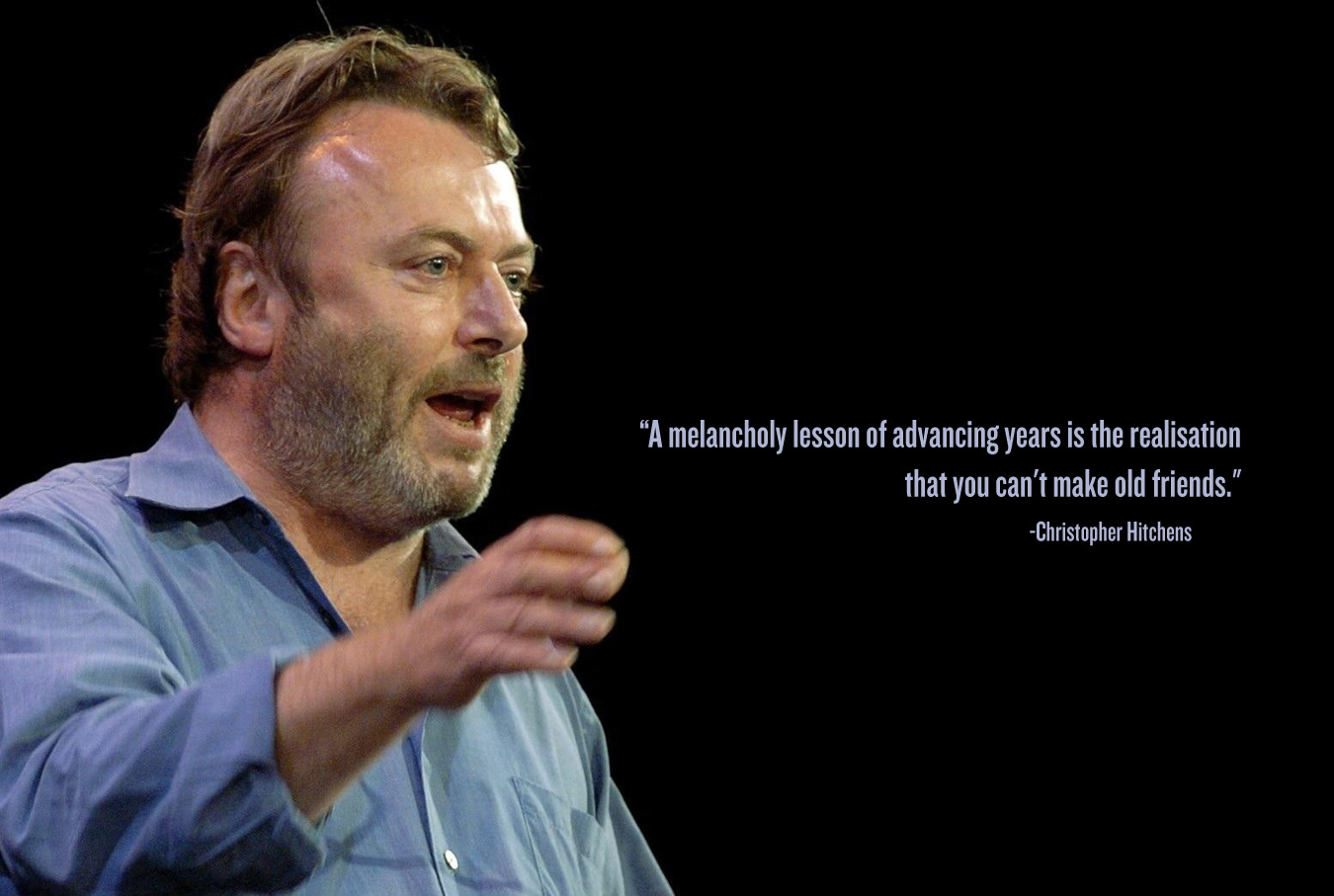