Christopher Hitchens just posted an announcement on his Facebook page that world-renowned biologist and best-selling author, Richard Dawkins, has been invited as Guest Editor of the Christmas edition of New Statesman.  For the 100-page special double issue, Dawkins brings together some of the world’s leading scientists, thinkers, and writers, including an in-depth full length interview with my hero — author, journalist, and Contributing Editor of VANITY FAIR, Christopher Hitchens — where they discuss religious fundamentalism, U.S. politics, Tony Blair, abortion and Christmas itself (to read all FEELguide posts related to the amazingness that is Christopher Hitchens CLICK HERE).  Microsoft’s Bill Gates has written a column on the wonders of innovation, the political theorist Alan Ryan has written on Barack Obama, and there are contributions from some of the world’s most respected scientists, including Paul Nurse, president of the Royal Society, and the space explorer Carolyn Porco, on Saturn.  With regards to the honor, Dawkins wrote:

“To guest-edit a great magazine with the status of a national treasure is the literary equivalent of being invited to imagine your ideal dinner party – Christmas dinner, in this case – and then of actually being allowed to send out real invitations to your dream companions. Every acceptance is like a present off the Christmas tree, gratefully unwrapped and treasured.  At the same time, I couldn’t help being daunted by the New Statesman’s historic reputation for serious, well-written radical commentary, and by the need in my literary Christmas dinner to temper merriment with gravitas.  We have no reindeer, but four horsemen; no single star of wonder and no astrologers bearing gifts, but a gifted star of astronomy who knows wonder when she sees it; no kings from the east, but the modern equivalent of a king from the west; and wise men – and women – all around the table. Please join us at the feast.”

In 2007, Dawkins, Hitchens, the philosopher Daniel Dennett and the neuroscientist Sam Harris (my other hero — to read all FEELguide posts related to Sam Harris CLICK HERE) were affectionately nicknamed the “Four Horsemen” of new atheism.  Both Dennett and Harris have written essays for this issue, on human loyalty and free will, respectively.  Other contributors to the special issue include the human rights activist Maryam Namazie, the comedian Tim Minchin and the rabbi and broadcaster Jonathan Romain.  Elsewhere in the magazine, the Poet Laureate, Carol Ann Duffy, speaks to the NS assistant editor Sophie Elmhirst about choosing morals over politics, reading poems at Occupy St Paul’s and her “Christmassy relationship” with God; Philip Pullman defends fairytales, and Kate Atkinson offers an exclusive short story, “Darktime”.

Jason Cowley, Editor of the New Statesmen writes: “Richard Dawkins is one of the world’s foremost public intellectuals, and has revived long-dormant debates on the role of both religion and science in public life. We are delighted that he has illuminated both issues in this special Christmas double issue of the ‘New Statesman’.  He has assembled some exceptional writers and thinkers, and we’re particularly pleased to welcome back Christopher Hitchens, who began his Fleet Street career on the NS in the 1970s.”  The issue, cover-dated December 19th, will go on sale in London on Tuesday, December 13th, and in the rest of the world on Wednesday, December 14th. Buyers can also obtain single-issue copies via New Statesman. 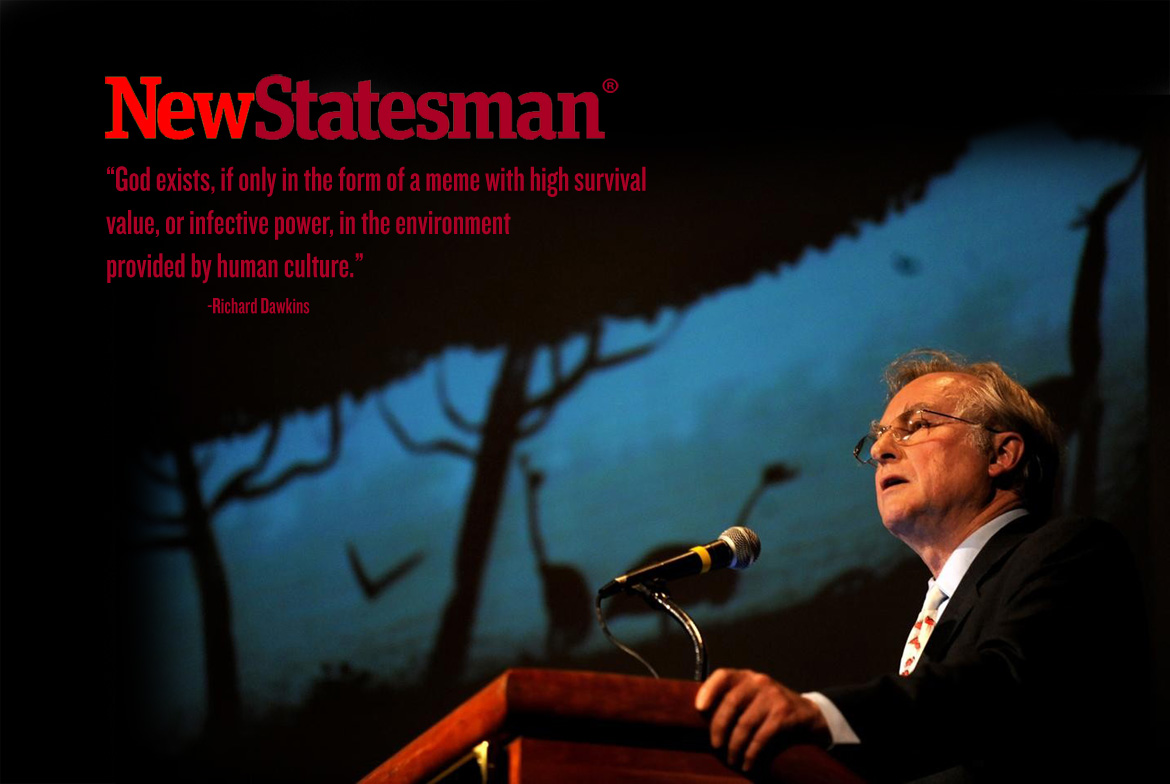