First published in The Wall Street Journal (November 21, 2011) by P. Caddell and D. Schoen  ☛ When Harry Truman and Lyndon Johnson accepted the reality that they could not effectively govern the nation if they sought re-election to the White House, both men took the moral high ground and decided against running for a new term as president. President Obama is facing a similar reality—and he must reach the same conclusion.  He should abandon his candidacy for re-election in favor of a clear alternative, one capable not only of saving the Democratic Party, but more important, of governing effectively and in a way that preserves the most important of the president’s accomplishments. He should step aside for the one candidate who would become, by acclamation, the nominee of the Democratic Party: Secretary of State Hillary Clinton.

Never before has there been such an obvious potential successor—one who has been a loyal and effective member of the president’s administration, who has the stature to take on the office, and who is the only leader capable of uniting the country around a bipartisan economic and foreign policy.  Certainly, Mr. Obama could still win re-election in 2012. Even with his all-time low job approval ratings (and even worse ratings on handling the economy) the president could eke out a victory in November. But the kind of campaign required for the president’s political survival would make it almost impossible for him to govern—not only during the campaign, but throughout a second term.  Put simply, it seems that the White House has concluded that if the president cannot run on his record, he will need to wage the most negative campaign in history to stand any chance. With his job approval ratings below 45% overall and below 40% on the economy, the president cannot affirmatively make the case that voters are better off now than they were four years ago. He—like everyone else—knows that they are worse off. 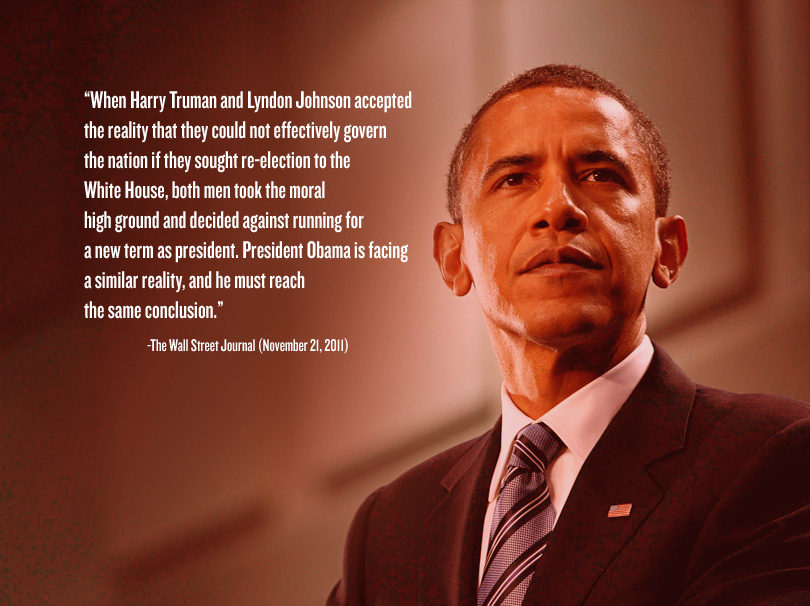 President Obama is now neck and neck with a generic Republican challenger in the latest Real Clear Politics 2012 General Election Average (43.8%-43.%). Meanwhile, voters disapprove of the president’s performance 49%-41% in the most recent Gallup survey, and 63% of voters disapprove of his handling of the economy, according to the most recent CNN/ORC poll.  Consequently, he has to make the case that the Republicans, who have garnered even lower ratings in the polls for their unwillingness to compromise and settle for gridlock, represent a more risky and dangerous choice than the current administration—an argument he’s clearly begun to articulate.  One year ago in these pages, we warned that if President Obama continued down his overly partisan road, the nation would be “guaranteed two years of political gridlock at a time when we can ill afford it.” The result has been exactly as we predicted: stalemate in Washington, fights over the debt ceiling, an inability to tackle the debt and deficit, and paralysis exacerbating market turmoil and economic decline.  If President Obama were to withdraw, he would put great pressure on the Republicans to come to the table and negotiate—especially if the president singularly focused in the way we have suggested on the economy, job creation, and debt and deficit reduction. By taking himself out of the campaign, he would change the dynamic from who is more to blame—George W. Bush or Barack Obama?—to a more constructive dialogue about our nation’s future.

Even though Mrs. Clinton has expressed no interest in running, and we have no information to suggest that she is running any sort of stealth campaign, it is clear that she commands majority support throughout the country. A CNN/ORC poll released in late September had Mrs. Clinton’s approval rating at an all-time high of 69%—even better than when she was the nation’s first lady. Meanwhile, a TIME Magazine poll shows that Mrs. Clinton is favored over former Massachusetts Gov. Mitt Romney by 17 points (55%-38%), and Texas Gov. Rick Perry by 26 points (58%-32%).  But this is about more than electoral politics. Not only is Mrs. Clinton better positioned to win in 2012 than Mr. Obama, but she is better positioned to govern if she does. Given her strong public support, she has the ability to step above partisan politics, reach out to Republicans, change the dialogue, and break the gridlock in Washington. 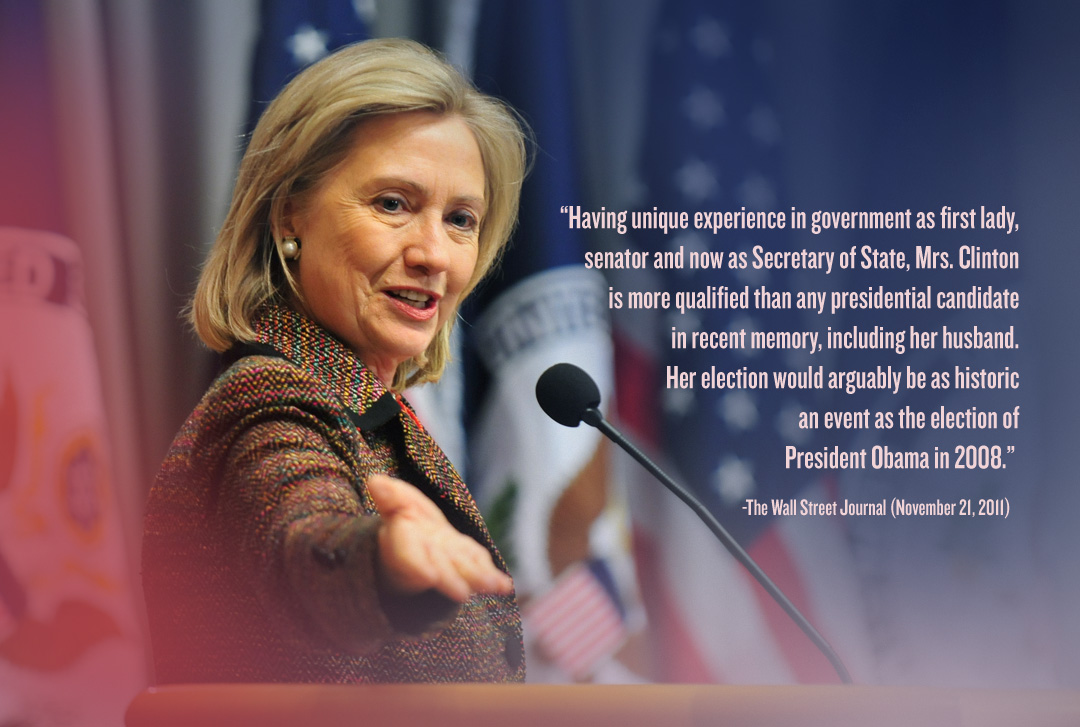 President Bill Clinton reached a historic agreement with the Republicans in 1997 that led to a balanced budget. Were Mrs. Clinton to become the Democratic nominee, her argument would almost certainly have to be about reconciliation and about an overarching deal to rein in the federal deficit. She will understand implicitly the need to draw up a bipartisan plan with elements similar to her husband’s in the mid-to-late ’90s—entitlement reform, reform of the Defense Department, reining in spending, all the while working to preserve the country’s social safety net. Having unique experience in government as first lady, senator and now as Secretary of State, Mrs. Clinton is more qualified than any presidential candidate in recent memory, including her husband. Her election would arguably be as historic an event as the election of President Obama in 2008.

By going down the re-election road and into partisan mode, the president has effectively guaranteed that the remainder of his term will be marred by the resentment and division that have eroded our national identity, common purpose, and most of all, our economic strength. If he continues on this course it is certain that the 2012 campaign will exacerbate the divisions in our country and weaken our national identity to such a degree that the scorched-earth campaign that President George W. Bush ran in the 2002 midterms and the 2004 presidential election will pale in comparison.  We write as patriots and Democrats—concerned about the fate of our party and, most of all, our country. We do not write as people who have been in contact with Mrs. Clinton or her political operation. Nor would we expect to be directly involved in any Clinton campaign.

If President Obama is not willing to seize the moral high ground and step aside, then the two Democratic leaders in Congress, Sen. Harry Reid and Rep. Nancy Pelosi, must urge the president not to seek re-election—for the good of the party and most of all for the good of the country. And they must present the only clear alternative—Hillary Clinton.

Previous post:
Background Photo #2 Next Post:
Listen To New Music From AIR, Including Score For 1902 Film “A Trip To The Moon” And Cartier Short