Within hours of its release, the trailer for Tarsem Singh’s take on the beloved fairtytale Snow White had already been met with a backlash from a huge number of majorly disappointed critics.  The Playlist writes: “Visually, this has to be one of Tarsem’s weakest efforts, with the plastic looking sets, watercolor backgrounds and (minimal) effects certainly pointing to a movie that is rushing to meet a spring release date.  This kind of looks awful, but maybe this is a future fairy tale ‘Showgirls’ that will prompt drinking games and post-release appreciation by high falutin’ cinephiles trying to justify a trainwreck with academic language. So which movie will be the fairest of them all next year? Not this one.”

And the editor of Dlisted was equally turned off in his column “Mirror, Mirror, Who’s Got The Shittiest Snow White Of Them All?” where he wrote: “The rest of the trailer for ‘Mirror, Mirror’ tells me that if I’m ever going to see this mess in full, I better smoke the wrong stuff out of an apple bong beforehand.  All nerves will have to be numbed to deal with Julia’s face acrobats and her signature horse cackle that still sounds like Woody Woodpecker getting ass-f@#%ed without lube on a seesaw.  Can’t we pluck (not punned on purpose) Brow White from this movie and throw her into the one with Charlize Theron? Then we can stick this mess into ABC Family right between a PSA on cyber bullying and a tampon commercial.”

An equally turned-off Jenna Busch writes in her column “Mirror, Mirror Makes Us Hate Fairytales”: “When the trailer for the first of the two upcoming Snow White movies, ‘Snow White and the Huntsman’ was released, the buzz was pretty fantastic.  From the melting magic mirror to Kristen Stewart’s armor, the first reviews to hit the net were very positive.  Not so with the second offering from director Tarsem Singh, ‘Mirror Mirror’.  Starring Julia Roberts as a kind of dopey, supposed-to-be-funny Evil Queen, a dippy sounding Lilly Collins as Snow White and the normally great Armie Hammer as the Prince, this film is obviously meant for kids. But even the small set aren’t going to like anything more than the costumes.” 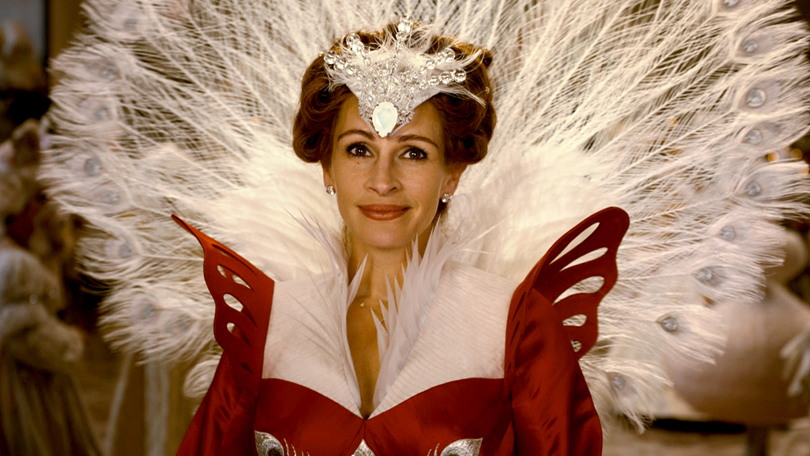 Previous post:
Listen To Eckhart Tolle’s Inspiring Thoughts On The Expansion Of Spirituality And The Implosion Of Dogmatic Religions Next Post:
Halls New Track “I Am Not Who You Want” Is Blowing My Mind (And The Video Is Pretty Damn Amazing Too)