North American Pine Forests Being Annihilated By The Bark Beetle, Area The Size Of England Destroyed In B.C. Alone

My father, as well as most of my cousins and uncles work in the logging industry of Ontario.  I grew up on my dad’s sawmill and would spend my weekends and summers working in the mill, and the rest of my time wandering the massive forests of the Ottawa Valley where I grew up.  I feel I have a more intimate connection with forests than the average person, as logging is part of my family’s DNA and most of youth was spent in the trees.  It was also this upbringing that provided me years ago with my first warning of the biggest threat to North America’s forests: the bark beetle.  Much like the alien in Ridley Scott’s sci-fi epic, the bark beetle is quite simply indestructible.  My family first learned of the bark beetle invasion back in the early 90s and although it was a terrifying scenario, at least back then we could take comfort in the fact that the worst was still far off in the future.  Sadly, in 2011 we’ve arrived in the grim, dead center of this future.

Bark beetle infestations have been a source of devastation for centuries.  When Europe’s hardwood forests were replaced by fast-growing spruce and pine from the 14th century onwards, the bark beetle became a huge problem, often causing wood famines and fuel shortages.  The concept of defensive clear-cutting was first introduced in Europe in 1787, but this only had minimal effect on curtailing the beetles’ spread.  When the bark beetle first arrived in North America in the early 1990s it popped up in Alaska.  Normally a cold and wet place, the state’s average December temperature had already skyrocketed between 3°C and 4 °C by that point.  It was enough of a change that the beetle’s life cycle switched from two years to one year.  This was the beginning of the end because it poured such an enormous amount of extra beetles into the landscape.  Fast forward to today and the bark beetle has destroyed 10,000km2 of Alaska’s forests, 8000km2 of New Mexico’s forests, a whopping 130,000km2 of British Columbia’s forests (the size of England), and every single day in the forests of Colorado and Wyoming 100,000 beetle-killed lodgepole pines crack and fall to their deaths.

What’s worse is that scientists are watching the beetles’ behavior change in completely unpredictable ways.  For the first time ever, scientists are seeing bark beetles attack and kill even young trees — something that has never been witnessed before.  There are even more species of bark beetles than than there are species of mammals on the entire planet.  Today’s count tallies the number of bark beetle species at 7,500.  Their accelerated development and appetite is matched only by their accelerated mutation: these beetles are now beginning to develop a taste for spruce trees.  It appears now that no conifer is safe.  There is no other creature on earth that is capable of devastating landscapes this huge this fast, and the bark beetle is the biggest threat to the North American ecosystem by a vast margin, and we are essentially defenseless.  It appears as if our last resort may come from Mother Nature herself who will undoubtedly need to get out her flame thrower a-la Siguorney Weaver-style and burn down the dead swaths of forests in order to bring them back to life and kill the predators once and for all.  “Get away from here you BITCH!”  To read the entire fascinating article which chronicles the history of the bark beetle, the various methods man has used through the centuries to try and control the epidemics, and what the future holds, be sure to visit New Scientist. 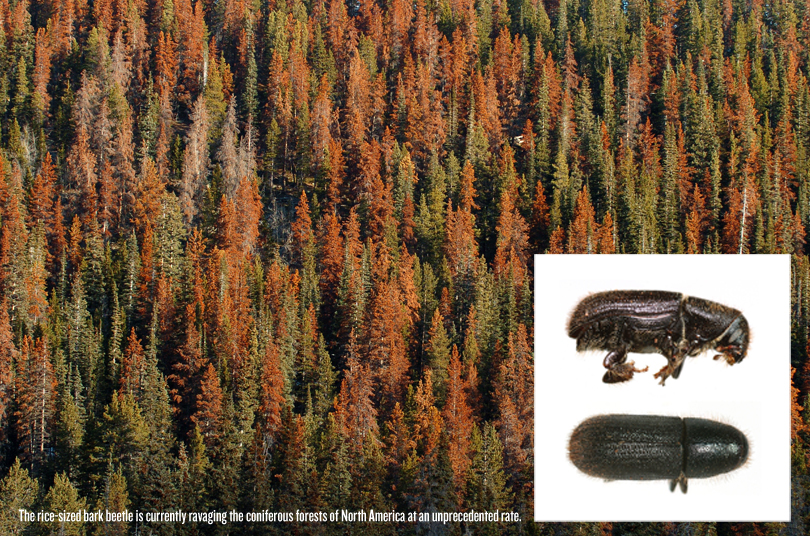