VARIETY broke the news yesterday about the hugely successful distribution deals that are currently being brokered for screenwriter and producer Rodrigo Cortes and producer Adrian Guerra‘s latest film Emergo.  The story follows a team of high-tech parapsychologists who investigate mysterious phenomena in an old, eerie house.  The following is the film’s official synopsis: “A team of parapsychologists sets out to investigate a series of anomalous phenomena taking place in a newly occupied apartment.  Telephone calls with no caller, mysterious shadows, extraordinary light emissions, flying objects, and exploding light bulbs, are some of the events they will face while recording their every step with state-of-the-art technology. Using infra-red filming, digital photography, psychophonic recordings, movement detectors, and magnetic field alteration meters, the group’s attempts to contact the “other side” will grow increasingly dangerous as they near a point of no return.”

The filmmakers describe the movie as a love letter to the two films which broke the most ground in the genre they love so much: The Blair Witch Project and REC.  What has so many execs excited is the directors’ fresh, unique usage of multiple cameras, “ranging from HD lensing to 8mm, 16mm and 35mm used to capture the scientists’ state-of the-art technology — infra-red filming, psychophonic recordings, movement detectors and magnetic field alteration meters — plus the chilling phenomena they detect.”  The film’s biggest deal to date has been its sale to Alliance for Canadian and UK release.  The team has also secured distribution rights for Mexico (Cine Video y TV), Taiwan (Studio Solutions Group), the Middle East (Gulf Film), Singapore (Cathay Keris Films), Indonesia (P.T. Rapi Films), the Philippines (Pioneer Films), Argentina and Venezuela (Eastwood Holdings International).  A major U.S. deal is currently in the works, but VARIETY did not speculate on exactly which company won the rights.  Rodrigo Cortes and Adrian Guerra are the seam team behind “Buried” and “Red Lights”.  Emergo was written by Cortes, and marks the feature film debut of award-winning Catalan short-film director Carles Torrens.

Parapsychology is the study of a number of ostensible paranormal phenomena including: telepathy, precognition, clairvoyance, psychokinesis, near-death experiences, reincarnation, and apparitional experiences.  The term parapsychology was first coined in or around 1889 by philosopher Max Dessoir.  To learn more about the history of parapsychological research be sure to visit Wikipedia. 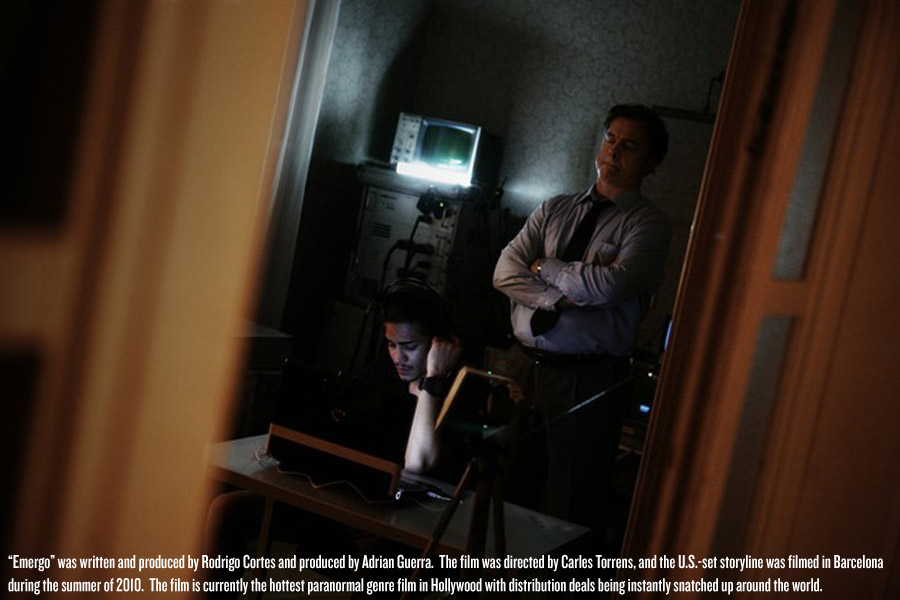 Previous post:
Listen To The Brand New Remixes From Patten’s Groundbreaking New Album “GLAQJO XAACSSO” Next Post:
Niall Ferguson Looks At The History Of Western Dominance And Its Potential Collapse In His Latest Book “Civilization”