One of the toughest battles in Hollywood right now is which of the three upcoming versions of Snow White will hit the screens first.  All three have a completely different spin on the tale but in Hollywood, the first one out gets the bulk of the cash and nearly all of the buzz.  Now it appears as if there’s another similar 3-way race brewing in Tinseltown, this time involving the life story of Princess Diana.

News broke of the first two productions just over a year ago.  The first from producer Stephen Evans entitled Princess Diana: Closely Guarded Secret written by Diana’s lifelong bodyguard Ken Wharfe.  The budget is hovering around $30 million with Charlize Theron and Ewan McGregor speculated the star.  The second film in the works is being built by Pathé Films with Keira Knightley rumored to play Lady Di and Dame Judy Dench being courted to play the Queen Mother.  Well, as of this morning this race just got a hell of a lot more interesting with the announcement of a third biopic of Princess Diana getting started.  Written by Steven Jeffreys (The Libertine), this highly controversial take on the life of the People’s Princess is entitled Caught In Flight and will star none other than Jessica Chastain, the most exciting actress to come out of Hollywood in years.  The story will focus on Diana’s affair with Dr. Hasnat Kahn that lasted from 1995 until a few months before she died in 1997.  From inside accounts, Khan was the absolute love of her life, and she was apparently devastated when the love affair ended.  Some people close to the situation feel that Diana dated Harrod’s department store heir Dodi Fayed as a way of making Kahn jealous.

Oliver Hirschbiegel (Downfall, Das Experiement) is directing, and the film is already in pre-production.  Shooting kicks off in March with locations including Pakistan, Angola, the South of France, and Paris.  Chastain adds Caught In Flight to an impressively diverse set of roles in 2011 ranging from a stoic 1950s mother in Terrence Malick’s Tree Of Life, to a small town Texas wife dealing with her husband’s mental illness in Take Shelter.  We can also look forward to seeing Chastain in the upcoming science fiction film Horizons as well as the Guillermo Del Toro-produced horror pic Mama.  Very interesting indeed.  For all FEELguide posts related to Jessica Chastain CLICK HERE.

SEE ALSO: “WONDERLAND” Magazine Discovers 5 Things We Never Knew About The Amazingness That Is Jessica Chastain 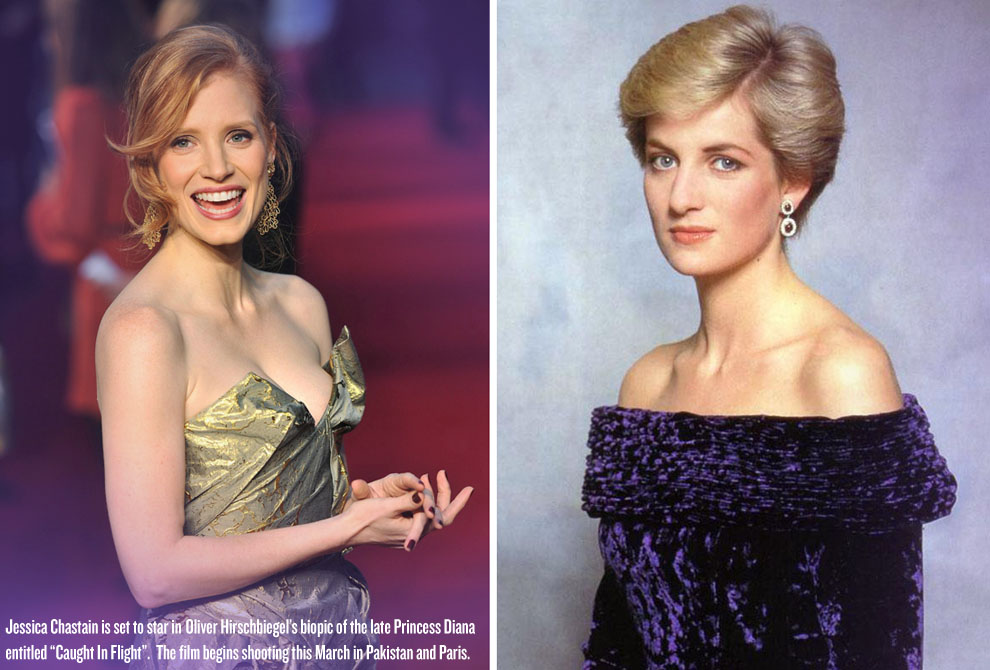