The New York Times Takes An In Depth Look At Steven Spielberg’s Inner Circle, His Career, And What Makes Him Tick

Once I started reading The New York Times‘ recent profile of Steven Spielberg I couldn’t stop.  The man is a force of nature as far as I’m concerned, and few people alive have done more to shape our world’s collective popular culture.  In the feature profile written by Michael Cieply, we get a rare inside glimpse at the staggering life work that Spielberg has built for himself, and how his professional life is structured.  Cieply talks not only to the director himself, but also to those closest to him, such as his long-time producer Kathleen Kennedy, and his long-time close friend and composer John Williams.  The following is an excerpt from the feature:

… Still, the line between art and commerce can be a scary place. Time and again Mr. Spielberg has held the audience in the palm of his hand. Now 64, he is not simply the best-selling film director of all time; his domestic ticket sales, at about $3.8 billion, roughly match the combined sales of his next two rivals, Robert Zemeckis and James Cameron. If Hollywood had a Mount Rushmore, Mr. Spielberg would get two heads.

… The movies have come on top of television ventures that have included Terra Nova, the time-travel series he has produced in partnership with Peter Chernin for Fox, along with “Falling Skies” for TNT, The River for ABC and Smash, for NBC. It is a pace that startles even Kathleen Kennedy, a producer of The Adventures of Tintin, War Horse and Lincoln, who has worked with Mr. Spielberg for more than 30 years.  “He’s often choosing for emotional reasons,” Ms. Kennedy said of decisions that helped add Mr. Spielberg’s three directing assignments to an already large stack of productions. “I do think that plays a role in what he chooses to do.”

… For those who wonder what drives him (money is no object: The Los Angeles Business Journal recently listed him as this city’s eighth richest person, with a net worth estimated at $3.2 billion), Mr. Spielberg has left clues. Perhaps the most telling was tucked away last year in the teacher’s guide to the Smithsonian American Art Museum’s exhibition of Norman Rockwell works from the collections of Mr. Spielberg and George Lucas.  In the guide Mr. Spielberg discusses the painting “Boy on High Dive,” in which a boy crouches on the end of a diving board, looking fretfully over the edge. “For me, that picture represents every motion picture just before I commit to directing it — just that one moment,” he says of a work that has long hung in his Amblin Entertainment office at Universal Studios.

You can read the full feature profile of Steven Spielberg entitled “What Makes Spielberg jump?” by visiting The New York Times.  The article also explains that Spielberg has recently achieved something that perhaps no one else in Hollywood could possibly pull off.  His two upcoming films, Tintin and War Horse, are each being released by competing studios, but Spielberg has somehow convinced them to release both competing films within days of eachother.  Tintin on December 21st, and War Horse on December 25th.  Looking forward to seeing both! 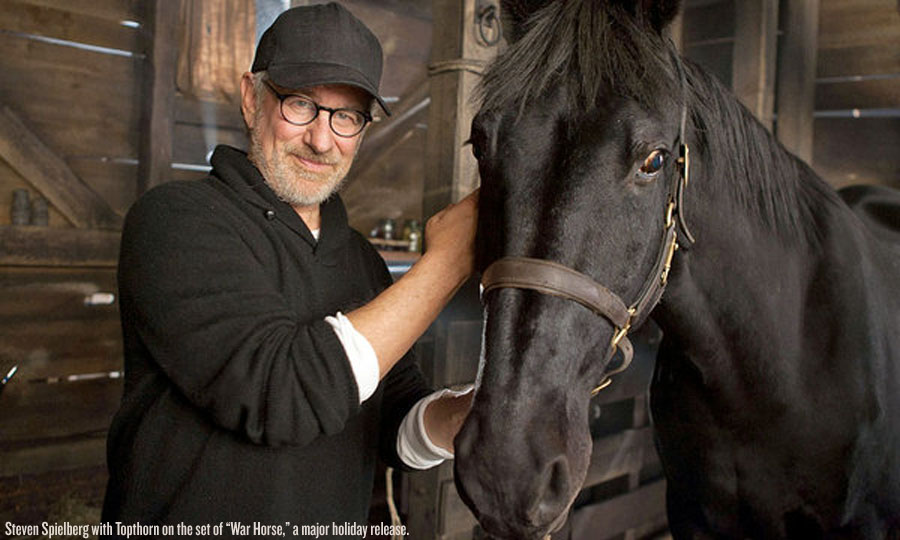 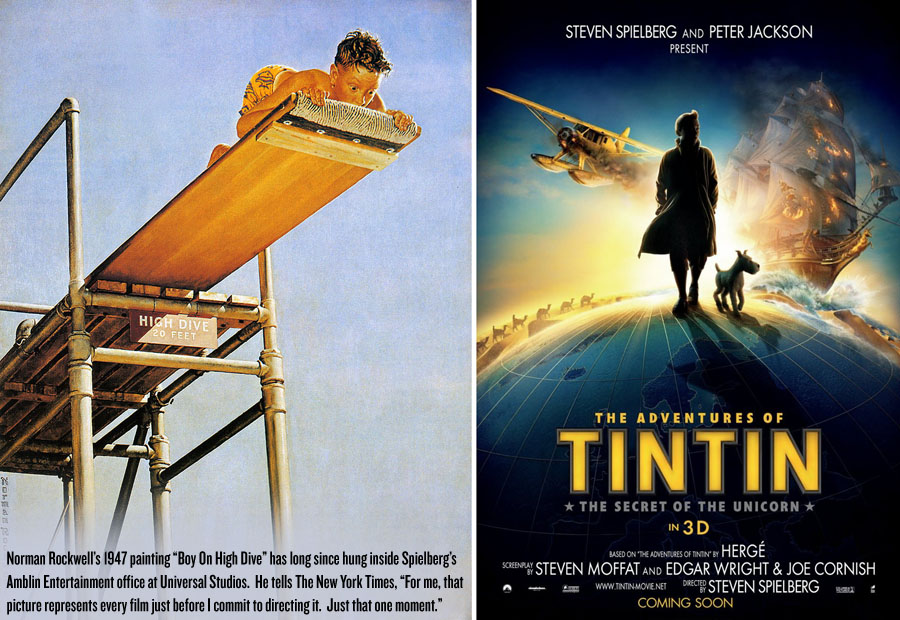