Ti West is easily the most exciting new horror film director in the industry today.  Born on October 5, 1980 in Delaware, West pretty much blew the roof off the genre with his bone-chilling (and pant-shitting) film The House Of The Devil in 2009, and looks like he’s set to do the same with his upcoming highly anticipated new film The Innkeepers.  Starring Kelly McGillis, Sara Paxton, and Pat Healy, the film takes place in an old New England hotel where the living are not the only people to be found inside:

After over one hundred years of service, The Yankee Pedlar Inn is shutting its doors for good. The last remaining employees -Claire (Sara Paxton) and Luke (Pat Healy) – are determined to uncover proof of what many believe to be one of New England’s most haunted hotels. As the Inn’s final days draw near, odd guests check in as the pair of minimum wage “ghost hunters” begin to experience strange and alarming events that may ultimately cause them to be mere footnotes in the hotel’s long unexplained history.

Ti West sat down with The New York Times for a terrific capsule interview this past March when The Innkeepers debuted to huge success at this year’s SXSW Film Festival (Cinematical was lucky enough to get a seat and in their review they praised the film as “radiant with inspiration.”  Director Eli Roth also called it “one of the best, smartest, and scariest” indie horrors he’s seen ages.)  I loved hearing his thoughts on the layering of time in the decor and the storyline, as well as how he always has to be one step ahead of the post modern horror audience in order to keep them engaged with his films.  I’ve attached the interview below as well as the brand new poster for the film that was released this week via Entertainment Weekly.  And if you haven’t yet seen his brilliant love letter to 70s/80s horror, The House Of The Devil, well, I’m jealous — because you’re in for one hell of a ride.  See below for a small taste of what to expect.  The Innkeepers is being released by MAGNET on VOD December 30th, and hits theaters on February 3rd.  UPDATE: THE FIRST TRAILER FOR “THE INNKEEPERS” WAS JUST RELEASED THIS MORNING.  I’VE ATTACHED A YOUTUBE COPY BELOW, BUT IT WILL LIKELY GET PULLED DOWN QUICKLY.  IF SO, YOU CAN ALWAYS WATCH THE TRAILER AT APPLE BY CLICKING HERE. 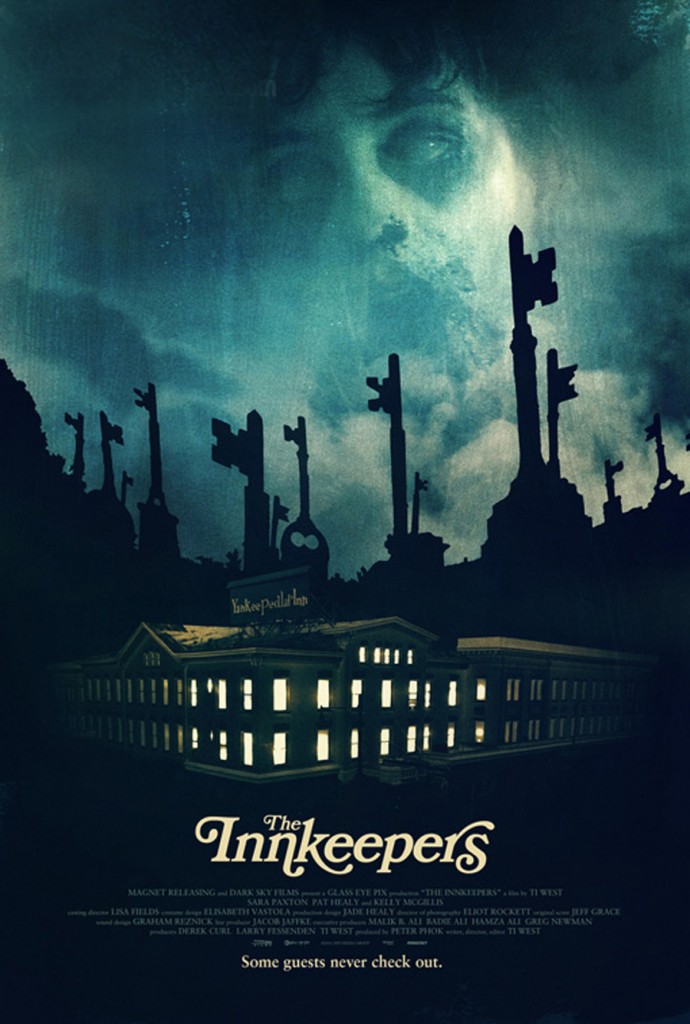