First published in the October 2011 edition of VANITY FAIR by Christopher Hitchens (originally entitled “V.F. Portrait: Joan Didion”)..☛. Like the experience of warfare, the endurance of grave or terminal illness involves long periods of tedium and anxiety, punctuated by briefer interludes of stark terror and pain. This endurance need not necessarily be one’s own: indeed, the experience of watching over a sibling or mate in extremis can be even more acute. But nothing, according to the experts, compares to the clutching, choking nightmare that engulfs the one who is slowly bereft of a child.

It is horrible to see oneself die without children.  Napoléon Bonaparte said that.
What greater grief can there be for mortals than to see their children dead.  Euripides said that.
When we talk about mortality we are talking about our children.  I said that.

Joan Didion, here slightly syncopating in the Bob Dylan manner, has striven with intense dignity and courage in Blue Nights to deepen and extend the effect of The Year of Magical Thinking,her 2005 narrative of the near-simultaneous sudden death of her husband, John Gregory Dunne, and the onset of the fatal illness of their daughter, Quintana Roo Dunne Michael. In the course of setting it down, she came to realize that she could no longer compose in the old style: the one that she had “supposed to be like writing music.”

And what kind of music could this have been, except the Blues? But blue is more than the shade of a symphony. It is where the “bolt” comes from, as Didion mordantly notes. It can register the transit of an entire evening, from the first, faint translucent gloaming to the near-inky cerulean black.  The long day wanes along a spectrum of blue. So did the short life of the keen, merry girl, who wasn’t too spoiled by showbiz or room service, who shrewdly opposed her mother’s choice of poem at her father’s memorial service. And whose solemn recommendation about death was “Don’t dwell on it.” That last choice is not available to her mother:

Vanish.
Pass into nothingness: the Keats line that frightened her.
Fade as the blue nights fade, go as the brightness goes.
Go back into the blue.
I myself placed her ashes in the wall.
I myself saw the cathedral doors locked at six.
I know what it is I am now experiencing.
I know what the frailty is, I know what the fear is.
The fear is not for what is lost.
What is lost is already in the wall.
What is lost is already behind the locked doors.
The fear is for what is still to be lost.
You may see nothing still to be lost.
Yet there is no day in her life on which I do not see her.

In this supremely tender work of memory, Didion is paradoxically insistent that as long as one person is condemned to remember, there can still be pain and loss and anguish.

(NOTE: ‘Blue Nights’ will be released by Knopf on November 1, 2011.  For more discoveries like the one above, be sure to visit VANITYFAIR.com.  For more information on ‘Blue Nights’ you can read the following FEELguide feature: “Joan Didion’s Next Book “Blue Nights” Has The Entire World Waiting In Breathless Anticipation“). 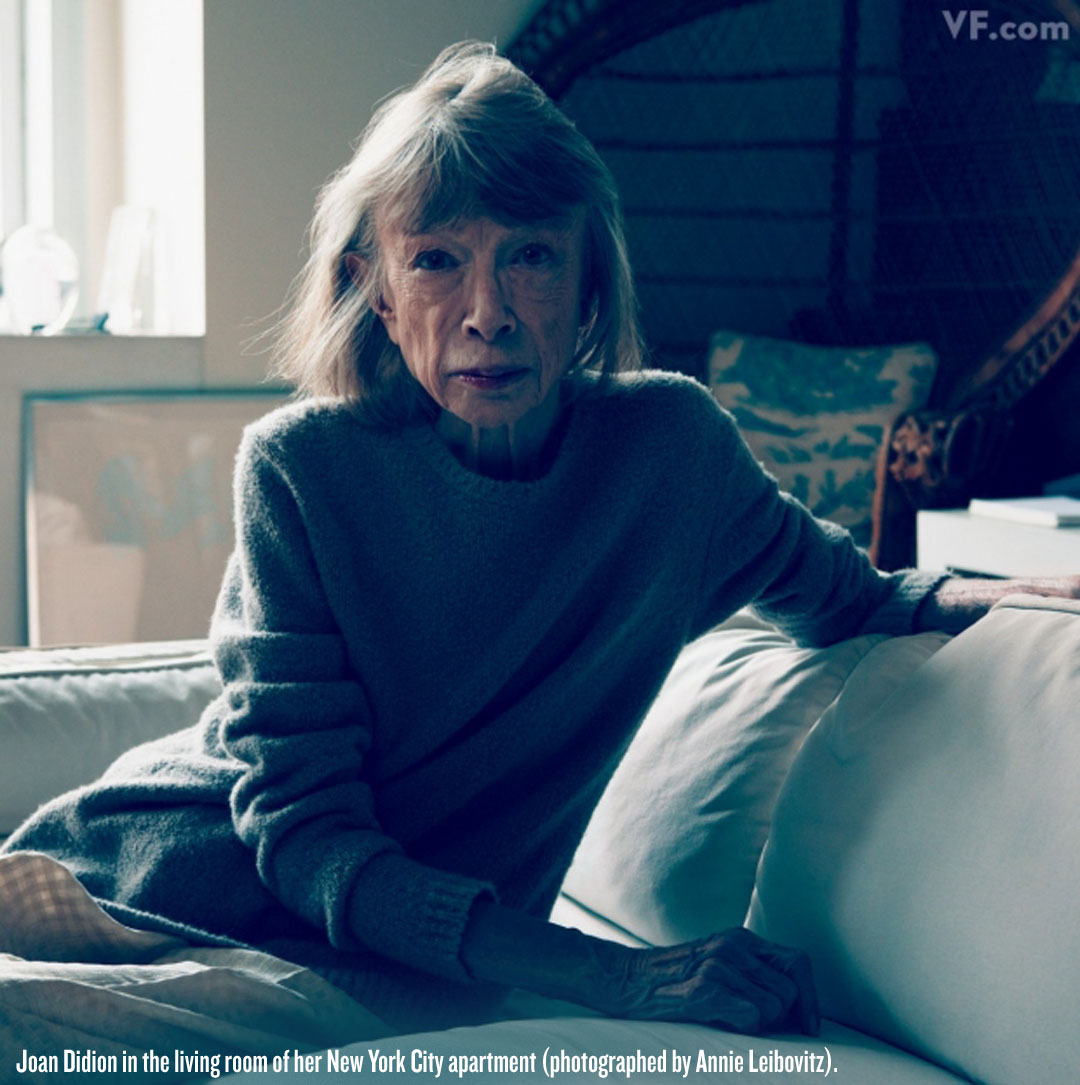 Previous post:
Bill Clinton Sits Down With Matt Lauer With His Answers On How To Fix The God Awful American Economy Next Post:
If This Photo Gallery Doesn’t Get You All Warm And Fuzzy For Fall Then Nothing Will