Every time I hear Michele Bachmann open her mouth I react in much the same way as that German shepherd did in the trailer for Paranormal Activity 3 — my hair stands up, I start to growl, and I become fiercely protective.  Yet so many people out there don’t even seem to notice the Bachmann threat.  This past weekend, the Minnesota congresswoman won the Iowa Straw Poll, the first critical litmus test of GOP presidential candidacy which weeds out the weak from the strong.  The very same day, Texas Governor Rick Perry announced he was throwing his hat in the ring as well.  Both headlines broke less than 3 hours apart Sunday morning, so needless to say, Sunday was a very sad day for America indeed.

The news almost certainly sent America’s Founding Fathers turning in their graves, because it represented a slap in the face to something that they fought tooth-and-nail to stitch into the DNA of the American Constitution: the separation of Church and State (to learn more about the First Amendment to the Constitution of the United States CLICK HERE).  As Christopher Hitchens once pointed out, Christian America is nothing but an illusion when you consider the fact that more than 2/3 of the United States claims to be devout Christians, yet American churches are 80% empty from coast to coast.  Hypocrisy doesn’t get much bigger than this, folks.  Yet for some reason, however, the President of the United States still has to go to church every Sunday.  The Founding Fathers, especially Jefferson, knew how essential a democracy’s health is in regards to its ability to keep the influence of the Church outside of the halls of government, yet in 2011 this seems to be falling on deaf ears.

As a matter of fact, Rick Perry recently led 30,000 evangelical followers in prayer when they assembled in Houston’s Reliant stadium for a seven-hour marathon which blended Christian Revivalism with hard-headed electoral campaigning.  Yes, ladies and gentlemen, that sound you hear is the spirit of Thomas Jefferson screaming “Nooooooooooooooo!!!”   And Michele Bachmann is even worse. Lots of politicians talk about a sinister homosexual agenda, but Bachmann — who has made opposition to gay rights a cornerstone of her career — seems genuinely to believe in one. Her conviction trumps even her once close relationship with her lesbian stepsister, whom she has removed from her life.  Bachmann has also made it very clear she plans on reinstating the Don’t Ask Don’t Tell policy which effectively makes it illegal to be gay in the U.S. military.  And her opposition to gay rights is just the tip of her dogmatic iceberg.  There’s a whole lot more where this comes from, and you can be sure she will be the first President to erect a 30-foot tall cross on the South Lawn of The White House should — God forbid — she ever get elected.

We have found ourselves living in a world where religious dogma has fractured almost the entire human race into polarized corners, each willing to kill one another in order to prove who is more “enlightened”.  Conflicting religious dogmas make up the greatest threat to civilization we have ever known, and Thomas Jefferson and his fellow Founding Fathers understood this as plain as day almost 250 years ago.  It is terribly sad how America is completely ignoring the wisdom of these great minds who realized long ago from lessons learned in Europe that mixing religion and government is simply never an option.

SEE ALSO: Christopher Hitchens Doesn’t Hold Back On His Views Of The Catholic Church
SEE ALSO: The Net Worth Of Every American President, From Washington To Obama
SEE ALSO: The Atlantic Takes A Fascinating Look At Thomas Jefferson’s Personally-Edited Bible And The Complexities Behind Its Smithsonian Preservation 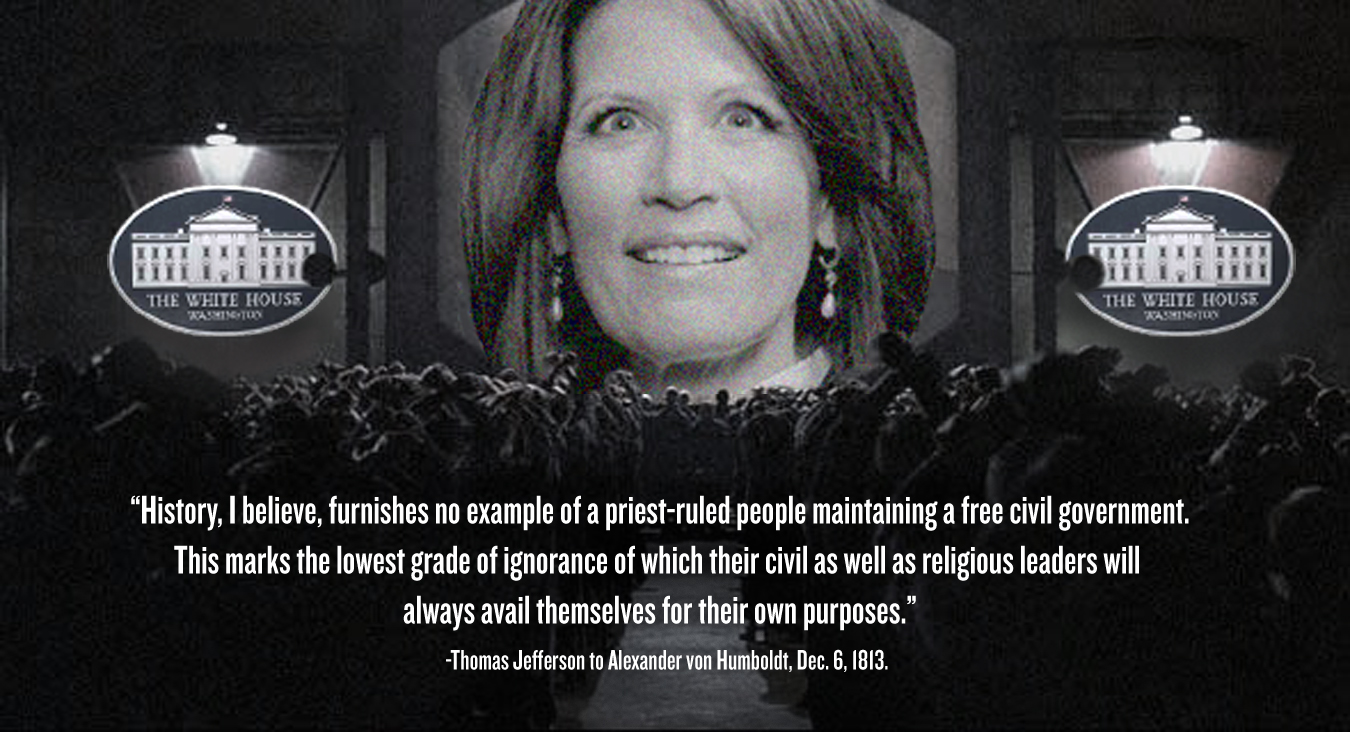