This coming Halloween will mark the 10th anniversary of my big move to Montreal, and if there’s one thing I’ve learned over the past decade it’s how this city takes about the same amount of care of its infrastructure as a crack-addicted mother takes care of her newborn baby.  It’s difficult to even know where to begin making the list of examples of how this city’s infrastructure is crumbling apart like a sand sculpture in a rain storm, but a good place to start would be the roads.

Every March like clockwork the pothole craters begin to emerge.  And I’m not talking about your typical pothole — the ones in Montreal are so enormous that about four months ago a driver here was cruising along and the entire front end of his car drove into a massive fucking hole that nearly killed him.  No joke.  Then there are the overpasses which are so perilously close to collapse due to poor (if any) inspection oversight that one of them indeed did fall down about five years ago killing five people and critically injuring six more.  And then there’s the Champlain Bridge.  Opened in 1962, the bridge is not only the most used bridge in Canada, it’s also the most dangerous.  Last night I was watching a CBC News story about how a federal report on the state of the bridge was prevented from being released to the public because the conclusions were too terrifying.  The reporter opened her story by hopping into a gentleman’s car, an engineering professor who works downtown, and following him on his morning commute.  Part of this man’s morning ritual is to say a long elaborate prayer each morning when he crosses as well as each evening when uses it to return home.  Bridges such as the Champlain Bridge fall under the jurisdiction of the federal government and it mystifies me how it is even allowed to remain open at this point.  Dear Feds: shut the damn thing down right now before something tragic happens.  From my own experience with engineers through the years I’ve learned that all structures are built to be a factor of 16 times stronger than they need be.  But when something like a giant bridge that transports thousands of people every day is down to a factor of one, it’s time to close it.  I realize the city would take a huge economic hit if they close the Champlain Bridge preemptively, but it wouldn’t surprise me one bit to find out that somewhere in Ottawa there’s a group of twisted shit heads who have been advised by a major insurance agency that the economic hit of shutting down the link early outweighs the economic and psychological hit of the scores of human lives that will most certainly be lost if and when it collapses, plunging the victims into the Saint Lawrence River  — one of the most merciless and unforgiving rivers in North America.  This immoral logic of hoping that the replacement bridge is finished construction before the original one falls is nothing short of insanity.  It’s time to stop the madness and close it now.

Last year I was talking to someone whose boyfriend is a city inspector who looks for the weaknesses in the city’s bridges, tunnels, overpasses, etc.  That person told me how her boyfriend refuses to tell her what he knows because she would never sleep a wink — the information is simply too horrifying.  All the more reason to get drunk I guess.  Which reminds me… 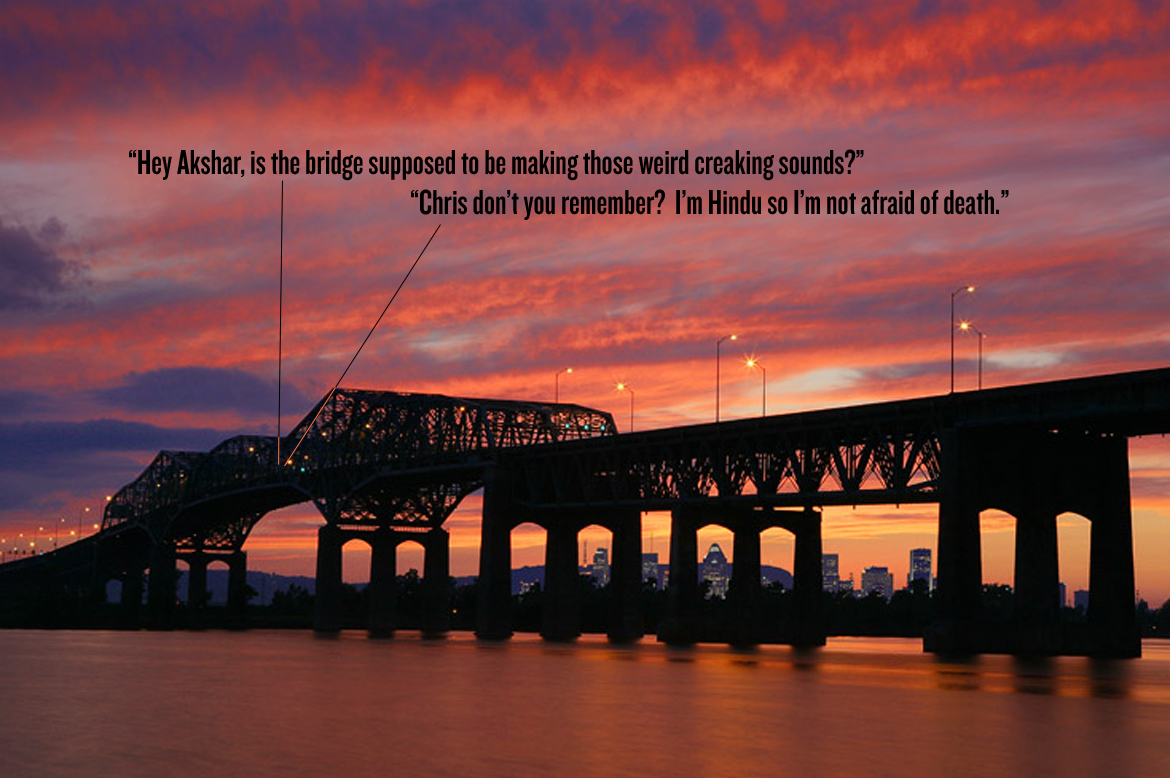 Previous post:
LINKguide (July 14, 2011) Next Post:
The Trailer For Soderbergh’s Virus Outbreak Movie “CONTAGION” Is Good On So Many Levels