The House Of Faberge Is Being Relaunched, Opening Two New Locations In London And New York

The iconic jewel-couture egg designs of Faberge are coming back.  The House Of Faberge is being relaunched for the first time since the Russian Revolution in 1917 brought an immediate end to the Romanov Dynasty and the House Of Faberge.  The new company has restored its ties to direct descendents of Faberge, including the great grand-daughter Sarah Faberge (although I’m not sure why this has any meaning whatsoever: since when is being talented in jewelry design or industry a genetic gift?)

The company has created twelve brand new couture egg pendants under the umbrella of “Les Fameux de Faberge” collection, retailing for up to $600,000 each.  The “Les Fressons de Faberge” collection will be a sister line of fine jewelry egg pendants at lower price points.  As Reuters elaborates, “Faberge is now looking to re-create high jewelry eggs by using innovative design and craftsmanship and high quality gemstones, such as its one-off Diamond Egg, made from titanium, a lightweight metal, coated with 66.4 carats of intricately cut white diamonds of high clarity. The titanium structure weighs less than the diamonds.” Faberge plans on opening two brand new boutiques in New York and London (Faberge closed their famous London Bond Street Location in 1915), bringing the total number of showrooms to three with their existing Geneva location, and the company is officially taking custom orders for these high end works of art.  Faberge had produced over 155,000 items spanning jewelry, objects, tableware and accessories ranging from cigarette cases to crochet hooks. The first of the 50 world famous Imperial Faberge eggs was the “Hen Egg” of 1885, with the “Steel Military Egg” of 1916 being the last completed.

I am a die hard lover of all things Faberge, and there really is nothing I would not do to own one of these beauties.  I remember back in the late 90s I was fortunate enough to see the Forbes Museum exhibition in New York featuring several Faberge eggs from their private Forbes collection and was absolutely blown away.  There really is no comparison to the Faberge eggs in the history of art, and news such as this is terribly exciting.  I hope the company can maintain the unparalleled level of quality that Carl Faberge achieved while he was alive, and I can’t wait to see what direction they take these designs.  To read more about the history of the famous eggs you can read this post I put together last year: “The Story Of The Romanov Dynasty And The Fabergé Egg“ 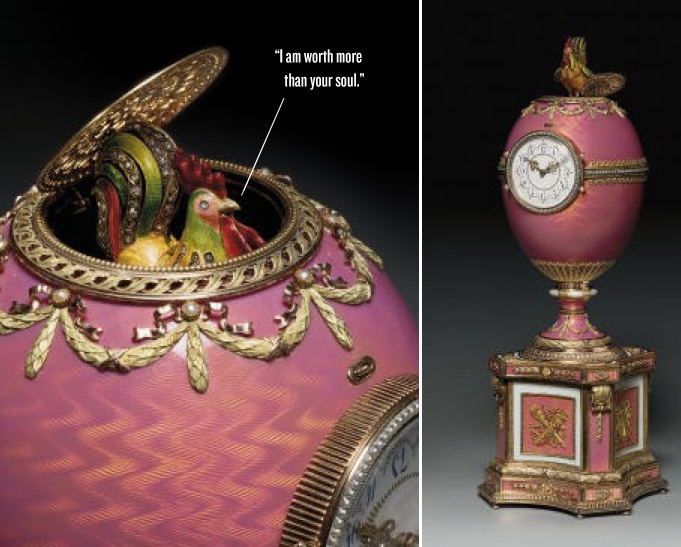