Somehow I’ve resisted the use of GRINDR, the ubiquitous iPhone app that can tell you where the nearest/hottest gay man is so you can bump uglies — I mean, “get to know eachother.” A friend of mine lives in a small British town with a population of 300 homes and recently noticed one night how something unusual was going on with his GRINDR app: “I live in a village of 300 houses and there is someone on Grindr 460 metres away!” An hour later he FB’d again: “There must be some homo party going on that i don’t know about as now there is another person 190 metres away!!! The men in the white pointed hats will be swarming through soon.” At a recent concert I was with another friend of mine who pulled out his GRINDR and noticed there was a hunky gay man a mere 3-metres away.  Of course we spinned our heads around to track him down but the possible love connection remained elusive.  Over and over again I keep noticing the massive popularity of GRINDR, which I can confirm is a massive success judging from the number of my friends of mine in Montreal who are addicted to it.  With more than 1,000,000 users in 180 countries, including Iraq, Iran, and Haiti, it’s being dubbed a “revolutionary dating tool” as well as “the scariest gay bar on earth that is all over the earth.” For the GRINDR newbies out there, Vanity Fair author Matt Kapp decodes the lingua franca of the smart-phone-assisted gay dating app and wonders if GRINDR can translate into hetero. Here’s a few excerpts:

A smart, attractive, chronically single friend of mine had been feverishly fidgeting with his iPhone for half a dozen blocks, somehow navigating the crowded sidewalks without once lifting his gaze from the screen. “Here’s one … 1,127 feet,” he muttered. And then, “Oh, 413 feet!” Sensing my annoyance, he showed me his phone: dozens of little thumbnail pictures of guys, with little blurbs about themselves, organized from top to bottom in order of proximity. Suddenly, it became clear to me what his excitement was about. Could this crude little iPhone app be every single gay man’s dream: to be able to cruise anywhere, anytime? Shopping? Why not! Meet me in Aisle C! Killing time at the airport? I’m sitting at Gate 17. At the gym? A no-brainer. Even at gay bars: cruising within cruising.

… GRINDR is dominated by two warring archetypes: the shirtless, alpha-male Headless Torsos and their archenemies, the fussy, uppity Faces. The Headless Torsos see GRINDR as a pure, single-function tool for facilitating hookups, not a social center for chatting and making friends. Spartan wordsmiths, the Headless Torsos are fluent in just a handful of words and phrases, like “Hey,” “Sup,” and “Who’s hosting?” The Faces see GRINDR more as a multi-functional public square and are convinced they hold the moral high ground. Why can’t you Headless Torsos just man up and pan up to include your faces? Occasionally a virtual bar brawl between the Headless Torsos and the Faces spills out onto the sidewalk. One Face fires off a warning shot in his blurb: “I’m not into headless torsos and ‘hey’ is for horses.” A Headless Torso responds by tagging himself  “Headless Torso” and fuming, “I already have friends!” There are plenty of vigilante crossing-guard types eager to referee. “If you can’t be a gentleman at least be polite,” scolds one. It’s no wonder that with all the commotion some guys are perplexed over how to behave or what to write on GRINDR. “Um, not sure what to write here,” confesses Tom, gingerly dipping a toe into the cauldron.

… I’ve read or heard various utilitarian-themed anecdotes about GRINDR: the guy who got a job with an Italian acting troupe after meeting its director on GRINDR; the guy who got locked out of his apartment at three a.m. but found a suitable place to crash for the night thanks to GRINDR; the guy who’s new to town and uses GRINDR to meet friends. Not to mention the irresistible GRINDRing-on-a-plane stories. But for me, GRINDR hasn’t proven very useful as a tool, sort of like the alligator wrench in the workshop. In the six months I’ve been on GRINDR, it’s provided me with a few new Facebook friends, and I reconnected with an old acquaintance for a pleasant Sunday brunch. Modest gains indeed, given the amount of time I’ve spent on GRINDR. When you boil it down, GRINDR is really just another time-sucking techno toy, another trendy distraction of the Gadget Era, albeit one carrying the faint hope of sex or friendship. Call me old-fashioned, but I’m nostalgic for the pre-mobile-device days, when a night out on the town held the promise of adventure—or at least the unknown.

To read the full Vanity Fair article with news about the straight iteration of the app, be sure to visit VanityFair.com. 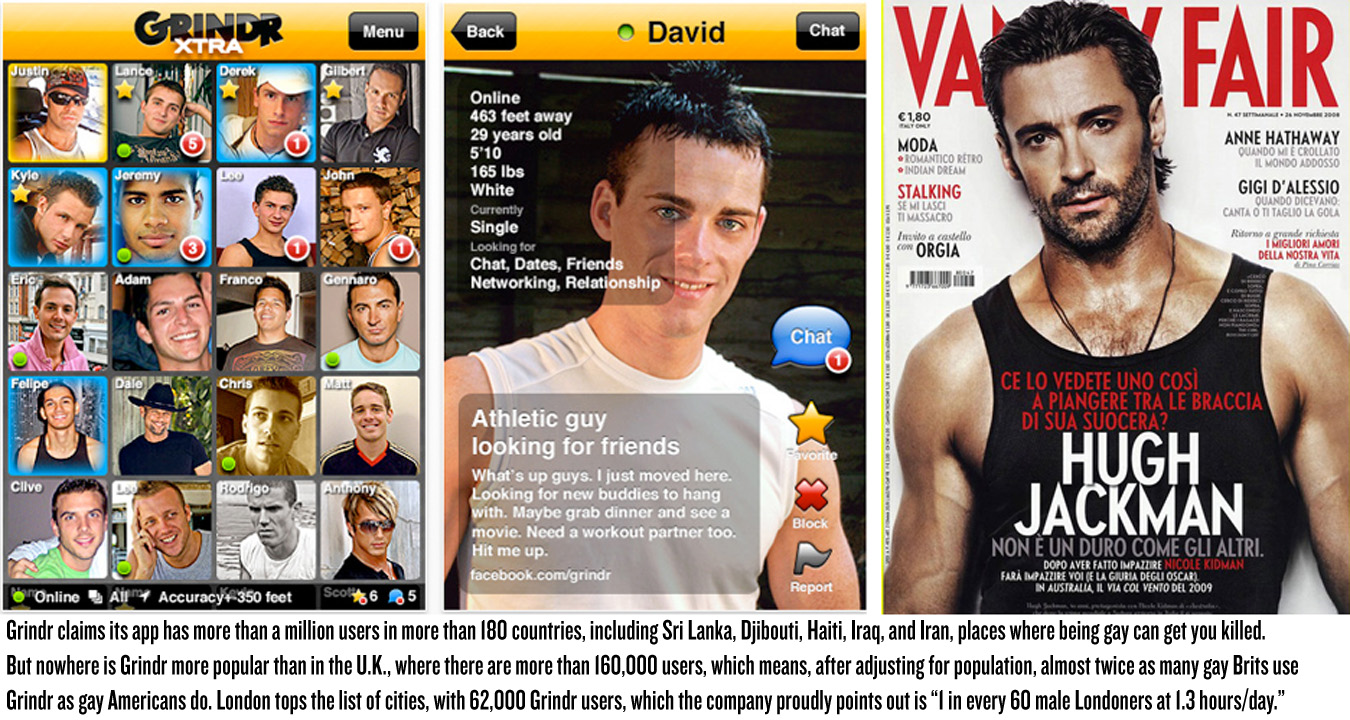