It was revealed today that the Navy SEAL team that found and killed the most wanted man of the 21st century had been practicing this raid in a full scale replica of the Pakistani compound where Osama bin Laden was hiding out.  The trials were going on in early April until the SEALS were confident they had the place burned into their memories with all possible outcomes rehearsed.  The most interesting part of this insight into their training was the level to which it focused on people (apart from the Black Hawk helicopters, hyperspecdtral imagers, and other complex technology used).  At the end of the day, this devil met his end at the hands of elite super-trained human warriors.  Here’s how the raid unfolded: back in August the CIA had been following one of Bin Laden’s couriers for a few years when he finally led them to the Waziristan Mansion in Pakistan.  The residents of this $1,000,000 compound with 18-foot tall perimeter walls where trash-burning was the norm (as well as many other security measures) were unknown, but over time the CIA decided there was no one else it could be.  They finally found him.  Popular Science describes what happened next:

In March, President Obama authorized a plan to bomb the compound using B2 stealth planes carrying 2,000-pound ordnance. But ABC News reports the president learned the compound would be reduced to rubble and changed his mind, partly because of the risk of civilian casualties and partly because the destruction would mean there was no proof the leader of al Qaeda was dead. Then he ordered in the SEALs instead. SEAL Team Six practiced at Camp Alpha, a segregated portion of Bagram Air Base in Afghanistan, using a replica of Waziristan Mansion. Team Six, also known as DevGru (the Naval Special Warfare Development Group), is part of the Joint Special Operations Command, the same folks who took out a team of Somali pirates two years ago to rescue a merchant marine captain.

Obama approved the raid Friday morning then went to the planned Space Shuttle launch and also toured parts of the south devastated by one of the worst tornado outbreaks in American history.  The raid was scheduled to go down on Saturday night to take advantage of moonlight, but with the overcast weather in the area at that time, the raid was postponed to Sunday night.  The SEALS boarded modified Black Hawk helicopters at Ghazi Air Base in Pakistan and went straight to the Waziristan Mansion.  They did not alert Pakistani officials.  U.S. authorities have not confirmed any extra air support, but reports have pointed out that it’s not likely the CIA and JSOC would send in a bare-bones team to risk encountering terrorists capable of destroying helicopters (one actually did get shot down).  This means there was likely only air cover — probably armed drones or Air Force gunships. The SEALS burst in, a massive gun fight ensued, they ordered Bin Laden to surrender, he refused, and they shot him twice in the left eye.  ABC News reports this style of “double tap” in the head is standard procedure.  His body was swiftly taken for DNA testing to confirm it was really him.  Once confirmed, his body was placed on the U.S.S. Carl Vinson and buried at sea according to Islamic rites. A young woman as well as four men were killed inside the compound.  No SEALS were injured in the raid. U.S. officials have not yet decided if they are going to release photographs of his body. Video of the sea burial of Bin Laden’s body has been shown to select reporters inside The White House.

The location of the compound was added to Google Maps within minutes of Obama’s announcement.  Part of the reason it was such a delicate site is its proximity to several landmarks, a clinic for women and children, and a Pakistani military school of “Westpoint stature”. U.S. intelligence reveals the compound was likely built in 2005 for the sole purpose of hiding Bin Laden.  The SEALS were in and out in less than 40 minutes, and they also captured computers and other valuable intel that will likely lead them to high-ranking al Qaeda figures and funding sources.  The United States is on alert for retaliatory attacks (i.e. airports, embassies, public transit systems, etc.) 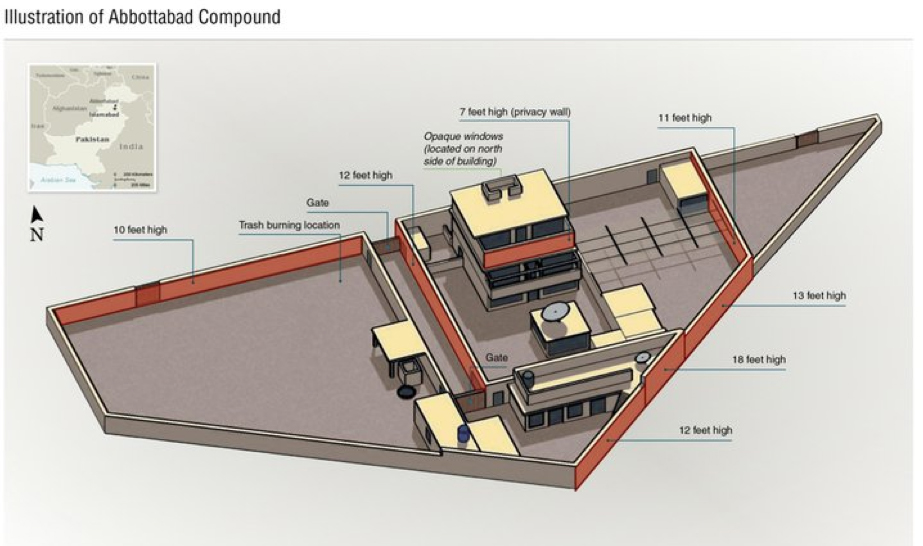