Canadians are getting their balls busted at the gas pumps these days with prices in excess of $1.30/liter ($4.95/gallon).  So I’m not exactly shedding a tear for Americans who are collapsing with panic attacks at the sight of $3.86/gallon gas which seems to be the average down there as of this morning.  Things are only going to get worse because it’s looking like this whole “peak oil” business is turning out to be as real as climate change.  The big debate right now in the States is whether or not to drill for oil in pristine natural locations (i.e. Alaskan national parks, more rigs in the Gulf of Mexico, etc.)  Well, looks like you can forget about that option having any effect of lowering the price of gas EVER.  The Atlantic just published this eye-opening report this morning showing a breakdown of what determines gas prices.  Even if American drilling were to double instantly, the resulting benefit would translate into getting a free one-second squirt from the pump.  The bulk of the price is determined by supply and demand, and here’s why:

Fuel demand from China, India and Brazil — three countries with a combined population of 2.7 billion — is the chief factor behind rising prices. China’s fuel demand increased 12 percent in 2010. Meanwhile Saudi oil production has fallen, as AEI’s Steve Hayward told me. Perhaps the Saudis are pulling back after overstating their reserves, in which case we’re in serious trouble. Or perhaps they’re accepting higher prices in the short term to spend more money on their people to avoid a Libya-type revolution, in which case the production shortfall should be temporary. Either way, supply matters and there’s less of it.

To read the full story and get the full explanation behind the price of gas just head over to The Atlantic. 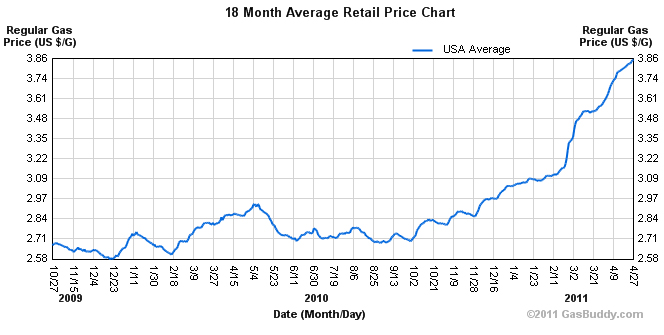 Previous post:
Ira Glass On “The Gap” Between An Inspired Person’s Taste And Their Abilities, And Why It’s So Important To Never Stop Creating Next Post:
Jeanne Beker’s 3-Part “Fashion Television” Report On The Royal Wedding Dress