60 Minutes Gets An Impossibly Rare Tour Of The Vatican Library’s Mindshattering Works Of Art (NOTE: You Absolutely Must Watch This)

I’m about as far away as you can get from being a Catholic.  I have deep objections to all of the Big Three religions as a matter of fact, because I feel they’re missing the point entirely.  I do believe Jesus walked the earth 2,000 years ago, but the message he was trying to communicate has been completely dissolved over time.  Heaven is not a patch of divine real estate in the sky — it is enlightenment.

Enlightenment is something that Jesus, Buddha, and Muhammad were all lucky enough to achieve and wanted so badly for us to achieve it to.  Through the centuries, however, this powerful message has been contaminated by sticky fingers and power-seeking grubs with self-serving needs in their hearts.  One of my biggest spiritual influences is the firmly anticlerical Thomas Jefferson who took the purest moral tenets from Christianity and discarded the rest.  He even went so far as to edit his own version of the bible.  Amazing.  Jefferson once said, “In every country and every age, the priest has been hostile to liberty. He is always in alliance with the despot…they have perverted the purest religion ever preached to man into mystery and jargon, unintelligible to all mankind, and therefore the safer for their purposes.” But as out-of-touch with reality as the Vatican is (and always has been), I do have the utmost respect for the incomparable contributions they have made to all-things luminous such as art, architecture, and music.  60 Minutes was recently granted an extremely rare opportunity to tour the Vatican Libary.  Morley Safer perfectly describes the collection as “the attic of Western civilization” because it houses the most significant and priceless works of art on earth, and is our history’s crown jewel.

Back in 1998 I was 4 years into my 5-year Bachelor of Architecture program and spent a semester studying in Rome.  Me and 20 of my closest friends were fortunate enough to get a tour of the Gardens Of Vatican City as well as the Vatican Casino of Pope Pius IV.  I still get the shakes every time I think about that day.  The power and gravity of that place almost defies description.  It’s a good thing my friends and I weren’t granted permission to the Vatican Library though.  I think I would have seriously lost my shit in there.  Combine all the freak-out reactions from the lucky kids who won the Golden Ticket tour of Willy Wonka’s Chocolate Factory and multiply that by 1000 — that would have been me in the Vatican Library.  It would have taken Willy Wonka The Pope himself to calm me down.  I’ve never been more jealous of Morley Safer in my life!

NOTE: IF YOU HAVE TROUBLE WITH THE CBS VIDEO PLAYER BELOW JUST CLICK HERE. 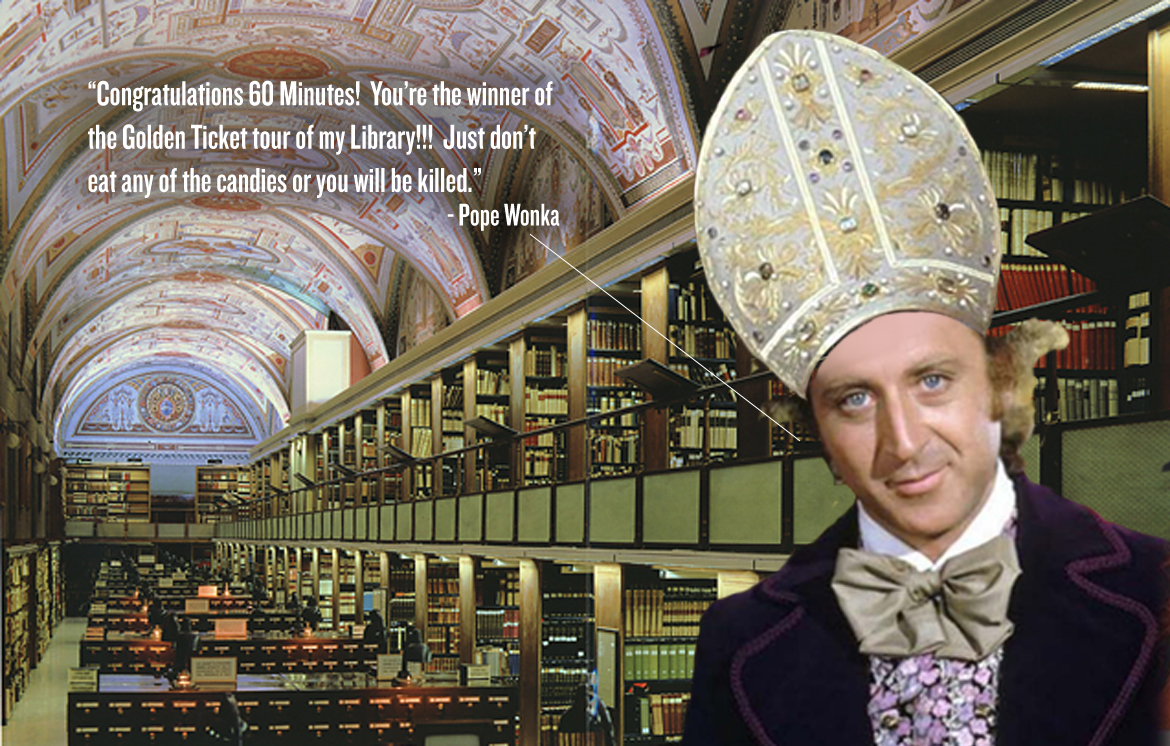 Previous post:
21-Year-Old Stanley Kubrick’s First Assignment As A Photojournalist For The 1949 Story “Chicago: A City Of Contrasts” Next Post:
Popular Science Ranks The Hottest Gadgets Of April 2011 (Ready To Be Outdone By the May Gadgets)