The “.ly” Domain: How Gadhafi Is Making Money Off Everyone From Charlie Sheen To Kim Kardashian To The White House Itself

A linguistic anomaly might be Col. Gadhafi’s most unlikely asset: Libya’s Internet domain happens to be the English language’s adverbial suffix: ly. The reason this is such a huge deal is there are tons and tons of websites that take advantage of this adverbial ending to make their websites sound more appealing (i.e. cruel.ly, gris.ly and smel.ly).  The bigger deal is that Twitter uses this suffix in their URL-shortening technique in order to compress long addresses down to just a few letters (i.e. http://ow.ly/4qC3v).  Punch in the Ow.ly address, and a request will move to one of Libya’s five servers—two inside Libya, two in the U.S. and one in Europe. The .ly server forwards the message to Amazon.com Inc., the contractor HootSuite uses for its Web service, where the 4gC3v Ow.ly code is linked to the original website.

The United Nations, the North Atlantic Treaty Organization and the U.S. Air Force all directed Twitter followers to Internet domains controlled by the regime of Col. Moammar Gadhafi.  And they aren’t the only ones to send their Internet followers through Libya. So have House Speaker John Boehner (R., Ohio), Stanford University, Charlie Sheen, the White House, Kim Kardashian, the U.S. Chamber of Commerce, Paul McCartney, the Federal Bureau of Investigation and thousands of others. The .ly domain is managed by Libya’s General Post and Telecommunications Co., whose chairman, Mohammed el-Gadhafi, is the dictator’s oldest son. It says it has rented out more than 10,000 .ly domains, either directly or through resellers. Human Rights Watch, which has ripped the Gadhafi regime a new asshole for blocking Internet access within Libya, is one organization that unwittingly used the .ly addresses. “It’s ironic and a little bit distasteful,” says Tom Malinowski, the group’s Washington director, upon learning the news from a reporter. A spokesperson for House Minority Leader Nancy Pelosi (D., Calif.) said her office was unaware of bit.ly’s Libyan connection. But “given this new information, we will no longer be using this free service,” the spokesman said.

To learn more details about this twisted (and I must admit — hilarious) story you absolutely must read the entire piece over at The Wall Street Journal. 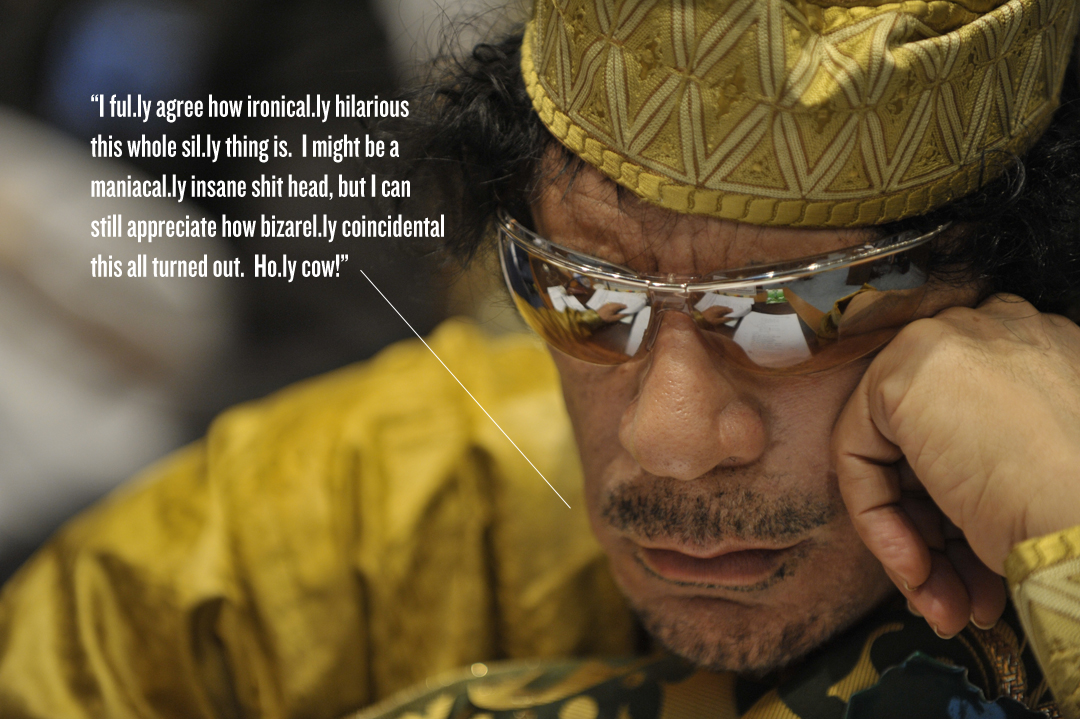