The Atlantic never ceases to impress me.  Their selection of stories and their angle of representation strikes the strongest chord in what I look for in journalism. Their latest offering is this incredible piece on the preservation of Thomas Jefferson’s personal bible.  One of America’s founding fathers, Jefferson spearheaded the nation’s separation of Church and State. He rejected the orthodox Christianity of his day and was especially hostile to the Catholic Church as he saw it operate in France (he was minister to France from 1785-1789). Throughout his life Jefferson was intensely interested in theology, biblical study, and morality. As a landowner he played a role in governing his local Episcopal Church; in terms of belief he was inclined toward Unitarianism and the religious philosophy of Deism. Under the influence of several of his college professors, he converted to the deist philosophy:

“Jefferson was a deist because he believed in one God, in divine providence, in the divine moral law, and in rewards and punishments after death, but did not believe in supernatural revelation. He was a Christian deist because he saw Christianity as the highest expression of natural religion and Jesus as an incomparably great moral teacher. He was not an orthodox Christian because he rejected, among other things, the doctrines that Jesus was the promised Messiah and the incarnate Son of God.”

Hallelujah! In private letters, Jefferson refers to himself as “Christian” (1803): “To the corruptions of Christianity I am, indeed, opposed; but not to the genuine precepts of Jesus himself. I am a Christian, in the only sense in which he wished any one to be; sincerely attached to his doctrines, in preference to all others; ascribing to himself every human excellene.” Jefferson believed in the moral teachings of Christ and edited his own compilation of Christ’s teachings leaving out the miracles. Jefferson was firmly anticlerical saying:

“In every country and every age, the priest has been hostile to liberty. He is always in alliance with the despot…they have perverted the purest religion ever preached to man into mystery and jargon, unintelligible to all mankind, and therefore the safer for their purposes.” Jefferson told Adams he had doubts on the existence of invisible beings such as God, angels, and the soul writing, “To talk of immaterial existences is to talk of nothings.”

I, too, was raised in a Protestant upbringing and so many of the moral tenets of Christianity are part of my own moral constitution.  I have as much reverence for the Bible as I do reservation, because the poor thing has been passed through so many sticky fingers of editors through 2,000 years one has to be very judicious when reading it.  Which is all the more reason Jefferson felt so compelled to make his own version.  Here’s an excerpt from The Atlantic:

How do museum professionals define the condition of an artifact, and determine whether it can be used or exhibited without harm? The answer is by very, very careful investigation, especially when the artifact is the Jefferson Bible, otherwise known as ‘The Life and Morals of Jesus of Nazareth’. Using excerpts from the Four Gospels of the New Testament, Thomas Jefferson arranged the text to tell a chronological and edited story of Jesus’ life and moral philosophy. A national treasure, the Bible recently received microscopic-level examination by a team of conservators trained in both book and paper conservation and by conservation scientists who specialize in materials analysis. A University of Hawaii intern created a purpose-built database to capture all the data observed. How much data? The Jefferson Bible conservation survey database holds over 200 points of observation for each page, and over 20,000 for the entire book. The Jefferson Bible was made by Thomas Jefferson himself between 1819 and 1820. He cut out Biblical passages which were important to him, and glued them, scrapbook style, into folios of blank paper. Verses were arranged chronologically and in columns in four translations. Next to the English language verses are columns of the same verses in French, Greek and Latin. Jefferson wrote notes in the margins in iron gall ink. The book is made from twelve different types of paper, six different printing inks, and at least three different home-mixed iron gall ink recipes. His bookbinder, Frederick Mayo, bound the 43 folio pages in a red morocco leather binding.

You can read the rest of this brilliant piece over at The Atlantic. They published the full article with the permission of the Smithsonian’s National Museum Of American History blog. And be sure to watch this great video piece on the Jefferson Bible’s preservation courtesy of The Smithsonian Channel: 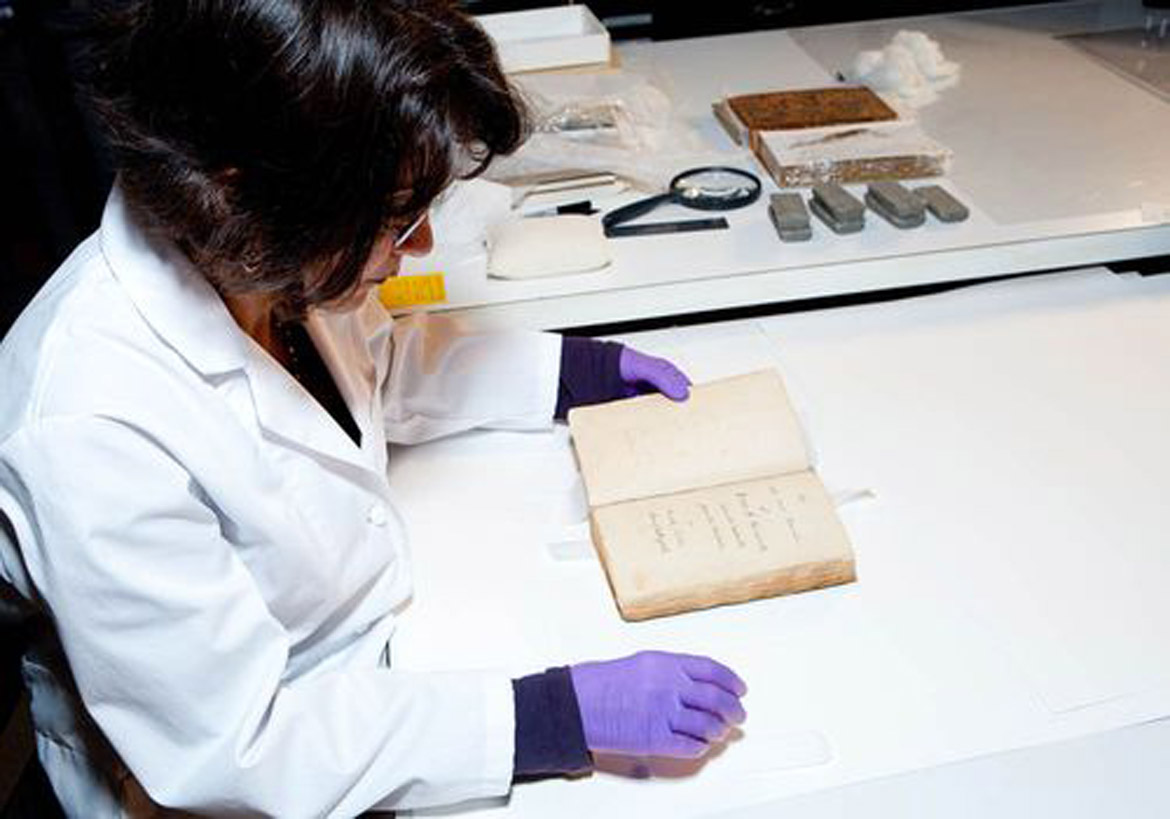 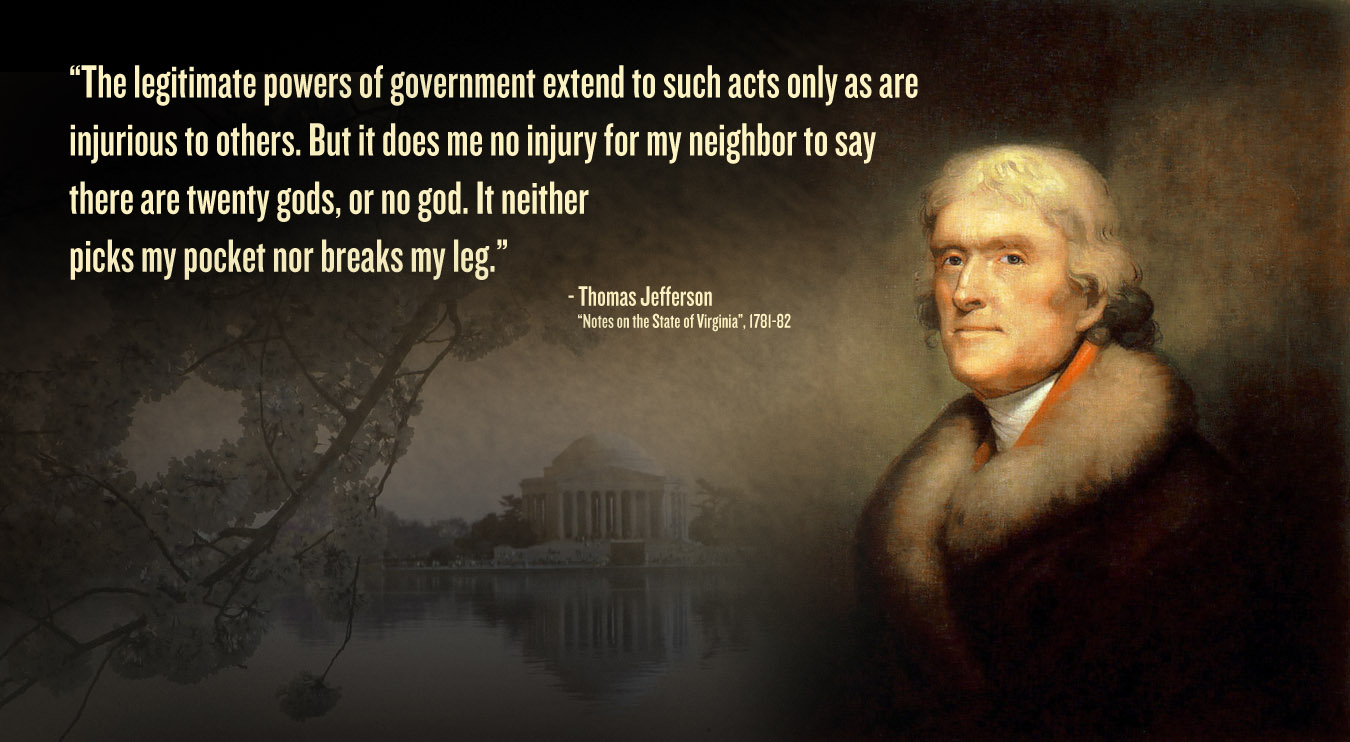 Sources: The Atlantic and Wikipedia