First publised in Mind Hacks (March 23, 2011) by Vaughan Bell..☛..The “Regrets of the Typical American” have been analysed in a new study that not only looks at what US citizens regret most, but provides some clues for those wanting to know whether it is better to regret something you haven’t done, or regret something you have. The research has just been published in the journal Social Psychological and Personality Science and was carried out by psychologists Mike Morrison and Neal Roese who used random dialling to call people and survey them about a troubling regret. As blues singers have suggested for years, love tops the list (click for larger version): 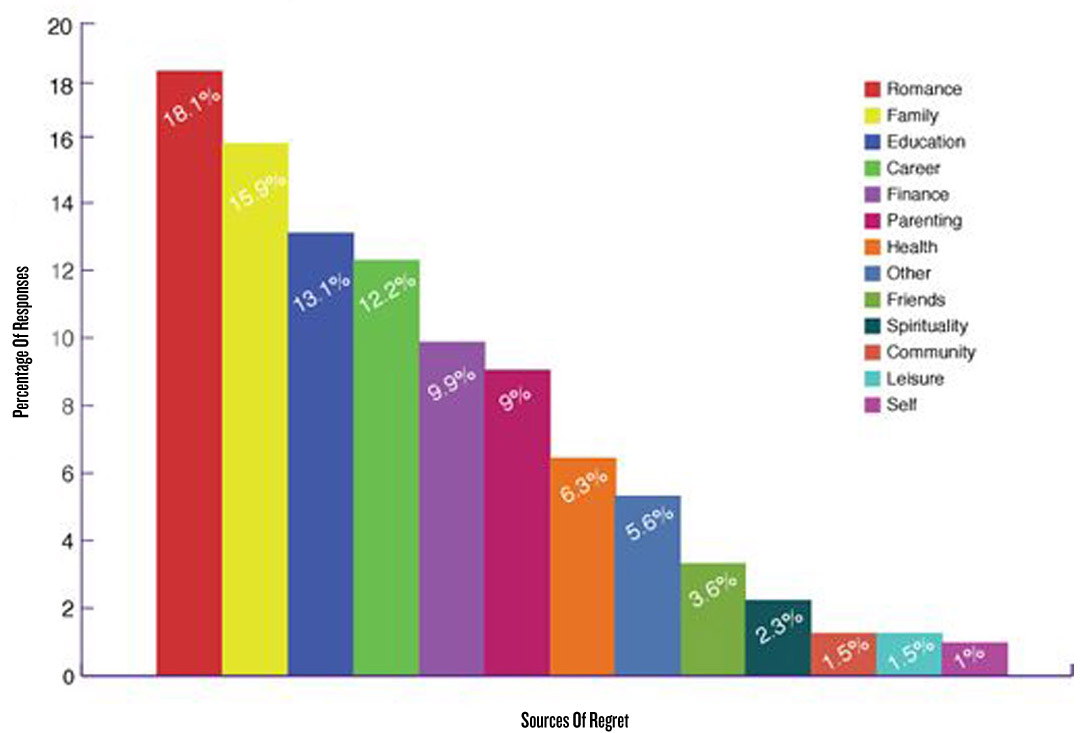 Previous studies on regret have talked to college students who are probably not ideal for this sort of research as they tend to be quite young and, quite frankly, really haven’t fucked up enough to give a good idea of what the average person laments about their life. This was the first study to survey a representative sample of all ages, incomes and education levels and although love topped the list, there were some interesting differences in the details.

Women, who tend to value social relationships more than men, have more regrets of love (romance, family) compared to men. Conversely, men were more likely to have work-related (career, education) regrets. Those who lack either higher education or a romantic relationship hold the most regrets in precisely these areas. Americans with high levels of education had the most career-related regrets. Apparently, the more education obtained, the more acute may be the sensitivity to aspiration and fulfillment. Moreover, the youngest and least-educated people in our sample, who most likely possess the greatest capability of fixing their regrets, were indeed the most likely to provide fixable regrets.

The study also found that regrets about things you haven’t done were equally as common as regrets about things you have, no matter how old the person. The difference between the two is often a psychological one, because we can frame the same regret either way – as regret about an action: “If only I had not dropped out of school”; or as a regret about an inaction: “If only I had stayed in school.” Despite the fact that they are practically equivalent, regrets framed as laments about actions were more common and more intense than regrets about inactions, although inaction regrets tended to be longer lasting. So the question of whether it is better to regret something you haven’t done than regret something you have, might actually be answerable for some people, but we still don’t know how much choice we have over adopting the different views of regrets or whether this is largely determined by the situation.